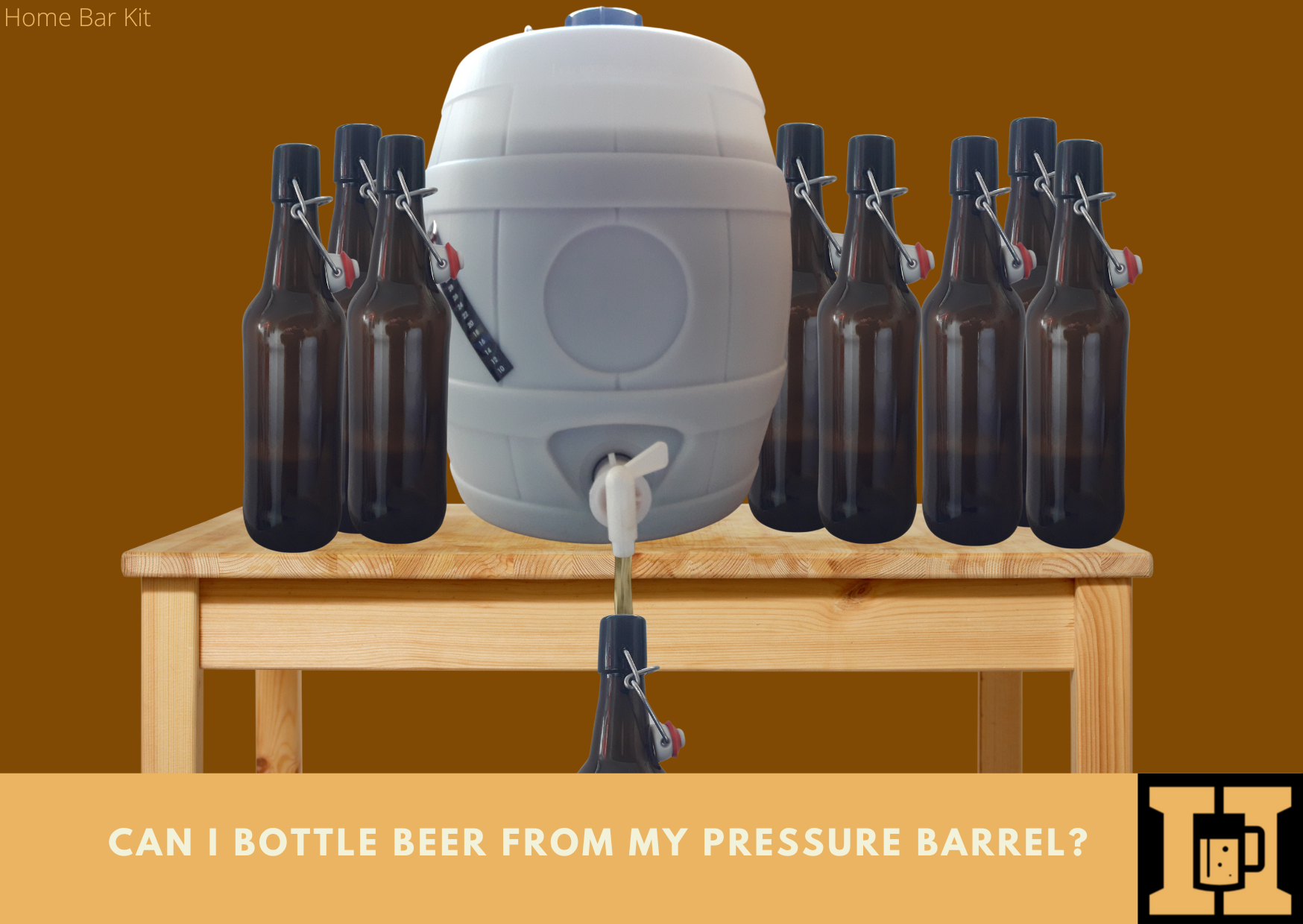 When we use a pressure barrel for the secondary fermentation of our beer we can dispense our beer straight from the barrel. But what if we get requests from friends for a bottle of our beer. Which begs the question can I bottle beer from my pressure barrel?

I thought it would be perfectly okay, however I decided on a little research first. There are mixed opinions on whether it is a good idea to do this or not.

Can I Bottle Beer From My Pressure Barrel?

The answer is yes you can, but be advised of what can happen to the beer that you do bottle. There is the possibility that the beer you bottle could become oxidised and suffer from off flavours. As well as being difficult to bottle because of foaming issues from a beer that has already been carbonated in the pressure barrel.

The risk is I would be giving a bottle of beer to a friend that might taste pretty bad. That is something I don’t want to do.

The Right Way To Finish Your Beer

There are two basic ways to bottle our homebrew beer.

The first is to transfer the beer from the fermentation vessel into a bottling bucket. Add the priming sugar, wait briefly and bottle from there.

Although some do bottle directly from the fermentation vessel. By priming each bottle with the right amount of sugar.

Using a bottle filler or beer gun we would then fill and cap each bottle. The secondary fermentation then takes place in the bottle.

The bottles are then kept warm for a few days to kick start the secondary fermentation. After that they can be cooled for a week or two.

Once opened the beer should be clear and carbonated.

The second method is to transfer from the fermentation vessel into a pressure barrel for secondary fermentation to take place.

Clean the barrel and syphon with sanitiser and add all the priming sugar to the barrel. Then syphon all the beer into the barrel.

Keep warm for a few days and then cool down for a few weeks. Once ready to drink the barrel becomes the beer dispenser.

Can I Bottle Beer From My Pressure Barrel?

There’s that question again, so is it possible without spoiling the beer?

There are those that say not to do it because it can spoil the beer. The beer in the pressure barrel has already gone through the secondary fermentation stage. It has cleared and is now carbonated, basically it is ready to drink.

To now bottle that could be messy as trying to bottle carbonated beer is a foamy business. This can be calmed down a little with a bottom filling bottle filler.

Whilst filling the bottles, the beer is mixed with air which will cause it to oxidise. This could lead to infections and off flavours.

The other problem is the beer you bottle may be flat when opened. This can be overcome by adding a touch of priming sugar to each bottle.

So it doesn’t sound like a good idea, however some do it with success.

Some Say Do It

There are those that do bottle beers from the pressure barrel after it has finished the secondary fermentation process.

The main reason for doing this is obviously to share the beer. But also to chill the beer, because putting the pressure barrel in a fridge may be a no no.

It is okay of you have a fridge dedicated as a fermentation cabinet, you can now put your pressure barrel in it and set it to the desired temperature.

But what if you want to enjoy your beer chilled rather than at room temperature.

This is where bottling from a pressure barrel could be acceptable.

Bottling and chilling to be consumed within a day or two, should be fine. The beer will be drunk before anything bad can happen to it.

But left for several weeks could mean a bad beer. So for our own consumption it is okay to bottle a few and chill them to be drunk in a day or two.

If sharing with friends we would have to make it clear that they need to drink it within the same time span.

Bottling For A longer Shelf Life

One method I have seen described is to transfer the beer from the fermentation vessel into a pressure barrel with half the amount of priming sugar.

This is left to mature for 2 to 4 weeks. The beer is then transferred to a bottling bucket with the rest of the priming sugar. Now it is bottle and stored warm for a few days before then being stored cool.

Apparentley the results were good with a clear carbonated beer and less sediment in the bottle.

Is there a solution where I can bottle some beer, but keep the majority in the pressure Barrel?

This is the method I shall use for my next brew and beyond.

I will transfer the beer from the fermentation vessel to the pressure barrel with the right amount of sugar.

Leave it for half an hour to make sure the sugar has dissolved into the beer. I will use this time to sanitise and rinse the bottles I want to fill.

Then I will go ahead and fill those bottles, and the rest will stay in the pressure barrel. Both the bottles and the barrel will then be kept warm for 4 to 5 days. Then cooled down and left to condition.

This way I will have the bottles I need without causing any problems that filling later might cause.

Basically the pressure barrel is being used as a bottling bucket as well as a secondary fermentation vessel.

It seems there could be problems filling bottles with beer that have finished the secondary fermentation stage.

However by filling them straight away those problems should be avoided. That will be my method going forward.

For now with my current brew which is just about ready, I may fill a few bottles to chill. Just to see how they compare with straight from the barrel. But I will make sure they are consumed within a few days.

I guess homebrewing does mean a certain amount of personal experimentation. What works for one, may not work for another.

What works for you? Share your thoughts on this subject about bottling beer from the pressure barrel below.

Any tips can help other homebrewers, so share away.