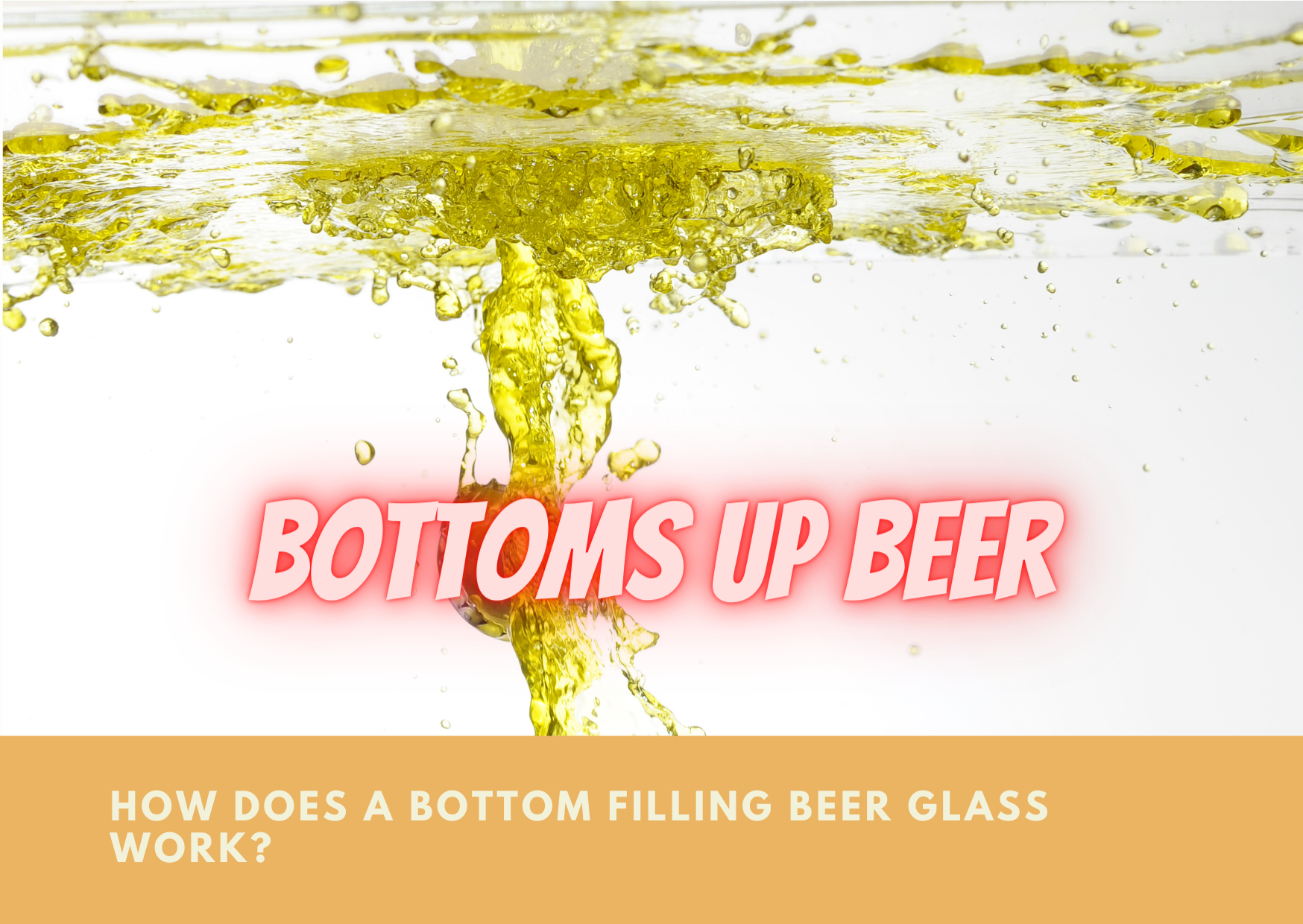 The new way is to fill the glass from the bottom up, and its not that new either. It was invented in 2008 by Josh Springer and quickly caught on as a revolutionary way to serve beer.

How Does A Bottom Filling Beer Glass Work?

The glass has a hole in the bottom with a metal rimmed seal and a round magnet disc. The glass is placed on a special dispenser that breaks the seal. The beer flows from the dispenser and fills the glass. Lift the glass and the magnetic disc reseals the hole.

Bottoms Up Beer is the company that sells the bottom filling beer glass. It is not all about the glass though, there is a whole system needed to make this work.

There are several types, from small units that sit on top of the bar to large contained units. You have the option of a single dispenser or a row of many dispensers. A bottoms up beer system connects to kegs in the same way a normal tap system would.

See it working in the video, and then ask yourself, apart from being cool, what is the point?

What Are The Benefits Of Bottoms Up Beer?

Seeing the system in operation is great, it’s like some kind of magic trick. You would be forgiven in thinking it was just a gimmick, which has no real benefits.

There is a claim that this system can pour up to 44 pints in a minute with a single bartender. That is some going and the benefit is obvious if you run a very busy bar. It is as easy as placing the glass down and the dispenser does the work. A bartender does not have to supervise the pour, it is hands free. Imagine a bar had ten dispensers in a row, that is ten pints being poured pretty much at the same time.

There is little to no waste as it cuts out a bad pour which creates a large foam head. A perfect pint is poured each time and this will save beer, which will save money.

The units themselves can be programmed to pour three different size pours, a small beer, large beer and even a pitcher. All poured automatically and without waste.

Another small benefit is the custom discs, that can promote your bar or offers, which could bring in extra revenue.

Apart from the actual dispenser, there are a few other bits of kit that make up the whole bottoms up beer system.

You cannot use a standard glass, so special glasses are needed with a hole in the bottom. These come is different sizes, including a pitcher. A range of disposable polycarbonate glasses are also available, which are great for events and festivals.

Each glass will need a magnetic disc to seal the glass when it is full. These are sold separately and can be customized with a logo, or advertising. As the discs are throwaway items, customers can keep them as a memento. I am sure a lot of fridges will be showing off these beer discs.

Anything can be put on these discs, from a bar logo to advertising a future event. Bottoms up have their own range of designs, or will customize your discs for you.

As a busy bar owner, it is easy to see how an increase in profits can be had with this system. The pure speed of pouring will increase efficiency, as well as customer satisfaction. With pretty much zero waste it will also save money too.

Take a look at the traditional tap system against the bottoms up system.

The Bottoms Up Home Bar

Apart from the commercial system, there are smaller units designed for home use. A small cabinet which holds the keg, with a stainless steel top. The top has the dispenser built into it, as well as the programmer for glass size.

A bottoms up beer dispenser at your home bar is going to be pretty cool thing to have. As the commercial version it could save you a little beer too. When it comes to the other benefits of its counterpart, these won’t really apply to a domestic situation.

There is also a portable version of the bottoms up beer system. It is housed in an Igloo cooler on wheels, and has a dispenser on the top. Pretty cool for parties and small events.

There is no getting away from the fact that the bottoms up beer dispensing system is very cool. Visually alone it is an amazing thing, but it also comes with some great benefits too. The cost though is high for a commercial unit, so the investment is a big one.

An investment it is though, and for a busy bar, it will pay for itself with speed and beer savings. For a home bar it is also going to set you back more than a standard kegerator system. Although there is a small domestic unit called Beer Buddy. This houses the 5L party packs, and doesn’t hit the pocket to hard.

Share your thoughts on the bottoms up beer system below and whether you have seen it in action.

4 thoughts on “How Does A Bottom Filling Beer Glass Work?”