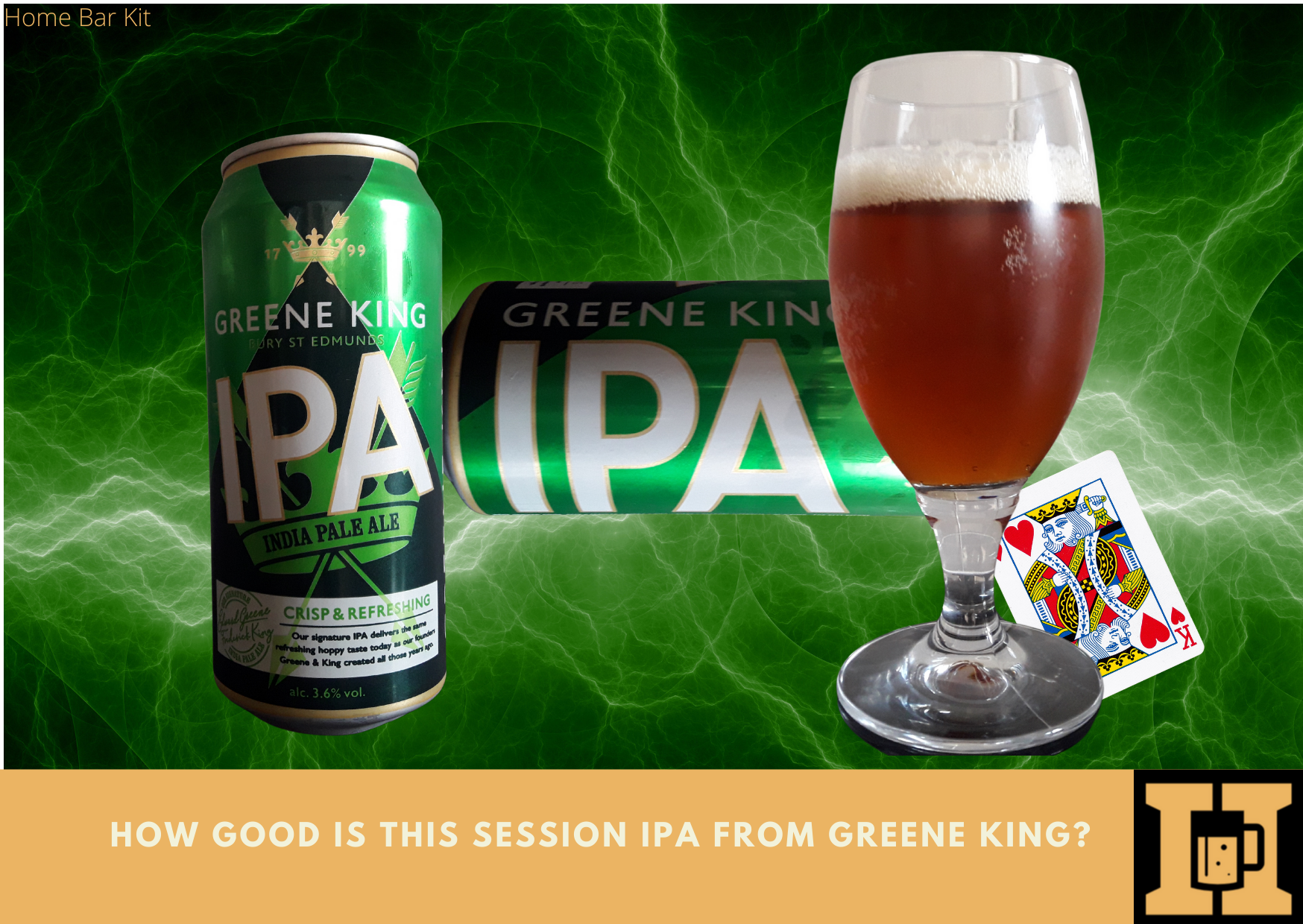 A flagship beer from a brewery that is over two hundred years old. So anyone would be forgiven for having high expectations. But how good is the session IPA from Greene King? Does it fall short of its acclaimed clean crisp moreish ale?

Can this old style IPA stand amongst the modern craft IPA’s and hold its own? You would expect a solid beer from such an old hand at brewing. Especially as this IPA is still brewed to the original recipe, have tastes changed enough for this to be a problem? There is only one way to find out.

How Good Is This Session IPA From Greene King?

It is not your typical IPA of today, and that is fine. However some will be put off by its strong bitter taste. It pours a mid brown with an ample foamy top. The nose is bitter caramel to the point of almost burnt toffee. A malty background offers the slightest citrus note floating on top. The bitter taste hits hard with a moderate hoppy feel and a caramel and burnt toffee edge. It tastes just like the nose and ends with a lingering bitter aftertaste. I quite like it with its loaded bitterness and it hits a rate my beer score of 4.1 – 5.0.

Although I like this beer, many will not and it could fall into the acquired taste bracket.

Greene’s Brewery was founded in 1799 by a young 19 year old Benjamin Greene in Bury St Edmunds, Suffolk, England. With steady growth after 37 years Benjamin handed the brewery over to his son Edward who continued to build and grow the business.

In 1887 Edward merged the brewery with a local competitor Frederick King’s Brewery. The newly merged business took on the name Greene King which still stands to this day. However the brewery went on to become the largest managed pub company in the UK. Greene King have over 3100 sites including breweries, pubs, hotels and restaurants.

Many merges and buy outs happened over the years which sees brands like Morlands Old Speckled Hen, Hardy’s and Hanson, Ruddles, Tolly Cobbold and the Belhaven Brewery in Scotland come under the Greene King umbrella. The largest buy out of some £773 million saw Greene King acquire the Spirit Pub Company.

In 2019 CK Asset Holdings a Hong Kong Based company took over the brewery. However brewing from Greene King still happens in Bury St Edmunds. Only time will tell if the company is sold off again or split and sold in parts.

How Good Is This Session IPA From Greene King?

So back to the beer then, Greene Kings session IPA, it is a mixed reception out there in the world of beer. Many beer lovers slate this IPA saying it is not hoppy enough or strong enough to be a genuine India Pale Ale.

Something that Greene King themselves are not bothered about. They are not about to change their IPA to please those who seek the standard of the new craft IPA’s. Those hop strong wild citrusy beers many have come to love, me included.

Instead Greene King have been a bit clever and done their research. The results put their session IPA at the foot of new cask ale drinkers, especially younger new cask ale drinkers. Their IPA fits perfectly with the profile of these drinkers. Seeking something more than lager, but not ready for all the bold IPA’s with the super strength hops and high alcohol content.

So Greene King are happy then, and instead of adapting their beer have given it a facial update. A new fresh design to catch the eye of their intended audience. Plus they have set out to educate how the beer is served, how to manage casks and serve the beer to get the best out of it. You can see how that training is delivered at the new training website Beer Genius.

Greene King are sticking to their guns and have faith in their long standing IPA. They describe it as a beer you would recommend to your friends. An easy drinking session ale that is crisp and refreshing with a hoppy taste and aroma.

The beer drinkers are split on this one then and Greene King does not care a hoot.

A Great IPA Or Not?

I think we have to take this beer as it is or what it stands for. We cannot compare this IPA with all those that have hit the market in recent years. For me it doesn’t deliver on that level and is not looking to either. It is old school quietly doing its own thing.

While the new kids on the block shout loud for our attention, it just sits back with all its experience and takes up the slack. It is traditional in the way it is brewed as well as the combination of hops and malts it uses.

Challenger, First Gold and Pilgrim make up the hop bill, giving a strong and spicy aroma with plenty of fruity bitterness and a touch of hoppy citrus. Pale Crystal and black malts give it a full body feel with caramel tones and a highly roasted bitter flavor.

It’s a bold beast that blends into its surrounding, fearless and forgiving.

It pours a mid brown caramel color with a handsome frothy top any beer would be proud of. This does fade, but leaves a thin cap that does decorate the glass as the beer descends.

The nose is a roasted bitter affair with a burnt toffee strength that overpowers the slightest of citrus notes. There is a strong promise of bitterness once you venture for that all important sip.

It doesn’t disappoint either it is a hard hitter on the bitter front. It does have a hoppy feel in the mouth with the slightest of citrus fruit coming through. This is overpowered by the caramel and burnt toffee edge. However the star of the show is the bitterness that is loaded into the whole experience. This carries through to the lingering aftertaste.

It is a clever little beer with the power of a full body, yet kind and forgiving in the strength category. An ale that feels stronger than it is, one you might not expect to have many of. But we are in safe hands, because at just 3.6% Vol a session beer it is.

When you put the current IPA market out of your mind and understand this beer for what it is, you get it. It is not going to set the world on fire, but it will be ever present and dependable when you just want a decent beer.

It sits comfortably in its vessel and is not phased by the competition.

Their traditional session IPA might split the crowd, but what else have Greene King got to offer. Like most breweries they have their core range of beers as well as some seasonal beers. However are these beers all like their session IPA. Are they all a traditional style? Or have they broken out and come up with some fresh new brews?

Yes they do have a good range of traditional ales. But they have let their brewers free on brewing some fresh new style beers too. I will balance the selection below with some old and some new beers to choose from.

So starting with a old beer we have Abbot Ale a rich and malty beer dating back to 1951 on the Greene King calendar. When first brewed Greene King named the beer through a competition. It was named after the Abbots from the famous Abbey of Bury St Edmunds. Simple but effective.

This beer has a fruity and floral air with hints of spice adding to the aroma. A base of grassy hop is laced with a rich biscuit flavor giving a rich and malty mouthfeel. At 5% Vol it is right on the top edge of a session beer.

I have had this beer in many years passed, so I will have to revisit to at some point to refresh the memory.

Launched in 2016 as a celebration to the capital city this amber ale is malty with a fruity hoppy background. A rich amber color with a generous white frothy top it looks the part. The promise is a roasted barley and clean hop flavor proving a crisp a fresh beer.

Whether that is delivered is another matter. But with pale and crystal malts it could be full bodied with a sweet caramel tone. The roasted barley could add some bitter acidity making this a decent beer. At 4.1% Vol it sits well within the session range, so could be a favorite beer to share with friends.

A more modern beer in the form of an American style pale ale. Greene King let the apprentice brewers go wild and come up with this Ice Breaker beer. A triple hopped beer that uses Simcoe and Citra hops giving it that modern craft beer edge.

The nose is hoppy with a tropical fruit aroma. The taste typical hoppy citrus with a sweet malt background to balance the bitterness. At 4.5% Vol it has a little bite but stays within the session range. I have had this beer before and from what I can remember it does have the hop and citrus kick with a bitter twist. I will have to visit again for clarity.

A beer that celebrates two great brewing nations. It brings together the finest US hops to give it that powerful citrus hit with the best English pale malt. This gives it that zesty citrus hop front with a moderate easy drinking base. Bold up front, but a little more relaxed to finish could make for a great experience.

At 4% Vol it can be enjoyed as a session beer and may deliver the more modern IPA feel. Not one I have tried yet, but it is now on my radar and will be sampled soon. There are plenty of other beers to try from Greene King as well as the other brands under their belt.

Greene King then a well established brewery that seems to know its own mind. It will not bend to please those that scream change. However it will provide other options that may satisfy their needs.

Some say that their session IPA is not a true IPA. I disagree, no it doesn’t play the same game as all the current craft IPA’s. It will not bathe your taste buds in a zesty tropical citrus frenzy. Yet it will quietly stand its ground and not be intimidated.

It’s a mild unassuming beer that serves a bitter edge and is easy to drink. A dependable staple ale that sits on the bar waiting for those that just want a beer. No fuss and no bells and whistles, its easy.

Give it a go and share your thoughts, what did you think of this crowd splitting IPA?