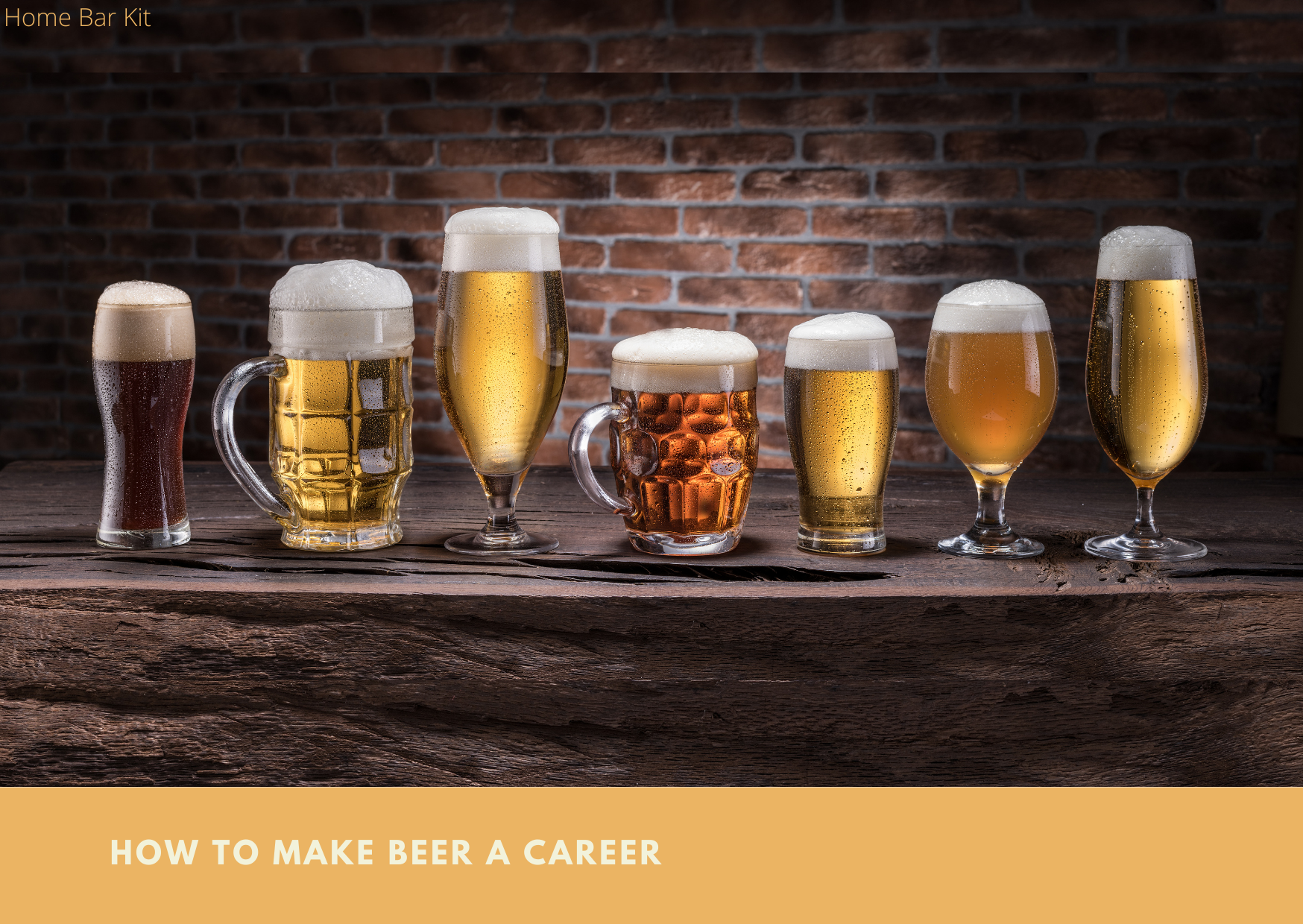 Imagine your job was about beer, it’s a beer lovers dream. Whether your talking about it, tasting it, making it or selling it, if you love beer, then yes please. How do you get a job in beer? Where do you even start? You may be surprised, so lets talk about how to make beer a career.

They say you should pursue your dream, make your passion your work, then it is not really work. I don’t know who they are, but they are definitely onto something. Doing something you love and getting paid for it has to be the best life plan. It’s easy to say, but not so easy to do, or is it?

How To Make Beer A Career

The way you can make beer your career is to decide what you want to do with beer. And don’t say you just want to drink it. Although that is a job, there is more to it. The options are to sell it, brew it, taste it, own it or write about it.

The choice is yours and one job can lead to another when you get started.

Choosing Beer As A Career

We change to something new, but find out later in life that was wrong too. Forget careers advice at school, that was just complete rubbish. It was more about telling us what we can’t do and narrowing it down to a few bad options. These were options that we were not interested in and we ended up in jobs we hated.

I do hope modern day careers advice in schools have improved, should I hold my breath? The thing is that not all of us end up doing what we wanted to do in life. Is it possible to change this? Well the answer is yes, but it takes planning.

Planning The New You

I am under the assumption that if you are here reading this, then you probably like beer. If not, then at least you like something to do with bars, drinks and entertainment. Whatever you are passionate about the principal is the same, you can make it your career.

Obviously this is about the passion for beer and all things related to it. I am going to lay out some resources that will lead to a career in beer. All it takes from you is to pick the area you want to be in and take some action.

The good news is that each path I explore is possible for anyone to achieve, it just takes action and some hard work. Also one position can lead to another depending where you start.

Selling Beer As A Career

Selling beer is one of the easiest ways to start a career in beer. I don’t mean having a store and selling beer from it, I mean becoming a bartender. Working behind a bar and pouring the perfect beer is an art, but one that can be learned.

A deep end option is to apply for a position at a local bar and learn on the job. This can be scary, but at the same time a quick way to learn. Bartending is a skill, and although beer is heavily involved, it is not all about beer. You have to know how to mix and serve a variety of drinks, from shots to cocktails.

It is not an easy job, it might look easy standing behind a bar just serving drinks, but its not. There is a lot to learn and a lot to remember. The good news is, it may be easier than you think to learn those skills.

Learn To Become A Bartender

There are many online course that teach the skills you need to have to work a bar. I know this because I research it and wrote about it. You can read the full post here Bartender Courses Online – Become A Pro. The post was aimed at becoming a home bar wizard. But they are for learning the right skills to enter the industry as a professional, so read the whole post.

These courses will teach you the skills needed and get your foot in the door. There is no real limit to a career as a bartender and you get to work with beer as well as other drinks. This position can lead to other options within the industry.

Tasting Beer As A Career

That got your attention, tasting beer as a career is a real thing, but there is more to it. In fact the job involves being a beer expert, knowing how to store beer and how to serve it. Knowing the different beer styles, the taste and flavors. Part of the job also involves beer ingredients, the brewing process and what beers go with what foods.

Basically this job is to beer what a Sommelier is to wine and it has its own title too. A Cicerone is the official title and there are four levels to get under your belt.

Each level has its own set of exams and certification and there is only one place to get these qualifications. Thankfully that is online, so you won’t have to travel the world, that will come after. I wrote a post about becoming a Cicerone which outlines all the information needed to get started as a beer expert. You can read the post here What Is A Beer Expert Called?

Although there is a lot to learn, especially to get to level 4 a Master Cicerone, it would be a great career. A very interesting career that probably could involve travelling the world.

Brewing Beer As A Career

What a cool career in beer this would be, making your own brew. Imagine creating your own recipes and making the kind of beer you like to drink. Opening a huge brewing plant may be a daunting proposition and a very expensive one too. But it can happen and it has happened, but not right off the bat.

Read some of my beer reviews under Rate My Beer. You will find out how some of those brewery owners got started. They started small and grew, the stories are great and very inspirational.

The best place to start a career in brewing is at home, invest a small amount in a starter kit and your good to go. It is that simple, try your hand at brewing with a small kit and move on from there. You never know how far it will take you.

May be you want to learn some brewing techniques to help you master homebrewing. Read my post Online Beer Brewing Classes. It is a guide to the best courses online, some of them also sell starter kits.

Homebrewing is a great hobby, and it can stay just that, unless you want to take it further. But it is the best place to start a career in brewing. Your very first batch of beer may be the acorn that grows into a huge oak.

There is another avenue that homebrewing can open up.

Brewing at home might well lead to commercial brewing which we will cover shortly. But it could lead to a career as a brewer for a brewery. With a little brewing experience or a few qualifications from the resources in the other posts highlighted in this one could get you in the door.

A Brewmaster will create recipes, select ingredients, mix and manage the whole brewing process. You have to know your stuff to become the head brewer, but its a position to aspire to. What could be a better career in beer than actually making the stuff?

I guess the top job in beer has to be a brewery owner, which can start from any of the avenues already explored. It is not an easy road though and unless you have deep pockets, not one to dive straight into. But it is one that you can progress to over a period of time.

Many brewery owners started at home with a starter kit and ended up getting the brewing bug. The brewing process became a passion. They followed that passion and turned it into a business. It didn’t happen overnight, they all travelled a journey, some longer than others.

Like any business, the journey is not always a smooth one. It is rife with bumps and obstacles designed to knock you off course. One thing they all have in common is they weathered the storms and kept going.

Although not an easy option, becoming a brewery owner is a possible one. And it could all start from your kitchen or where ever your other half allows it to start.

Read my post Learn How To Brew Good Beer, it could be a starting point to building your own brewery.

Writing A Career In Beer

It might seem a weird option to write about beer and beer related things, but it is a real option. Just like any subject, beer gets written about. If you like beer and like writing too, then it is a serious option.

Writing for magazines is a great way to have a career in beer. Obviously they need to be magazines about beer, and there are plenty. A quick search revealed a website highlighting The Top Ten Beer Magazines and Publications online.

There are many more, and these type of publications could be the perfect avenue for a career in beer. It might not be easy to get a job working for them, but it’s worth sending an article and see if they pick it up.

Alternatively contact websites that are in the beer genre and see if there are any opportunities to write for them. Experience in writing would be an advantage, but its not a deal breaker, if you can write, you can write.

Another alternative is to start your own beer niche website. It is not as hard as you may think, but it does involve hard work. It doesn’t cost much to get going, there are costs along the way, but that is the same for any business.

Choosing a career in beer is accessible to everyone, all the options I have covered are feasible. Which ever option sounds appealing can be started on a small scale. Each avenue can be started from home, can lead to bigger things and all without breaking the bank.

Some are more difficult than others, but they are all progressive. A bartender can lead to a qualified Cicerone. A home brewer can lead to a brewmaster or even a brewery owner. A website owner can lead to writer within the industry.

This is true in any industry not just this one. It is about following your passion and turning it into a career. If you are passionate about beer, then one of these options may appeal to you, its just a matter of taking action.

If you have any questions about how to make beer a career, then pop them down below. Or just share your thoughts, especially if you are already in the industry, you just might help someone thinking about it.