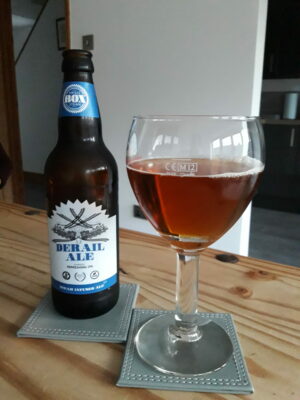 A Saturday evening is a great time to try a new beer. After enjoying a nice meal with a glass of wine, I found myself drinking Derail Ale for the first time.

I am always looking out for beers that I have not tried before, and I found this lone bottle on a shelf in the local store. It was the only one, so I had to buy it.

A Bitter start with a sweet end. This delightful beer is a bitter sweet smooth ale with a medium color, very slight nose and a satisfying after-taste. Rated a strong 4.3 – 5.

I found myself rating this beer, which reminded me of a post I wrote about this subject a while ago.

It seemed the right thing to do, and this is the result. Before I tell you whether it was a worthy beer, it would be rude not to tell you a little about the brewery it sprung from.

This craft brewery based in the small village of Holt in Trowbridge, England has been brewing for around 15 years. It has a good variety of beers and ciders, all of which I am duty-bound to try at some point.

The brewery was named after the famous railway box tunnel running between Bath and Chippenham, designed by Isambard Kingdom Brunel a pretty well-known name in engineering history. Brunel was an interesting and innovative man that pushed the boundaries.

Box Steam Brewery give me the same vibe, they take inspiration from past inventions or events and brew beer to commemorate them. I like this and it makes for some interesting beer.

The actual idea of each brew is really interesting, and that is before you even pour the beer.

This beer was inspired by a hero, the great John Chiddy who prevented a disaster on the railway near Bristol, England. A plate layer for the railway, John Chiddy whilst doing his job saved the lives of all the passengers aboard the famous “Flying Dutchman” express train.

This was back in 1876, a large rock had fallen on to the track, Chiddy seeing the approaching train made a split-second decision to try to clear the track. He was successful in getting the rock off the track, but in his endeavor got struck by the train and lost his life.

John Chiddy prevented the derailing of the train and prevented a disaster where many would have probably lost their lives. A true hero that deserves a beer to be brewed from the inspiration of this mans great courage.

Hence the birth of Derail Ale in honor of John Chiddy, this traditional style IPA is brewed using Chinock, Cascade and Admiral hops.

I always look forward to trying a new beer, whether it is an ale, lager or cider. It’s the anticipation of trying something you love and how it will differ to other drinks in its class. Derail Ale for me was not a let down, in fact I loved it, a bitter starting point with a slightly sweet end, weighing in at a decent 5.2 % vol.

There are those that seemed to have got a lot out of this beer, with many flavors being detected. Such flavors as toffee, plumb, lime, sour fruits, nutty, caramel, orange, earthy, spicy and even a grassy have been shared. That is a lot going on, but we all have our taste differences, so its understandable.

It is a medium amber color and when poured gives a little head, which soon disappears. The nose is subtle and it is hard to pick up any distinctive notes, although that could just be my nose. Some have detected floral, earthy and caramel aromas, but I think the nose is light.

For me the taste is bitter but in a light way, there is nothing heavy about this ale. Within that lovely bitterness is that nice malty palate which then leaves a sweet caramel after-taste.

There are no fireworks with this beer, but it is a good solid go to ale that will not disappoint. Rate my beer gives it a comfortable 4.3 out of 5.

Derail Ale is not the only ale from this family run brewery, and it won’t be the only one I try either. I love their angle on the inspiration of history to create a beer around.

Here are some of the beers available from Box Steam, all of which I will be trying at some point in the future.

Here we have a fruity pale ale inspired by Brunels Royal Albert Bridge, which is said to have a golden bolt under its layers of paint. This weighs in at a light 3.8% vol and has light peach notes making it a soft citrus session ale.

Inspired by Brunels ship the ‘Great Eastern’ which had 5 black funnels lined up in a row, this vanilla porter was born. It has the sweetness of vanilla and the bitterness of chocolate, weighing in at 4.5%vol, its a must try beer.

This eerie beer is inspired by a ghost story, the sightings of a woman in a ragged nightdress appearing in the east exit of the box tunnel. It has a 4.8% vol and is described as a ruby beer which is dark, smoky and malty balancing bitter and sweet perfectly.

These are just 3 from their growing range of beers, I for one am looking forward to trying them and the rest of their beers. I will write about each one as I try them.

I loved Derail Ale and I did raise my glass in honor to the brave John Chiddy. On the label of Derail Ale is a request to raise your glass to the forgotten hero John Chiddy, so it would have been rude not to.

I think this beer is a gem if I am honest, but it will be interesting to try all of the Box Steam range and see how they stack up against it.

This may be a beer you have already tried, if so then share your thoughts on how you found it and whether you liked it or not. I enjoyed drinking Derail Ale and have to say that it is worthwhile trying, when you do come back a let me know what you thought of it.