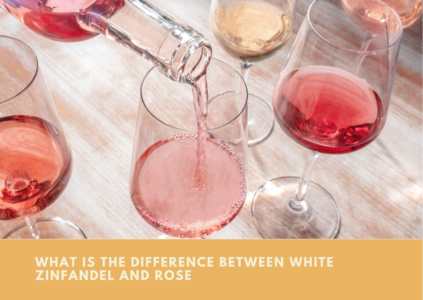 Have you ever wondered why a pink wine that looks like a Rose wine is called White Zinfandel. Why call a pink wine white when it is obviously not a white wine, it is all a bit confusing. I had to get to the bottom of this cheeky wine loved by many and frowned on by others, so what’s the story.

The story of White Zinfandel is an interesting one and actually came about by way of a fermenting accident back in the early 1970s, whilst actually producing a red wine. So, a red wine, ends up pink and they call it white, help.

If it’s not a white wine, then is it a Rose wine?

The quick answer is yes, it is a Rose wine. It may be called white and there is a reason for that, which I will explain further on, but it is a sweet Rose wine.

So, what is the difference between White Zinfandel and Rose? Nothing.

A short answer indeed, but like I said it is an interesting story and one worth knowing if you don’t already.

Zinfandel is a rich black skinned grape that is well-known and well grown in many parts of California. It grows well in California because of the beautiful warm climate. The grape is sweet and has a high sugar content which produces strong full flavored red wine that tends to have a high alcohol content.

The Zinfandel grape is said to have made its way to America during the 19th Century having come from Europe. It is the same as the Croatian grape Crljenak Kastelanski as well as the Italian Primitivo grape.

The grape produces enticing red berry flavors with anise and pepper notes, giving it a beautiful fruity flavor ending with a touch of spice.

Here we have a grape that produces a great red wine loved by many, yet can produce a rose wine which they call white.

What Is White Zinfandel

White Zinfandel is a light pink wine that is produced from a red wine grape through a special process in the making of the wine. Surely the person that came up with that idea must be a genius.

The person that did come up with it may well be a genius, but he did not set out to invent the White Zinfandel. It happened as a result of trying to make a Zinfandel even better than it already was and not wanting to waste any produce.

How White Zinfandel Was Born

How do you make a popular rose wine called White Zinfandel from a rich black skinned grape used to produce red wine?

The accident happened when Bob Trinchero of the Stutter Home Estate was looking to make an already full-bodied Zinfandel even more robust. The wine in question was the Amador County Zinfandel. He experimented by skimming off a good amount of the juice, changing the juice to skin ratio in an attempt to make it bolder.

The liquid that was drawn off had been with the grape skins for only a short time and had a light pink appearance. Rather than waste this produce, Bob came up with a great idea, bottle it and sell it as a Rose wine. To make it more appealing, instead of calling it a Rose, he named it a White Zinfandel.

The name White Zinfandel then, was just a clever marketing ploy to make it more appealing to the consumer.

The first batch of this wine was obviously a result of skimming off juice from a wine that was in production, and it wasn’t going to win any awards. It was a dry Rose that although sold fairly well, didn’t really set the world on fire.

That is until the accident happened.

While making a batch of the White Zinfandel a few years later, something unforeseen happened. There was a problem with the fermentation process, something known as stuck fermentation. This is where the yeast dies off before it has finished turning the sugar to alcohol. This produced a sweet wine that had a low alcohol content and the wine took on a new lease of life.

Is White Zinfandel A Rose Wine

It is different to a lot of the more popular dryer and crisper Rose wines, and is not always seen as a serious wine. It is sweet, lighter in the alcohol department and because of the way it is made can be produced fairly cheaply.

I have heard it said that if you know anything about wine, then you would not drink White Zinfandel. My wife would argue with that as it is her favorite wine.

I will also say that this wine has come on leaps and bounds in recent years and there are many wine makers producing some great White Zinfandel wines.

It may have come about by accident and whether you hate it or love it, White Zinfandel is a popular wine. It has developed over the years with many wine makers creating their own versions and fine-tuning it to perfection.

I decided to write about this wine because it is my wifes favorite wine and I have heard people say to her ‘why is it called White, when it is clearly pink’. It is a question that neither myself nor my wife could answer, so I had to find out.

Another question I hear people ask is, ‘what is the difference between White Zinfandel and Rose’? Although I didn’t think there was a difference, I thought I better make sure, just in case.

White Zinfandel was a clever discovery, come about by an experiment on a red wine, and a problem with the fermentation process. A Rose loved by many was born, and the man behind it decided to confuse the world by calling it white, genius.

What’s your call on the sweet pink wine that splits opinions, do you love it or hate it? Pour yourself a glass and share your thoughts below.