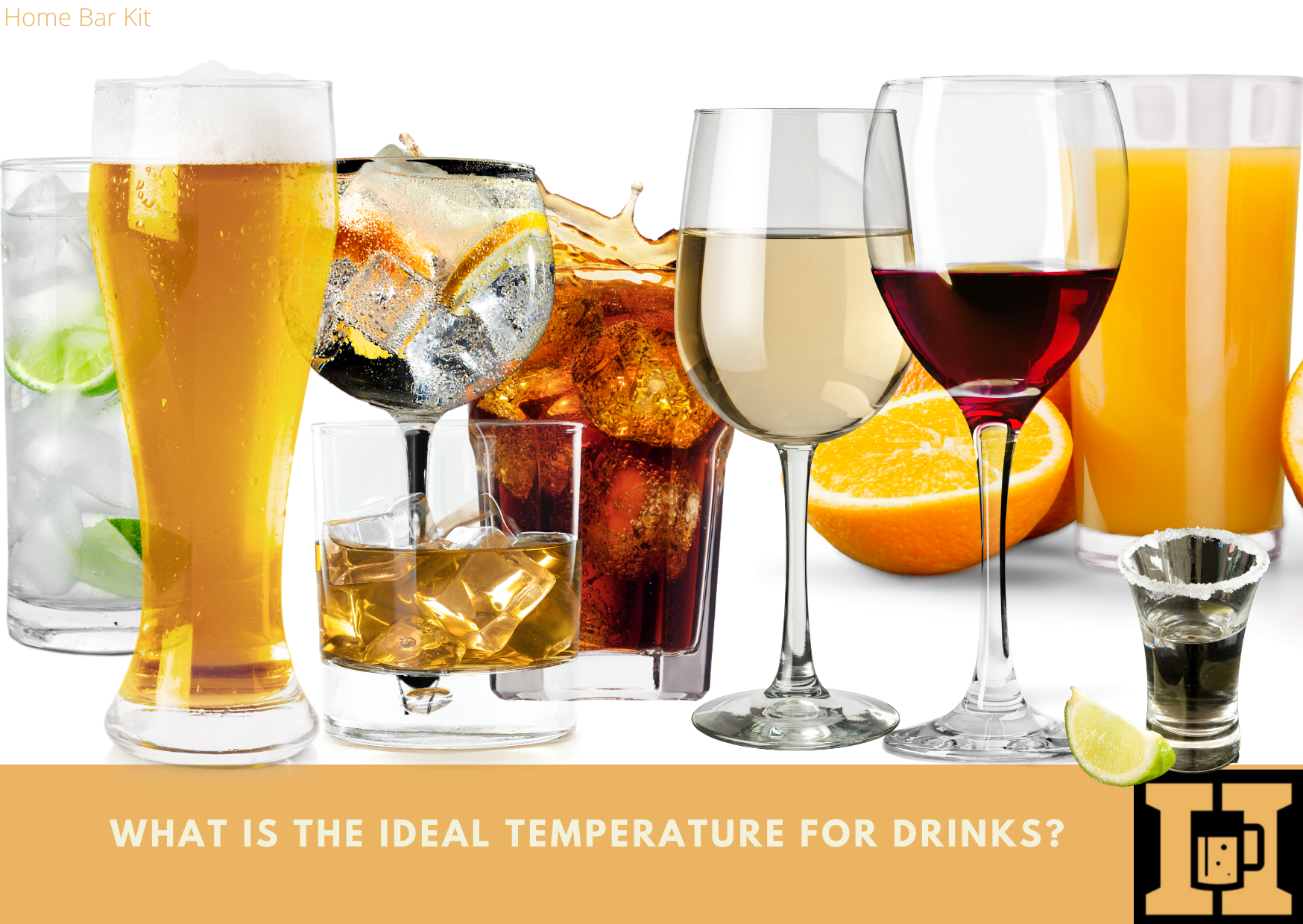 It may not seem that important, I mean if I want a cold soda, then I will store it in the refrigerator. I like my wine chilled, so I will put it in the refrigerator. The same goes for beer, just pop it in that big white box and all will be well. However by using this philosophy we may not be getting the most out of our favorite beverages. So what is the ideal temperature for drinks?

How we store our drinks may have a bearing on how we enjoy our drinks. Different drinks are their best at the right temperatures. Having said that, there is no need to get obsessed with this to the point we are measuring every drink with a thermometer before we serve it. All drinks have a little leeway in regard to their serving temperature.

What Is The Ideal Temperature For Drinks?

A good bartender will know the right temperatures for each drink they serve. Why not be a good home bartender and do the same thing, your guests will love you for it.

What Are The Perfect Temperatures To Serve Drinks?

Luckily the perfect temperatures for different beverages have a small range window. This means we don’t have to get our white wine to an exact degree of Fahrenheit or Celsius. We do have a few degrees leeway for each drink.

I will keep it brief with beer because as I said I have visited this subject before. But I will still provide the right temperatures for the right type of beer.

A simple chart I put together explains each type of beer and their own temperature window.

See it is not too strict, there is a little elbow room to move on. Remember also that it is just a guide, there is no rule that says you have to serve your beer at the perfect temperature. All it means is that each range suits each type of beer.

CAMRA give a similar temperature range.

We get the most out of the beers characters, the aromas and flavors are at their best when served at the right temperature. Nevertheless if you like your real ale served at 35°F (1.6°C), then crack on, it is your choice.

Do your own tests, pour a glass of real ale at the coldest temperature, and one at the recommended temperature. Then see how different the experience is, you might find you prefer it mid range.

So that’s beer, how about wine?

Just like beer, wine is best served at the right temperature. This will depend on the type of wine we are serving. Some wines like to be cold, others prefer slightly warmer temperatures. Again this is based on the wines characteristics. The right temperature can allow aromas to flow and flavors to blossom. On the other hand, the wrong temperature can mask these and leave our wine a little lack lustre.

Again this is only a guide and your personal preference is what really counts. However just like beer, you can test these temperatures yourself and see what fits best for you.

A light bodied white wine is as low as sparkling wine, but can afford to go slightly warmer too. Remember though, it is your choice.

When we get into a deeper more full bodied white wine, we can go a little warmer to accentuate the wines deeper aromas and flavors. The range falls between 50°F – 55°F (10°C – 12.7°C), with a Chablis on the lower end. A Chardonnay would be slightly warmer with the more refined Montrachet at the higher end of 55°F (12.7°C).

Does a few degrees make all the difference? Probably, but it is not worth getting to hung up about it. Unless of course you want to carry a thermometer in your pocket.

Now we get on to the red wine varieties. And the lighter bodied red wines although go slightly warmer the full bodied white wine are best served cooler than full bodied reds. The scale for light bodied reds is 55°F – 60°F (12.7°C – 15.5°C). A Beaujolais for instance would best be served at the lower end of 55°F (12.7°C).

Whereas a Barbera or Grenache would be served a few degrees warmer at the higher end of the scale. Just getting into the scale would suffice in my opinion, but that’s just me.

On to the heavy gang, those full rich deep reds that prefer a little more warmth to be enjoyed at their best. The scale rides from 60°F – 65°F (15.5°C – 18.3°C), with a Malbec sitting at the lower end. A Cabernet Sauvignon or Syrah push up the higher end of the scale. As does a Ruby Port which may also fall into this scale too.

Just like the beer temperatures, this is just a general guide. Everyone has their own idea of the perfect serving temperatures of wines. How about Liquors?

Liquors are generally seen as being served around room temperature, with the exception of gin and vodka. These can be cooled, with some storing them in the freezer for an ice cold drink. I think that liquor more than beer and wine falls to more of a personal choice.

The thing to always remember is that you are in control of the temperature of your drink. Liquor can be drunk several different ways. In a cocktail or with a mixer, on the rocks or just neat. This will determine a larger variety in the serving temperature.

For that reason the serving temperatures mentioned are a loose guide to the serving of spirits.

I also prefer it neat rather then with a mixer, I guess it really is a personal thing.

As with gin, vodka is a personal thing, whether you drink it ice cold, over ice, with a mixer or neat. However it is seen as being best served colder than gin at 44.6°F (7°C). It is a common thing for people to store their bottles of vodka in the freezer, so I guess cold is better when it comes to vodka.

Personally I am not a fan, but I don’t mind it in a cocktail or two.

Unlike gin and vodka, rum moves up a little on the temperature scale and tends to be seen as served around the room temperature. Darker spirits that are aged will gather more flavor compounds and are best served warmer to appreciate these. Even white rum can be aged in wooden casks and will develop flavors accordingly.

This gives the brandy drinker more leeway on what temperature it is best served at. A bottle kept at room temperature will probably fall within this scale.

Whiskey falls into a similar scale to brandy with the lower level the same and the higher level slightly lower. The scale looks like 59°F – 65°F (15°C – 18.3°C). However some like ice with their whiskey, or even a drop of water, which can open the drink up a little.

For me whiskey is better at the higher end of the mentioned scale, it just feels a richer drink.

Tequila falls between gin and vodka on the scale at 49°F – 55°F (9.4°C – 12.7°C). Seeing as tequila is mostly drunk as a shot, it is hard to detect whether it has been served too cold or too warm. You can’t detect its temperature in a cocktail either.

But if you pour and sip a tequila there is more to it when it falls within the scale mentioned.

As with any drink, it really is a personal choice as to the temperature you serve it at. This goes for our favorite liquors too, but it is handy to have a little guide.

What about soft drinks.

Personally a soft drink is best served cold, straight out the refrigerator works for all soft drinks. Having said that, there is a slight variation between Pepsi and Coca Cola. The former is said to be best served at 38°F (3.3°C), which is pretty cold. The latter is best at a slightly warmer 42°F ( 5.5°C), who knew? Other soda’s would be best served around a similar temperature, or between the two.

Juices seem to be favored between 46°F – 50°F ( 7.7°C – 10°C), this is the best temperature for drinking your favorite juice. Again just like sodas straight out of the fridge will do.

It certainly seems like a bit of a complex subject, but remember this is only a guide. Many of the drinks mentioned do fall into similar temperature scales. The lowest being the light and macro beers, and the highest being whiskey and brandy.

My favorite drinks are beer and white wine, so I take note of getting these within their respective scales. Or at least as close as I can, a light lager will come straight out of the refrigerator and in a glass. A real ale or porter will sit for a while to warm up a little before I serve it. The taste is more in depth when it is in its proper serving temperature scale.

If I fancy a spirit, which I prefer to drink neat and without ice. I will take them at room temperature, that is the way I like them. They are more than likely somewhere near their temperature scale, but it is not something I check.

In the end it is up to you personally, those drinks you favor and enjoy the most deserve a little more care. Get these ones within their temperature scales and enjoy.