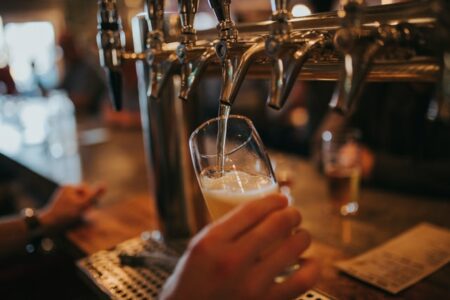 Those of us that love beer (and there are a few of us) generally think that beer served from a tap is better than beer from a bottle or can. It always hits top spot, with bottled beer coming in at second spot over the poor can which always comes in last for our beer preference.

Is there a real reason why beer on tap is better? Or is it just a load of baloney?

Personally, I do prefer beer from a tap, but I am not sure whether it is because the beer actually is better or because somewhere up there among my few brain cells I have been led to believe it is better. I had to find out and understand why most of us think that tap is better.

Why Beer On Tap Is Better?

There are several reasons why we prefer beer on tap as opposed to bottle or canned beer, and then there is also a reason why we prefer bottle to can too. Freshness plays a big part in the tap coming out on top, a keg does not hang around in storage like bottles and cans. Then we have the aroma, light, and of course temperature, all of which are controlled in the draft systems found in our favorite bars.

If you think of a typical bar, there will be a large volume of people drinking the same beer, so a keg will not last long and will be changed regularly for a fresh one. This means the beer is not sitting in storage and gets consumed while it is still relatively fresh.

That being said, I guess there maybe some bars that are not that busy and their kegs may have beer sitting in them for longer than they should, but that is an exception to the rule.

The Scent Of Beer

It is known that we have a taste/smell connection, a high percentage of what we taste comes from what we actually smell. A beer from the tap is always poured into a glass, and more often than not a glass that is designed for the beer we are being served.

This allows the aroma of the beer to waft up our noses, giving us a sense of taste before we even taste the beer. You will not get this from a bottle or a can, unless of course you pour the contents into an appropriate glass.

The aroma of the beer then could be the main reason why draft always comes out on top when we compare to a bottle or a can. This is the same as wine or a brandy, when we taste them we are working off the aroma first before any of the liquid passes our lips.

Next time you open a bottle or a can of beer, keep this in mind and pour the beer into a glass and see if it makes a difference to the overall tasting experience.

The Enemies Of Beer

There are a few things that can affect beer and how it tastes, which is our main objective.

Light can change beer, it reacts with the hops and the beer can become more bitter than it is supposed to be, this is known as skunked, being compared to the spray of a skunk.

The beer in a keg will not be exposed to light, nor for that matter will the beer in a can, but bottled beer can be affected by exposure to light. This is why a lot of beer bottles are dark brown or green in color.

Time can be a factor in the taste of beer. As I have already mentioned the keg in a bar will almost always be fresher than the bottles or cans that can be sat on shelves for weeks or even months. This can have a bearing on the taste of the beer.

Although we normally would chill our bottles or cans of beer in a fridge, a draft system keeps the beer at the optimal temperature, which is 38 degrees Fahrenheit (3 degrees Celsius) and serves it under pressure which gives it the perfect texture.

The beer we normally get in bottles and cans will have gone through a pasteurization process which destroys the bacteria and any yeast left from growing. This is done by way of a heat treatment. Some say that pasteurizing beer will destroy some of the beers characteristics and flavor.

It means that the beer will keep for longer, which is why most mass-produced beer in bottles and cans go through this process. Keg beers are not pasteurized which means they may be richer and more flavorsome, but will need to be consumed quicker as they won’t keep as long.

Our own perception can have a bearing on why we may think beer tastes better from a tap. We may perceive it to be better from a tap just because that is what other people have always said, we are influenced by the majority.

The surroundings in a bar or pub will also influence the drinking experience. A bar creates a certain ambiance that affects our senses, and just the fact that your beer is poured and served to you by a bartender has a bearing too.

Although I may enjoy a beer at home, it is not the same experience as enjoying a freshly poured beer in a bar with some friends.

It’s In The Can

Although the can is often seen as the worse form of enjoying a beer, it has come a long way since the days of tainting the beer. The biggest complaint is that the tin can taint the flavor of the beer, giving it a metallic taste.

Can technology has moved on though and various coatings are used inside cans to stop any tainting of the contents.

There are a few other advantages of the humble can too. The beer in a can cannot be affected by light, and it is also airtight meaning oxygen will not spoil the beer.

You may have noticed that there seems to be a lot more beers being packaged in cans in recent years, especially craft beers.

So the can maybe the winner after all.

I think there is a lot to be said of a beer served fresh from the tap, it seems to be most peoples favorite way to enjoy a beer. I also think that the reasons I have pointed out all have a bearing on why we think beer is best from a tap.

We cannot discard the bottle or can though because if we treat them right then they will serve us well. Storing them properly and pouring them into the right glass will take us close to our preferred draft beer.

Just as the tap, bottle or can are all different, so are we and will have different opinions about how we enjoy our beer. Share you thoughts on why beer on tap is better, or not.