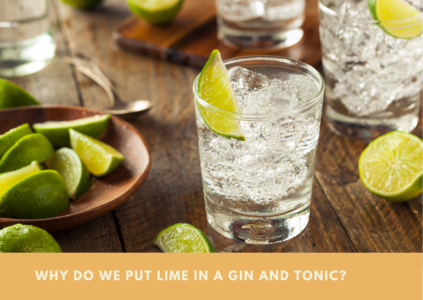 The classic gin and tonic is a beautiful thing, with its bright zesty juniper base and the bittersweet tones of the tonic water. Add in some ice and a slice of lime and you have a well-balanced refreshing drink that will please the palate every time.

A gin is not a gin without the juniper, but we also find that the other most common botanicals found in gin are coriander seed, the root of the angelica plant and the peel of lemon and/or orange. If we already have lemon and/or orange as a base to gin, why do we put lime in a gin and tonic?

Why Do We Put Lime In A Gin And Tonic?

Lime in a gin and tonic will add citrus and lift the whole drink up, giving it that fresh bright taste.

The History Of Gin And Tonic

The history behind the gin and tonic not only explains how this great drink was born, but also how lime got involved in the first place. This historic and world-famous drink was first introduced to the army of the East India Company as a prevention to malaria.

As quinine was the traditional cure to malaria, it came about that it could act as a prevention to the disease and was taken in tonic water which contains quinine. The British soldiers were not keen on this bitter tasting drink and decided to add a few ingredients to lighten it up and make it more pleasant to drink.

Soldiers in India at this time actually had a gin ration (that is cool). They took to adding the gin to the tonic water, along with sugar, water and lime to make it a nicer drink. The gin and tonic was born, and along with it the garnish of lime.

Eventually after much study, it was recognized that the amount of quinine in tonic water would not prevent malaria, or treat it for that matter. This did not stop the drink that the soldiers accidentally invented to die, in fact it became a very popular drink.

Somehow lemon came into the picture and was added to a gin and tonic as an alternative to lime. This opened up a debate for which is best, lemon or lime?

The popularity over recent years of this great drink has seen gin as well as tonic explode in its development with many flavors and botanicals being added to enhance it.

We have already seen from the history of gin and tonic that the traditional garnish to add is lime. Somewhere along the line, lemon was used, and some say it is the right fruit for the job, or even that lemon was used before lime. I think it is fair to say that lime was first, but it is not a debate that I want to get into, or for that fact which is best.

I have had my gin and tonic with lemon, and I have had it with lime. my preference is lime, not because it was first, but because for me it is a more mellow flavor to add to the drink. I find lemon just a little harsh, and I think lime just fits better with the make up of gin and tonic.

This is just my preference and the reason why I don’t think there should be a debate between these two amazing fruits which add a sour citrus burst to the drink. Add the one you prefer, or go for something else completely, believe me there are many options to choose from and they all bring something new to the table.

Gin And Tonic Has Moved On

The gin and tonic has moved on with its new flavors and flair, some say it has grown up, but I say it was already fully developed and it just has many flamboyant siblings.

Gin has gone through an epic journey in recent years with the introduction to so many flavors from raspberry to salted caramel (really). When the gin revolution hit and new flavors were hitting the shelves, I did try a few of them, strawberry, elder flower and blackberry got some attention.

They were pleasant and something a little different, but they didn’t live up to the standard and sophisticated classic traditional G&T.

Buy one of these new flavored gins in a bar and you not only end up with a flavored gin, but a flavored tonic too, with an array of garnishes which amount to more than your five a day.

Yes, tonics experienced their own revolution and the likes of Fever Tree headed the way to more flavors from the little bottled mixer. There was so many garnishes to choose from that bar condiment caddies were springing up behind the bar to house them all.

Here are just a few of the gin flavors available, this is just the tip of the iceberg, there are so many now.

Believe me the list goes on and on and on.

Just like gins, the tonic water flavors have gone crazy, and here are some to contemplate.

Fancy any of them in your gin?

Whilst lime and lemon have been the traditional garnish for a gin and tonic, the gins and the tonics have found a new lease of life, and it doesn’t seem to be an end to it. Garnishes have got their foot in the door too, you will see pretty much anything being added to your new-look G&T.

Here are a few to add to the constantly evolving gin and tonic.

The list just goes on and on, it literally is anything goes, think of any fruit, vegetable, spice or herb and just give it a go. I think there is a place for other garnishes other than lime or lemon, but reign it in a bit please.

I think cucumber or mint work well, even a few strawberries dancing in your gin and tonic on a summer’s day does work, I just wonder what else is going to make its way in a G&T.

On top of all this, there are now even special gin glasses, from the straight highball to the large bowl with a sturdy stem, yep, even glasses are developing to the gin craze.

Gin has long been an ingredient for many cocktails, and that is a great thing, but the gin and tonic explosion of late has seen it morph into its own standalone cocktail style drink.

It seems that the humble gin and tonic has moved on and become an ever-increasing array of flavors. That does not mean we have to go with it, I have nothing against the G&T revolution with all its colors and flavors, but the original is still the best.

Th traditional gin and tonic with a slice of lime wins every time for me. Even though the gin itself contains many botanicals already it does make you wonder why we do put lime in a gin and tonic. Simply because it adds a citrus lift to that makes bright and fresh.

The gin and tonic is a great drink, how do you take yours? Are you in favor of the traditional mix, or do you prefer the all new gin and tonic extravaganza, share your thoughts below.