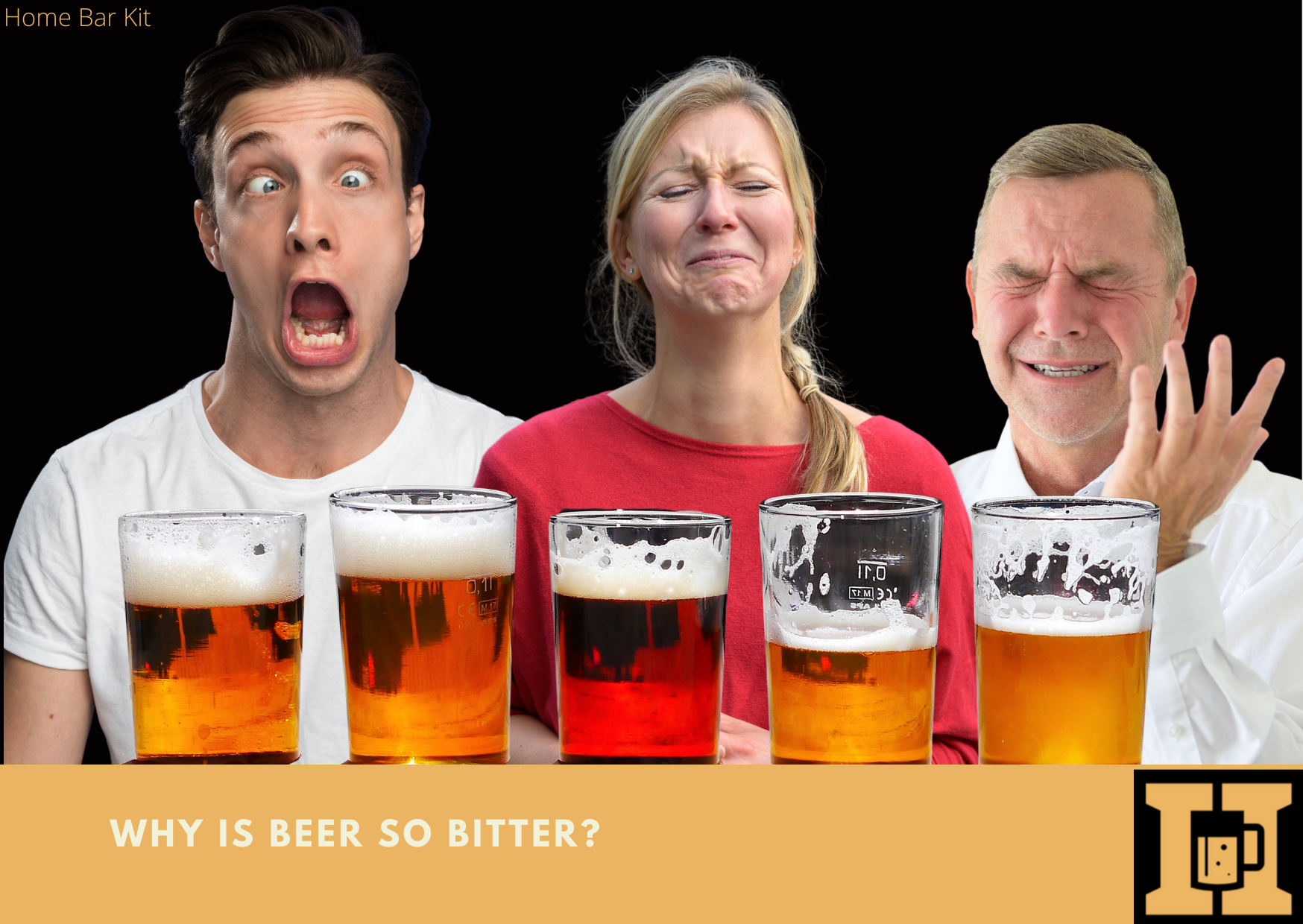 I have heard so many people say “Why Is Beer So Bitter?

A lot of people just don’t like beer because it is too bitter for them. On the other hand there are many beer lovers who lap up all that bitterness.

In this article I will explore the why’s and wherefores of the bitterness in beer.

Why Is Beer So Bitter?

Well it is all about the hops. Generally hops are what give a beer that bitterness that some people just don’t like. The sad thing is that this can put those people off of beer. However not all beer is bitter, and hops although can really add a bitter edge, don’t always have to. They can be used for aroma and flavor without the bitterness. The bitterness is up to the brewer.

A brewery will brew beer to the demand of its customers, that may be bitter or not.

Like I said it is all about the hops, which are the flowers or cones from the plant Humulus Lupulus. Now that’s a fun name, but is the reason behind most of the bitterness in beer. I say most because other ingredients can be used to add a bitter element to beer too.

Anyway back to the hops for now, because they are the main bitterness offender in beer. However they don’t have to be. Obviously there are many hop varieties now, which can bring slight variations of aroma and flavor to the table.

When it comes to bitterness, the hops are the main ingredient used to achieve this, but it depends on the brewing process as to how much bitterness is added, or not.

So its about the amount of hops, what hops are being used and when they are added to the brewing process.

Craft breweries are getting ever more inventive with the way they use hops in the brewing process. On top of that many new hop varieties are always surfacing. So those that find beer too bitter, may just want to visit some of the new craft beers hitting the market. You may be surprised.

Hops Are Not Just For Bitterness

Hops are not used in beer just to attain a bitter taste. Besides they don’t have to make beer bitter. So why else are they part of a beers ingredients?

Hops also serve other purposes in the brewing of beer. They act like a preservative, keeping the beer fresher for longer. This is how the English preserved their beer on long trips on ships a long time ago, chuck in more hops.

It is also said that hops can help with foam stability, the head and decorative lacing that forms around the glass as you drink.

However probably the biggest job of the hop these days is for aroma and flavor. The variety of hops available today can provide brewers with an array of beautiful aromas and flavors. Think citrus and tropical fruit, grassy and pine or pepper and spice.

Hops bring a lot to the table in brewing and are an important ingredient in today’s craft beers.

What Else Can Make Beer Bitter?

But it is not all about bitterness as we know from the original question “Why Is Beer So Bitter?”

Why Do People Drink Beer If It Is So Bitter?

I am not sure whether I am right on this but I would say that our taste profiles are different. What I mean is that everyone has a unique taste profile, some maybe similar, but surely they are like fingerprints.

If this is the case then we all perceive things in a different way. One person may say it is really bitter, whereas another might only get a slight bitterness. It is the same with hot spicy food, some are less tolerant than others.

Plus, we all like different kinds of tastes, I happen to like savoury, spicy and bitter things. Whereas M’Lady prefers sweet milder flavors. So we are all different, a bitter beer may put one person off, while another (like me) will lap it up.

We can also learn to like something that we initially hated. A perfect example is sugar in our tea or coffee. Add sugar for the first time and it will taste way to sweet. But continue to drink it with sugar and over time it will become normal.

Now give up sugar in tea or coffee and it will taste way too bitter. But again over time it will become normal. We get use to taste and even come to like them, and end up wanting more of the same.

This goes for beer too.

Don’t Right Beer Off Because Of Bitterness

If you have tried beer and never touched it again because it was too bitter, don’t right it off completely.

The good news is that not all beers are bitter, especially in today’s brewing industry. Take some of the crazy beers that these mad breweries are producing, and I mean mad in a good way.

Some are far removed from the bitterness that has been associated with beer in the past. Fresh, fruity, tropical and sweet are hot on the scene. There are some you would not even know was a beer.

So the next time you refuse a beer because it is to bitter for you, think again.

Try some new craft beers and you may just fall in love with beer.

Something that is interesting to know, that is if you didn’t know already. It’s IBU (International Bitterness Unit) which tells you how bitter a beer is.

The IBU number is sometimes displayed on a can of beer, which is handy because it will roughly tell you how bitter that beer is.

The IBU scale runs from 0 – 120, so if the beer in question has an IBU of 10, then it is not going to be that bitter. Obviously an IBU of 90 is going to be a pretty bitter beer. Beyond 120 and you would not taste any more bitterness.

This is only any good if the IBU is displayed on the packaging, but it is a handy thing to know if you are not keen on bitter beers.

So there are plenty of beers out there that are bitter, some are made that way on purpose. Some of us like that bitter edge.

However I hope if you turn away from beer because of this, you now realise that not all beer is equal, in the bitterness scale anyway.

Maybe it is time take another look at beer, and checkout some of the numerous sweet, fruity and tropical beers on offer. Or perhaps some of the more indulgent rich porters with their chocolate and caramel notes.

I know you are tempted, you have suddenly got the urge to try beer again. You may find one you like from the many I have rated recently. Or just browse the many on the shelves of the store.

If you go for it and find out you suddenly like beer, share your thoughts below about the experience and what beer it was. Drink safely and have fun.