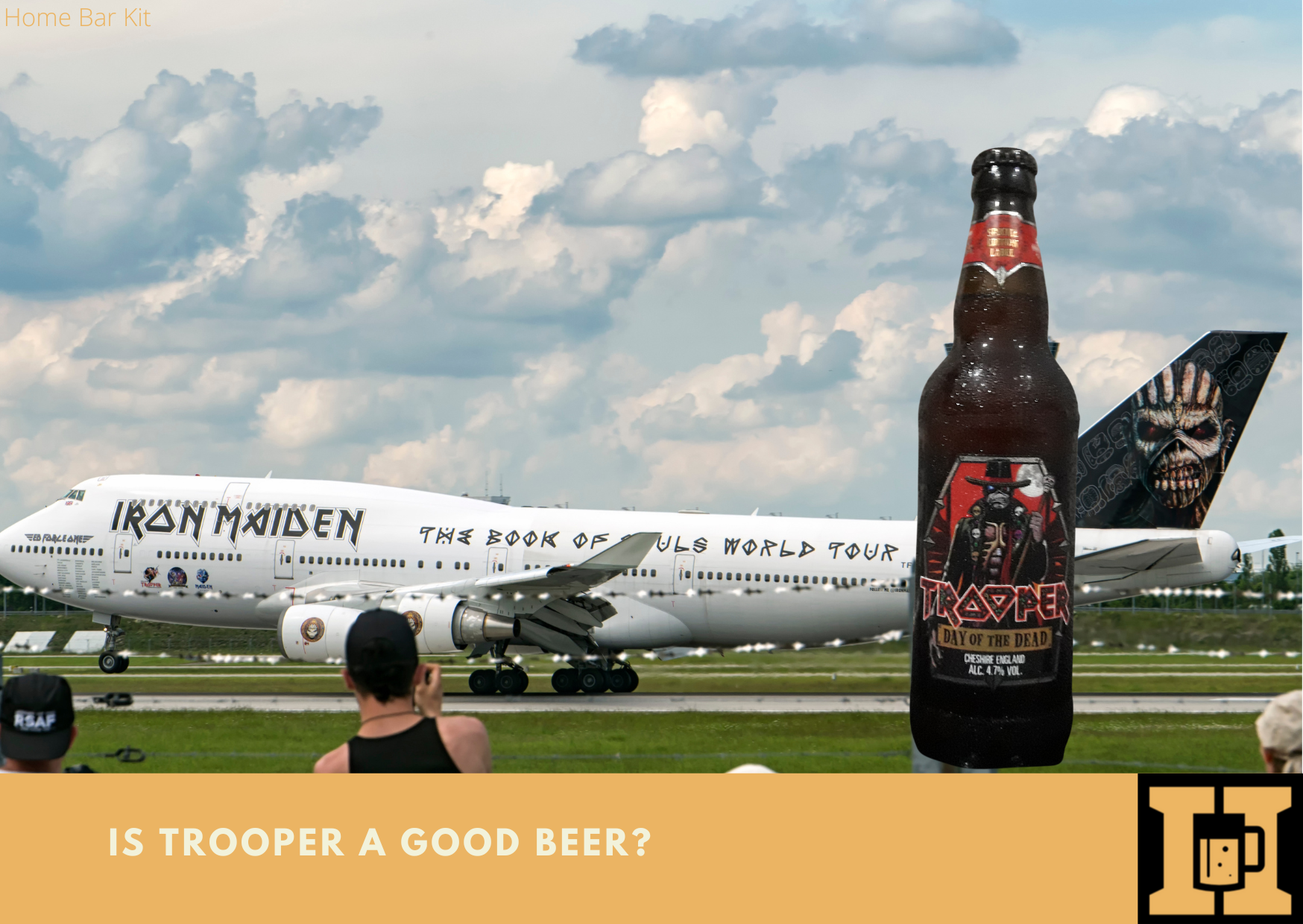 This beer has been around a long time now, but some how it keeps passing me by. When I see it, I just think gimmick, so I thought I better give it a go. This one is the special edition label ‘Day Of The Dead’, so is Trooper a good beer?

So now that I have finally decided to try the Trooper, my expectations are high. An explosive band like Iron Maiden have surely produced and explosive beer. Will I kick myself for all those wasted years, or will I run for the hills?

Is Trooper A Good Beer?

My high expectations crashed and burned. That is not to say it is a bad beer, in fact it is a decent beer. However there is no oomph, nothing that makes it stand out, apart from the label of course. The nose is as light as a feather with malt being the overriding aroma. Taste is light too, being pretty much all malt with flavours of toffee caramel. There is a tiny detection of citrus hop maybe lemon or grapefruit. Basically it is a malty bitter with the slightest of citrus hops. The rate my beer score is 3.7 – 5.0.

For me it is a standard malty British bitter that doesn’t have much hop bitterness.

What happens when an old brewery and an old rock band come together?

Beer, that is what happens, and it happened in 2013 when Robinsons approached the band to create an Iron Maiden beer.

Bruce Dickinson the bands singer is a fan of real ale and of course jumped at the chance to brew a beer.

Trooper Ale was born, a premium British style malty ale with hoppy citrus lemon hints. Named after the bands famous song The Trooper and sporting the famous mascot Eddie on the label.

A collaboration between a hugely successful band formed in the mid 70’s and a brewery founded in 1838 is bound to be a winner. And that it is, with over 30 million pints sold worldwide.

So successful in fact that the range of Iron Maiden beers has grown considerably with there site presently showing 13 beers.

Is Trooper A Good Beer?

This Trooper is the special edition label, Day Of The Dead which has been released for the past few years between October and November.

This is during the Mexican holiday of the same name, where Mexicans welcome back the souls of their deceased relatives.

Trooper is a popular Iron Maiden song inspired by The Charge Of The Light Brigade a disastrous British attack on Russian troops during the battle of Balaklava.

The label which is typical Iron Maiden sets this beer up to be something special.

But does it deliver?

It pours a mid gold with a decent two finger white top. This does fade to half that, but then sticks around leaving a nice lacing around the glass.

The nose is very subtle and consists mainly of malty aromas. If you take it in long enough there is a tiny hint of citrus hop.

The taste kicks in with malt running the show, flavours of toffee and caramel on a bready base. Again there is a detection of a hoppy citrus grapefruit or lemon, but it is easy to miss.

A slight bitterness hits the tongue to calm down the sweet malt flavours.

For me it is a standard British bitter, that is all about the malt, but not much bitterness. That is okay with me and I do like it, I just thought it would be a bigger hitter on flavour.

Both Lou and I agree that its an okay beer, easy to drink and pleasant. At 4.7% Vol it falls well within the session range, so more than one is allowed.

The rate my beer score of 3.7 – 5.0 reflects the beer, its good but nothing special.

Lou disagreed slightly and said “I think its better than that” and scored it a higher 4.1 – 5.0.

I am sure it is the beer that Iron Maiden and Robinsons set out to brew. That’s fine, I just expected a little more oomph.

As I have mentioned the Iron Maiden range of beers is quite comprehensive now. All bear the great Iron Maiden style labelling, and range from a 5.0% Swedish lager to a 6.0% porter.

They all look like making my hitlist, which will keep me busy. I have a few to feature here, starting with Hallowed.

Hallowed is a dark beer inspired by Belgium, it uses Belgium yeast and Noble hops. The taste is banana hints with a plum finish.

At 6.0% Vol it packs a punch with a smooth dry finish. I’ve got a sneaky suspicion that the Iron Maiden song Hallowed Be Thy Name could be the inspiration behind this beer.

Fear Of The Dark

Said to be a full bodied English stout rich in flavours like roasted chocolate. It has a malty toffee and dark cocoa with only the slightest of bitterness.

Reports feel it is more of a light to medium bodied stout. Again another beer from another song, Fear Of The Dark.

Looks like Iron Maiden have gone off on a tangent and teamed up with another brewery (I wonder if Robinsons know). This Hellcat IPA is a hoppy little number that is brewed by Brewdog.

It hops forward with an enthusiastic citrus, while a powerful malty base stands its ground. At 6.0% Vol its got guts and has a combination of three hops. One being the potent Citra for a hoppyness experience.

Sounds like a bit of a Hellcat to me.

Iron Maiden then are well established in the beer world, a nice little side line to the music. Whilst I wasn’t madly impressed with Trooper (I think I expected too much maybe), it’s an okay beer.

However that is all it is, but I have high hopes for some others in the range. Especially Hellcat, because we know Brewdog aren’t afraid of producing a hopped up beer.

I look forward to making my way through the Iron Maiden beers. If you have tried this range of beers, then do share your thoughts below.

What do you think of this Iconic heavy metal band and their range of beers?