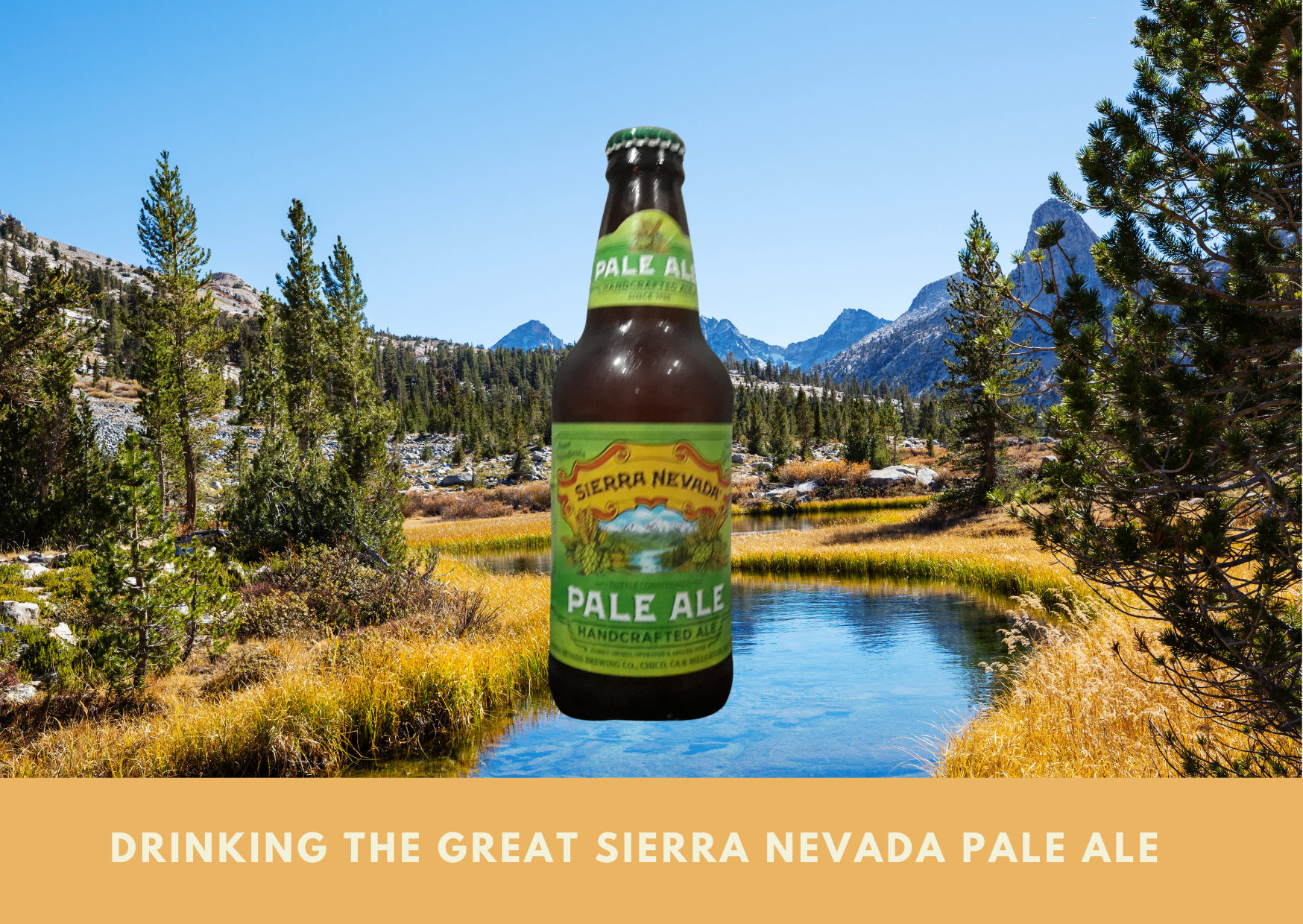 It is the weekends when I try out a new beer, and when I say new beer, that is not always the case. I may have had some of them before, but sometimes you have to revisit to refresh the memory. Looking at what I had on offer, I found myself drinking the great Sierra Nevada pale ale.

It has been around for decades and it is a classic pale ale. I have had this beer before, but it was a long time ago, so it was time to begin the refresh. How good is this mature pale ale?

It pours a delightful mid amber with a decent white cap. The nose is hoppy, entangled with a citrus grapefruit hint and a malty caramel sweetness. The exciting first sup brings a hoppy but smooth taste that is criss-crossed with a zingy citrus hit. Then comes a slightly sweet caramel sitting on a malty carriage that turns on a bitter note. It’s a good solid pale ale that weighs in at a decent 4.5 – 5.0 rating.

Where did it all start for this grown up pale ale?

It all started with a teenager that had a passion for brewing. His name was Ken Grossman and he would move on from his brewing hobby to create a brewing empire. After prohibition and when home brewing was legalised the young Ken decided to start a brewery.

The Sierra Nevada brewing co. was born, founded with his friend Paul Camusi. With his love of hiking and climbing in the mountain range, the name Sierra Navada came easy. The brewery was literally built from scratch using old dairy equipment. The first batches of beer brewed were a stout, but in 1980 along came a pale ale.

The Sierra Nevada pale ale was born, using the newly developed cascade hop which later revolutionized the craft beer market. This classic pale ale has never looked back and has been a favorite across America ever since. It’s pretty popular throughout the world too.

In 1987 the new brewery is set up in Chico, California, which is still headquarters today. Fast forward to 2015 and another large brewing facility is set up on the east coast in Mills River, North Carolina. This new location is led by Kens son Brian.

A humble beginning, the young Ken built Sierra Nevada brewery into one of the largest American breweries, impressive.

This bottle conditioned beer impresses from the start, it sits on the shelf among other craft beers tall and proud. The new kids on the block with their funky new designs (not a bad thing, I love some of the modern designs), shout and scream at you to take them home.

Sierra Nevada Pale Ale and its forty plus years of experience just looks you in the eye and says ‘you know you want me’. The classic design holds a classic pale ale that has stood the test of time, it has earned its stripes.

Chilled from the cooler, it is time to remove the bottle top and expose the beer. The pour reveals a golden amber beer. As it settles it produces a substantial foamy white lid that sticks around for the duration, just leaving a steady lacing.

Going in for a sniff test and you get the floating hop scent that is accompanied by a citrus hit. Grapefruit and pine are the citrus tones with a slight sweet caramel hint. It looks good, it smells good and the taste does not disappoint either.

A smooth hoppy entrance weaved with a tangy citrus festival creating a satisfying carbonation on the tongue. The background carries a sweet caramel maltiness that turns slightly bitter and lingers for a pleasant aftertaste.

A classic pale ale that has been around for so long and held on to its status does inspire me to check out more. What else has Sierra Nevada brewery got up its sleeve?

The use of a torpedo system, which is a dry hopping system makes for a bolder beer. It allows for more aroma and flavor, but without producing more bitterness.

Torpedo extra IPA is the result of this brewing process and delivers a potent beer that is both aggressive but balanced. It promises citrus and pine with a herbal coat, but its about those hops, this is one for the hop heads.

At a fearless 7.2% vol, it is not for the faint hearted and needs to be handle with respect. A definite one to try, I shall be keeping an eye out for this bad boy.

This fine porter from Sierra Nevada is inspired by the old London style porters of years gone by. It is brewed though, in a hop forward American style with Yakima Golding and Aurora hops. The malts include, black, caramelized, chocolate and Carafa.

These all contribute to a dark beer laced with a rich roasted caramel flavor with a hoppy but smooth feel. At a reasonable 5.6% vol it promises to be a full flavored porter worthy of a try.

In search of a fantastic IPA the brewery went all out and produced one. With a selection of five hops, it sounds like they have gone hopping mad. Amarillo, Chinook, Idaho 7, Azacca and Strata make up the hop combination, you just know it’s going bite.

Add to this mix loads of malt, oats and wheat and you may just get what you are looking for. They were looking to create a ripe, juicy and as the name suggests a hazy beer. It is described by others as a hazy golden orange, that ticks the haze box. Flavors such as pineapple, mango, tangerines and citrus are mentioned, with a gentle carbonation and a smooth finish.

It weighs in at a whopping 9% vol, so tread carefully or it won’t just be the beer that is hazy. It could be a fruity extravaganza but will it be fantastic? I will let you know when I know.

It seems that the Sierra Nevada brewery are an inventive bunch when you look through the range of beers they brew. There are certainly a few I want to take for a test drive in the future.

As for the pale ale, it is not an adventurous beast like the fantastic haze, but it does deliver the goods. The hops and citrus are well balanced, with a sweet caramel leading to a slightly bitter end. It’s a good solid pale ale with great flavor and character.

Seeing this beer has been around for a long time, chances are you have taken it for a spin. Share your thoughts on how it measured up in your mind.