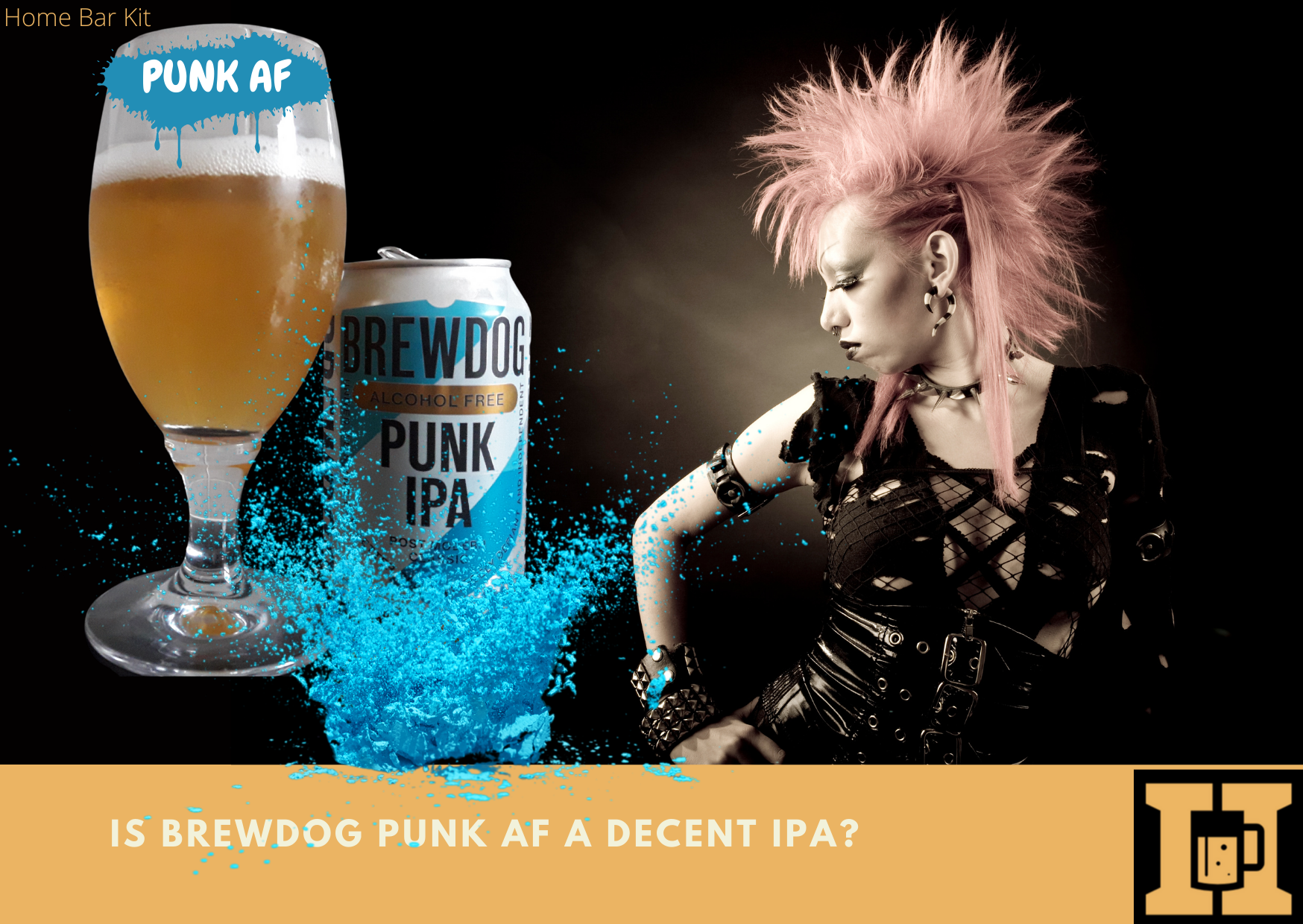 I love Brewdog Punk IPA, it is one of my favorite craft beers, but what about Brewdog Punk AF? When you take something out of a beer can it really be the same? So when I heard they had created an alcohol free version my reaction was not a positive one. Having said that, I thought I would give it a go, but was it worth it? Is Punk AF a decent IPA?

I am not a fan of alcohol free beer, not because I am against the concept, in fact it is a great idea. My problem is they don’t even come close to the real thing, so I avoid them. But have Brewdog done the impossible?

I can’t believe it, you may not believe it, but yes, they have done the impossible. Brewdog Punk AF is a decent IPA. It’s an alcohol free beer that tastes like a real beer, praise the beer gods. It looks like Punk, it’s got the nose of punk and yes the taste resembles punk very closely. It pours a golden amber with a moderate top. The nose is a zippy citrus aroma of grapefruit and lemon. The taste is a hoppy citrus front with a malty background. Rate My Beer score of 4.5 – 5.0.

Brewdog The Punks Of Beer

Whenever I rate a beer I always talk a little about the brewery, just to give some insight on where they are coming from and their ethos within the industry. I have rated several Brewdog beers, so have written a fair bit about the brewery.

It is fair to say that Brewdog are an inspiration, I am even going to say that they are to the beer world, what the Sex Pistols were to the music world. Edgy in your face, with an honest message that rings true with those that will listen.

The Sex Pistols were not the first punk band, but they were the ones that connected on a level that other bands could not. Brewdog were by no means the first craft beer brewery, but they shout loud and get noticed.

They care about the the planet and they care about beer too. So it is no surprise that they have produced an alcohol free beer worthy of calling a beer. How they have done it, I don’t know, but they have and its great.

For me they inspire other breweries to thrive beyond limits and push the boundaries of craft beer. Love them or hate them, they are punk.

As a beer lover, when those rare times hit and I am in a pub but cannot enjoy a real beer, I freeze. I don’t want pop, I want beer. So you ask the question “What AF beers have you got”. The answer is normally the same, one or two macro AF beers. “Okay then I will have one of them” with a turned down smile on your face.

However things are changing thanks to the likes of breweries like Brewdog. They have crafted up the alcohol free beer world with substance. No more watery tasteless and pointless so called beer. We now have AF beer with purpose that tastes like beer.

I say yes, My’Lady says yes, and Joe my son says yes, but just adds that it is not quite as carbonated as the real punk. Fair point, but it is so close, how many AF replicas taste any where near like the real thing?

Not many until now, because it is not just Brewdog hitting hard with AF beer, but may other craft breweries too. And I didn’t ever think I would say this, but I am looking forward to trying them all, stop it.

On to the beer then, is it really a good IPA?

Well it pours a golden amber, maybe slightly lighter than the real punk. A white foamy head sits on top and although fades a little stays intact. This leaves a suitable lacing close to the real thing.

On the nose it has all the same characteristics, subtle with a zippy hoppy tropical citrus vibe arising from the glass. Aromas of grapefruit and lemon tease the nose drawing you in for a taste.

The first sip reveals a hoppy citrus front that lends to grapefruit and even pineapple. It’s got a similar punch and that slight bitter edge. This all makes way for a base of rich maltiness that is smooth and leaves you with that feeling of beer.

It develops to the richest AF beer I have tasted to date, okay that is not many, but watch this space.

I have to say it tastes like a real IPA, it’s a beer without the alcohol. At 0.5% Vol I can officially say it is safe for a session, so fill your boots.

A deserved rate my beer score of 4.5 – 5.0 is a testament to how well this beer stands up against the real thing.

Brewdog are not the only craft brewery to embrace the alcohol free beer trend. There are many others, which I will be looking into, not at the same rate as their full fat friends, but I will be looking.

It is good to have a great alternative at last to the real thing. And Brewdog have five of their favorite beers they have brewed as alcohol free beers. So I am turning the spot light on them as my other featured beers from this brewery.

I love a bit if Elvis Juice, a tropical extravaganza in a glass, punchy, lively and strong. So can Elvis AF stand up to the real thing. I hope so and will be giving it at try soon.

It promises the same attitude as Elvis, a lively citrus full of grapefruit bite that dances on the tongue. Orange and pine include in the hoppy line up set against a malt base. Can Elvis AF join Punk AF as a triumph in the zero beer trend? I hope so.

Oh my word, I love Hazy Jane, I think I described it as an army of tropical fruit dancing on a blanket of malt with a strong hoppy head, or something like that.

So then, can Hazy AF even begin to come close to Jane the goddess of hazy NEIPA’s?

I am a little nervous on this one, especially as I have bigged up the AF in this article. But hey, although nervous, there is a quite confidence vibrating beneath the surface.

It promises the juiciest AF beer in town, so I’m hopeful. The same tropical citrus fruits with that slight grassy aroma, with a tongue bouncing taste that leaves you wanting more. Which is not a problem with an AF beer.

It is time for a craft AF Lager, can it knock the macros out of the park? To be fair that is not a difficult task, especially going on the Punk AF.

So have Brewdog captured the same experience with the AF version? Well it promises to be the same pilsner style malt base with zingy citrus hops singing from the side lines. I need to give it a go, how about you?

This is a Brewdog beer I haven’t tried yet, mainly because it is an AF beer. Pull your finger out Rob and stop mucking about, I know.

I have avoided it just because of the 0.5% Vol, however now I have tried Punk AF, I will have to give it a go.

So what are we in for?

Well it is a bitter, described as robust and malty, sounds alright so far. There is no less than six north American hops and amber malts, Wowza. It’s a balance of malt and hops with a strong bitter bite. I will air my thoughts once I get around to trying the Nanny State.

I first gave into the AF market when My’Lady said I had to give it a chance and rate them too. Although I said I would, secretly I was putting it off. However by accident I ended up with a Zero Tropical IPA from Drop Bear, and I was impressed, you can read about it here.

It turned my head, and although they could never replace the real thing for me, they have a place. Last weekend I was in London visiting my parents and I was the driver. Punk AF came to the rescue and I went all in, it turned out a comfort when I new I couldn’t have a beer.

If you love beer as I do and find yourself in that situation when you can’t drink the real thing. Then give one of the new craft AF beers a shot, I think you may be surprised, I am.

Of course once you do take the plunge, even if you are kicking and screaming. Be sure to share your thoughts below on your AF experience.

2 thoughts on “Is Brewdog Punk AF A Decent IPA”