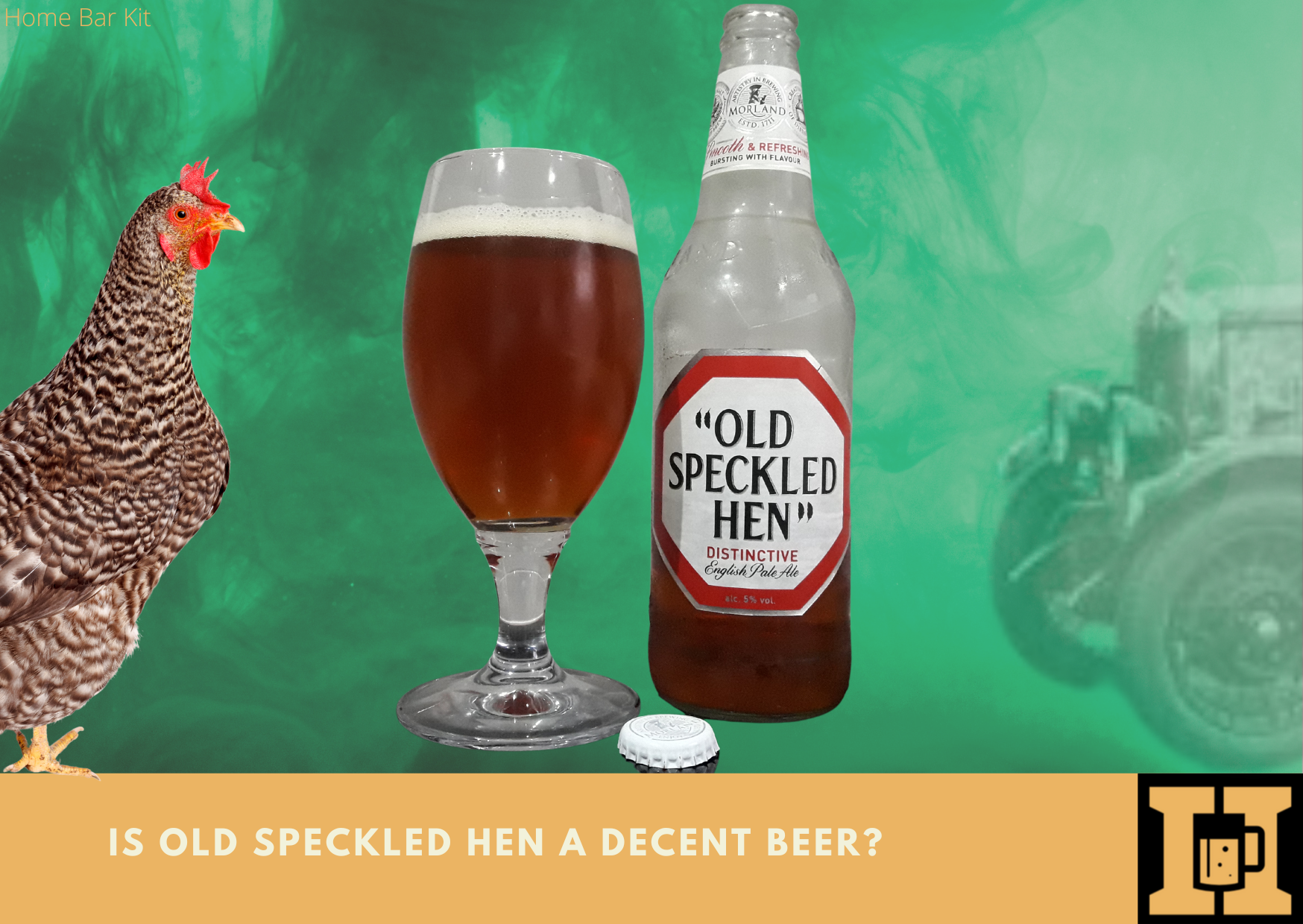 This beer has been around for years and I have enjoyed a pint or two on many occasions. Sometimes though it is nice to revisit some old favourites to see if they still stand up today. So is Old Speckled Hen A Decent beer?

When this beer was first produced it would have been a crowd favourite, a proper English ale. However things have moved on considerably in the beer world. So can the old timer compete with the new kids on the block?

It is a decent beer, there are no bells and whistles, but it has its own true character that I like. Once poured it settles a mid brown with a thin head. The nose is malty with sweet toffee caramel notes and slightest hint of fruit. The taste is a similar experience with a hit of malt laced with sweet toffee caramel. A mild carbonation makes it a little jumpy in the mouth. It ends with a mild bitterness that lingers nicely. Old Speckled Hen has still got it and gets a rate my beer score of 4.2 – 5.0.

I am quite surprised how much I still like the old hen. It takes you back to the days before the hop explosion.

Morland Brewery was founded in 1711 by John Morland a farmer in Oxfordshire, England. He brewed ales and porter for pubs in and around London.

The brewery saw success and after John’s day expanded in acquiring first Abbey Brewery and second Eagle Brewery. This led to Morland moving its operation to Abingdon, also in Oxfordshire.

For reasons I’m am not sure of the brewery decided in 1944 to go back to the old name of Morland.

Fast forward to 1979 and the motor company MG who also worked out of Abingdon asked Morland a favour. Which was to brew them a beer to celebrate their 50 years of production.

Old Speckled Hen was brewed and named after the MG Featherlight model which sported a silver and black speckled coachwork.

MG was closed the following year, but lives on in Old Speckled Hen.

In 2000 Morland was bought by Greene King who not only still produce Old Speckled Hen, but have added to the range.

Old Speckled Hen use to be labelled as a Strong Fine Ale. However now it is labelled as a Distinctive English Pale Ale. I am sure I remember a beer clip some years ago that said English Fine Ale.

I suggest the pale ale has been added to bring this beer up to date, which if true is not needed.

Like I said, I have had this many times over the years. However this is what I got from it today.

The beer is obvious through the clear glass bottle, so you know what you are getting in terms of look.

A mid brown clear beer with the slightest hint of amber. Once poured into the glass it is exactly the same with a thin white top. This does fade to nothing and little lacing decorates the glass.

On the nose it is subtle but distinctly malty with a sweet toffee aroma. This is backed up by a tiny fruitiness.

You get the same with the taste, just in a stronger way. A full blast of rich malt hits the mouth with a sweet toffee caramel smoothness. There could be a little fruit hanging around back there, but this goes before it gets established with a nice bitter hit.

It is well balanced and the mouthfeel has just a little jumpy fizz. But the end is a lingering mild bitter beauty.

I like it, but it comes across these days as nothing special. However I think it is a bit special, its dependable, like a leather seat in an old MG.

At 5.0% Vol its on the edge of session, an old English rich malty ale to be enjoyed to the bitter end.

Overall I would say that Old Speckled Hen has stood the test of time.

Obviously the Morland Brewery is now closed with the take over from Greene King. At least OSH survived and we can still enjoy it today.

Seeing as Morland Brewery is no longer I thought I would feature a few of the Speckled Hen range. These are now brewed by Greene King Brewery.

The Old Hen goes light with this refreshing golden ale. Apparently pretty aromatic on the nose with tropical fruits of mango and grapefruit.

You still get a good hit of sweet malt, just finished with a clean citrus hit that produces a decent level of bitterness. At a 4.1% Vol if its good then it may warrant a second just to make sure.

Old Crafty Hen is a hybrid of two beers. One being Old Speckled Hen and the other being the very strong (12% Vol) 5X from Greene King.

A rich deep ale that has plenty of malt flavour with dried fruit and toffee sweetness. It is strong at 6.5% Vol and is described as vintage oaked ale.

Release the hops for this Old Hoppy Hen a promising bitter ale with tropical grapefruit aroma and flavor.

Four pairing hops give this pale ale its tropical layout and at 4.2% Vol it sounds a crisp refreshing beer.

I may just hop on board and get me some Old Hoppy Hen.

Although the Morland Brewery has gone, at least a legacy stays behind in the form of an Old Speckled Hen. Which is good news because it would be a shame if this beer faded away into the beer yard in the sky.

For me it is an old classic that manages to keep afloat in a deep sea of new age craft beer. It won’t blow your socks of with whacky citrus flavours, but it is a dependable beer.

What about you, are you an avid fan of the Old Speckled Hen? Or would you prefer it to disappeared with the brewery. Either way, share your thoughts below.

2 thoughts on “Is Old Speckled Hen A Decent Beer”