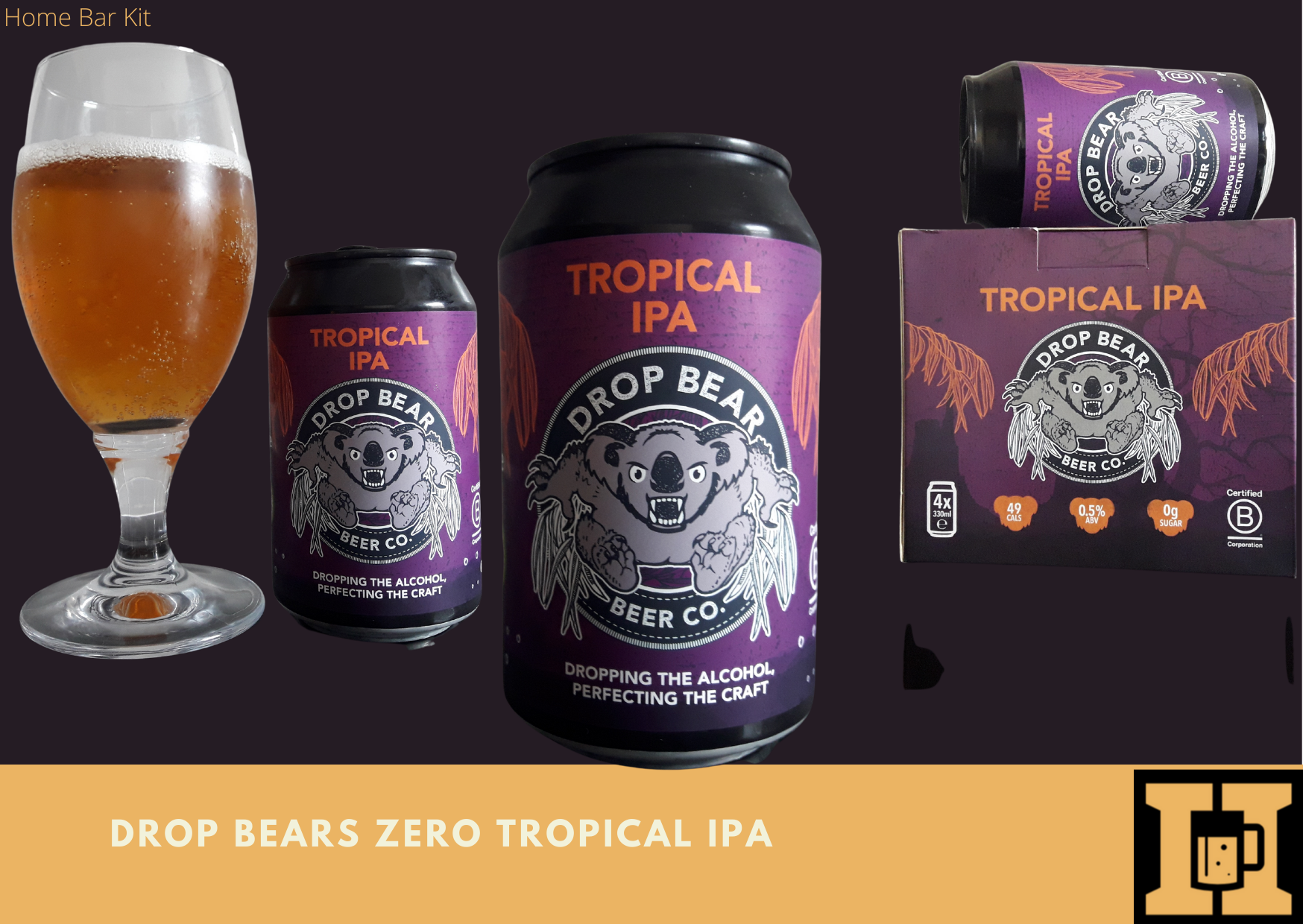 What has an angry Koala and an alcohol free beer got in common? It’s an Australian/Welsh mash up that will become clearer as you read on. But maybe the bigger question is, why am I drinking Drop Bears Zero Tropical IPA? Because I dropped a clanger, again I shall explain myself further on, but for now lets just accept it has happened.

There is quite a beautiful story behind this craft beer company. However there is no alcohol involved, this is craft beer without the alcohol. Most breweries are jumping on the alcohol free trend and have at least one within their beer range. But Drop Bear Beer Company are a little different because they are all about AF beer.

Surprisingly it is not bad, a craft beer with all the IPA characteristics. It pours well, settling to a mid golden brown with a thin top that all but disappears. Modest aromas of burnt coffee predicting a bitter palate with a hint of tropical fruit in the background. The prediction runs true with a medium grainy carbonation that is popping bitter hits around the mouth. There are modern IPA tropical fruits promising to explode on the tongue. However the bitterness keeps them in check like an espresso shot again and again. A punchy little number for an AF beer that hits a rate my beer score of 4.2 – 5.0.

It may just be the zero beer that has turned my head and got my attention.

The Drop Bear Beer Company was founded by Joelle Drummond and Sarah McNena in 2019 in the heart of Wales. They are a couple that have taken the alcohol free craft beer market by storm, and in a short space of time too.

It all started in 2018 when Sarah who loves craft beers gave up alcohol. After being a little underwhelmed with what was on offer in the AF market, Sarah put an idea to Joelle. The idea was to brew their own AF beers, which Joelle did not get on board with. Well not straight away anyway, but eventually she did and Drop Bear Beer was born.

Where did that name come from? Sarah is Australian and a Drop Bear is a prank the Aussies like to play on tourists. They tell visitors to watch out for the angry Koala’s that like to drop on people from the trees. Apparently Joelle fell for the prank when the two met in Australia.

The two set about brewing AF beer from their kitchen and I believe their first attempt was a stout, which now graces their range. The launch of their beer company was with two beers, Yuzu Pale Ale and the Tropical IPA.

Fast forward to 2022 and they are a brewery with a strong foundation that promises to go from strength to strength. They have also added two more brews to their range, one a lager and one a stout. Go the Drop Bear.

We have to take our hat off to Sarah and Joelle, not only are they the only alcohol free beer company in Wales, but also one that is run by women. Although that is only at the time of writing, there are bound to be more in the future. Lets just say they are the pioneers.

I am not one to go for this AF beer malarkey, it is just not on my radar. When I started the Rate My Beer section of this website, M’Lady said ‘what about alcohol free beer’ and my reply was ‘what about it’. I would like to apologise now, sorry to Lou and sorry to the AF industry.

I typically pick a beer to rate in one of two ways. Firstly, I seek a beer out that I know of and want to try. Secondly, I pick one at random off of the shelf at the store, this normally means I pick one that stands out. When I do it this way, the packaging comes into play, those that stand out go into the cart.

Congratulations Sarah and Joelle because your can design and packaging hit the brief, it stood out. However something that has never happened before, happened that day. I only picked up a beer that was alcohol free, and without knowing it too.

The fault lies not only with me, but the store too. Me for not reading the packaging, and the store for putting it amongst the general beer population. There is a section of shelving in the store that is stocked with alcohol free beer, a section only M’Lady visits, it is not a section I frequent.

So my flippant attitude to alcohol free beer has been corrected by fate, much to the amusement of Lou. I could have disregarded my purchase, but I didn’t, I embraced it (well I wouldn’t say embraced, more accepted it).

The reason I have not rated a zero beer is because to me they are bland. I have tried many over the years, you know, when I have been the designated driver. Every time I have had one, I have been disappointed, the lack of flavor and body just doesn’t float my boat.

However like most things of old, time changes them and new and inventive people come along and improve the norm. I am not saying that Sarah and Joelle are the first to change that norm. But by fate and the angry bear on the can, they got my attention.

Consequently I will be spurred on to try the rest of the Drop Bear range, as well as other breweries AF offerings. But before I do, lets talk about this Tropical IPA for the angry Koala.

So it was the packaging and fate that sneaked this cheeky little AF beer into my cart. In fact it has to be said that the design is great and the logo brilliant. Sarah and Joelle worked with a company local to them Waters Creative to get it just right, and I think they did.

The beer itself flows out of the can thrashing the sides of the glass like any good beer. It settles to a mid gold body carrying a thin cover on top. This does fade fast and leaves the slightest of foam bubbles balancing on the golden body below.

The nose has those tropical fruits present, although it is hard to identify one apart from another. But the strong aroma of roasted coffee to the point of being burnt scream bitterness.

The taste flows from the aroma with bubbles of bitterness bursting in the mouth. Again the tropical citrus flavor is there, but all to subtle and gets crowded by a strong bitter base. Lou got espresso, and I get it, but maybe just a little too much. Hence it overpowers the hoppy citrus undercurrent trying to play its part.

This is not for the lack of malts and hops with Pale Ale, Munich, Cara, Dry Crystal, Flaked Oats and Wheat malt making up the malt bill. Therefore we have the promise of full a full body slight grainy feel with plums and dried fruits. The hops fly in with Citra, Ekuanot, El Derado and Simcoe constructing the hop bill. Giving us plenty of earthy fruitiness with tropical citrus and stone fruits.

It’s a hefty blend that you would not expect for an alcohol free beer, but Drop Bear are not mucking about. They are serious about producing the best AF beer on the market.

It is a punchy little number for a zero beer, something I did not expect. It has the hoppy tropical flavor you would expect from today’s IPA’s. However these are a little overshadowed by the strong bitter base to this beer.

As my experience with the new AF beers is limited, I can only rate this one on what is in front of me. I like it and it is impressive for an AF beer, but, for me anyway, it needs a little more development. I like a beer to be bitter, but if this was reined in a little, giving the hops and citrus a chance to shine more. If that were to happen, look out you alcoholic IPA’s.

It’s a high scorer at 4.2 – 5.0, which reflex in its full body and powerful punch. Good job and a shout out to the angry bear.

As a very young brewery, you wouldn’t expect a vast range of beers from Drop Bear. But they have produced a tidy little range in a short space of time. The range extends to four beers, a craft lager, a pale ale, the tropical IPA we are looking at today, and a stout.

All are obviously AF beers and they have hit this from all angles, providing a style for everyone. I am sure the range will extend over time, in fact I am certain it will. They are an exciting brewery who have their purpose set in stone.

This is an India Pale Lager with a headstrong body promising some sweet honey with roasted malts and a lemon and lime hit. With hops including Wai -iti from New Zealand we can expect lush fragrant notes with a citrus fruit twist.

Is this going to be a fresh crisp lager with a full body like its IPA sibling? I look forward to trying it, did I just say that? Anyway, if lagers your game and you want to try an AF version, give it a go.

One of the two originals from Drop Bear along with the Tropical IPA. This pale ale named after the Yuzu fruit, a cross between a lemon, grapefruit and mandarin orange could blow the citrus head off. With a toffee base and those powerful citrus fruits on board, I kind of can’t wait to taste it. I don’t know what’s happening to me.

Just like all the Drop Bear beers this is Vegan as well as Gluten Free, something I forgot to mention earlier. Dive into this fruit strong AF pale ale.

Time to go to the darker side with the Drop Bear AF Bonfire Stout. A heavy mixed malt bill puts together a blend of smoky caramel malt flavors laced with a chocolate coffee undertone. The hop element relies on a solo Chinook, which could promise a spicy touch to finish.

It takes inspiration from the classic Irish stout and the German Rauchbier. It shouts out loud to the AF beer world to take note, because it intends to dominate. If you are not too intimidated then grab one and find out the truth.

Thanks to two lovely ladies we have a Welsh brewery intent on bringing the world the next generation of AF beers worthy of thought. I secretly wish they would sway off their path and make a full fat version beer. But I can’t see that happening, it would mess up their AF brand. Still we can live in hope I guess.

As for what they have produced thus far, its award winning in you face AF mastery, or have I gone over the top. Whatever it is, it will be remembered by me and of course M’Lady (smirking), the beer that turned my AF attitude.

Check the Drop Bear Beers out, could they grab another beer lovers attention. Share your thoughts below and don’t leave me standing alone in an alcohol free daze.