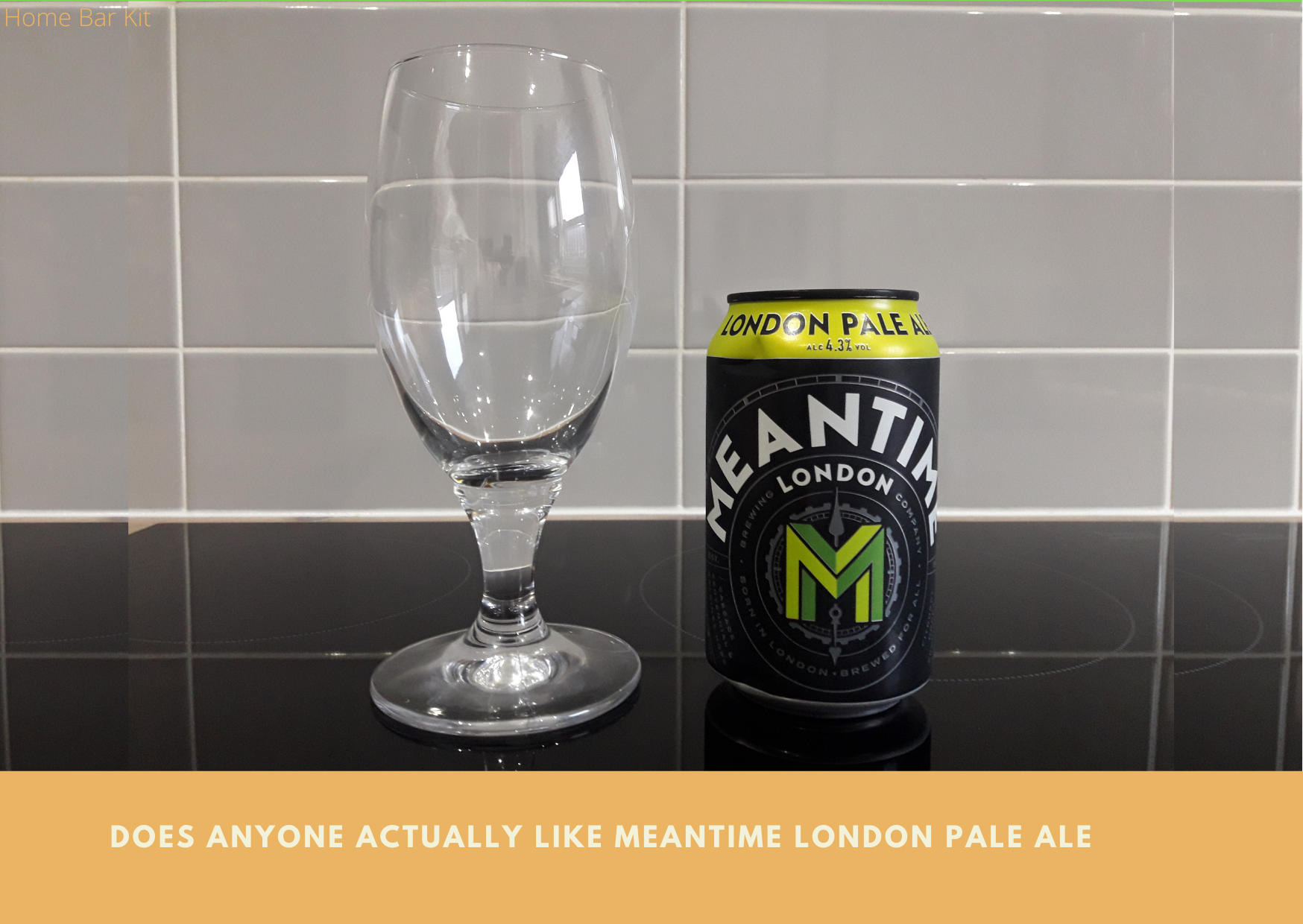 Of course they do, why? Because it is a decent pale ale, it won’t set your taste buds on fire, but it’s a decent beer. The reason I ask ‘does anyone actually like Meantime London pale ale?’ Is because I saw that question on a beer forum online.

Intrigued, I investigated to see what the answers were, I thought the beer was about to be slated. However although the owner of the question did have a somewhat negative opinion of the London pale ale. Most were complimentary of it, and there were a fair few answers. Although I have had this beer before, it had been a while. Obviously I had to pick up another one, share my opinion and give my answer to the question.

It is not an astounding yes, the views are a bit of a mixed bag. Nevertheless, it pours a deep amber with a generous frothy head. On the nose, it has a definite citrus front line with a floral backdrop. Hints of grapefruit buzz between the two. Taking a swig and a modest citrus hit is wrapped in a bitter undertone, that mellows out. Leaving an almost creamy honey like bitter sweetness. Its all there, but just a bit vague. 3.9 – 5.0 Rating

It tries its best, but lacks a bit of oomph, and I am sure it used to have that oomph.

Founded in 1999 By Alastair Hook from a lock up in Greenwich, London. It wasn’t long before he moved into larger premises just around the corner. Meantime brewery was born, aptly named because of the obvious location. Close to the Shepherds Gate Clock which displays Greenwich Mean Time.

Alastair learned his craft from Herriot-Watt University in Edinburgh, achieving a degree in brewing. Later he studied at the Brewing school in Weihenstephan, Germany. It seems he was always going to brew beer and these foundations proved the like.

Fast forward to 2015 and May saw the sale of Meantime to SABMiller, the second largest brewer in the world. Two months later Alastair was named brewer of the year by All Party Parliamentary Beer Group. Just 17 months later in October 2016 Anheuser-Busch InBev acquired SABMiller. InBev then sold Meantime along with Peroni and Grolsh to Japanese giant Asahi Group Holdings. Asahi is a global food and drinks business group.

Meantime then. has been passed around like a microphone in a karaoke bar. May be this is why their London pale ale has lost a little of its oomph I thought it had in the past. However, may be it will settle down and get its Mojo back. It won’t stop me drinking it, or trying their other offerings, especially on tap.

If I have given the impression I don’t like this beer, then let me put that straight. I do, but it just seems like it could do with more guts, it needs a little elevating. Alastair Hook set out to create beers that had more flavor and depth than the mass produced beers.

I think he achieved that on a considerable scale, however now owned by a mass brewer, may be they have lost their charm.

Back to the beer in question, Meantime London Pale Ale, one thing it does have, is drinkability. Made with Cascade, Centennial and Kentish Golding hops, there is the citrus and bitter tones that you would expect.

It pours a deep amber covered by an ample frothy head, which does fade, but keeps a little for the duration. It produces a mild lacing around the glass walls as it goes down, and it does go down swiftly. The aromas that rise to the nose are not strong, but there is a definite citrus scent with a floral coat.

Tasting is a similar picture, as a grapefruit like citrus swirls around the mouth a slightly bitter undertone joins in. It’s mellow, however it is good and at just 4.3% Vol a definite session beer. Summing up, it’s an easy to drink, everyday session beer and gets a 3.9 – 5.0 rating.

There is more beer to be had at Meantime Brewery, from red ale to chocolate porter, as well as IPA’s and lager. All will make an appearance in my fridge some time in the future and I sure will be enjoyed too.

Made from a variety of five American hops from the Yakima Valley, alongside British and German Malts. This ale promises to be a fruity, citrus explosion and bitter to the end. With its reddish brown guise will it deliver on taste and body?

It could be a lively fruity beer that will satisfy the quench on a hot day. And with its 4.1% Vol will fit the bill nicely, slotting into the session beer bracket, it may become a BBQ star.

This is one that is definitely on my hit list, a full bodied IPA that promises to packed a powerful punch. Looking forward to acquainting myself with this beer.

Made with Fuggle and Goldings hops it is set to offer an earthy, woody bitterness that may bite hard. A hoppy, full bodied beer that weighs in at a heavy 7.4% Vol, it is not for the timid drinker.

Could be a future favorite.

Another full bodied beer, but this time in the form of a porter. It looks like a typical porter with its deep brown, almost black body and off white creamy head. Five dark malts are used to give it a deep body and chocolate vibe.

This porter would serve well as a dessert beer, or alongside and juicy steak with a rich sauce. However there may be richness overload, which may stop you reaching for another. At 6.5% Vol, it’s not designed for a session, so go easy and relish the chocolate paradise.

Meantime brewery has had an interesting journey so far. Starting out as a craft brewery intent on producing exciting beers, but now owned by a huge food and drinks company. I feel that although it is part of a large corporation, Meantime is set on keeping its craft roots.

A great thing of course and I hope it can pull this off long term. However, their London pale ale, even though it is a good all round solid go to beer, does lack depth. I am sure I have had a pint on tap in London itself several years back. I remember really liking it, but some how the recent can did not live up to that memory.

Having said that, it does not put me off drinking it and if I spot it on tap, I will dive in to see if I can rekindle the old memory. What are your thoughts on Meantime London pale ale? Share them below.