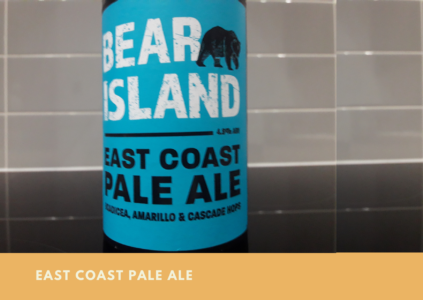 This bottle just jumped off the shelf as I walked past it in the store, so I had to have it. A Saturday night delight right after a butter chicken dinner, sweet. The East Coast Pale Ale promising its sweet malty flavor and citrus burst with a bitter end, had to be tried out.

Slightly chilled and ready to pour, in anticipation I grabbed the bottle opener and ripped off its lid. It looked good, but did it live up to those east coast characteristics, or was it just a big disappointment?

It is fair to say that the East Coast Pale Ale did live up to its name, but it doesn’t blow your socks off. The beautiful golden liquid with a generous white top sits there and dares you to taste. The malty caramel flavor is laced with a fruity citrus hit, it’s light and it’s crisp. As you enjoy the caramel and citrus buzz, it all ends in a hardy bitterness.

A first look at Bear Island and you could be mistaken for it being a brewery. In fact, it is a range of beer from the Sheperd Neame brewery in Faversham, Kent, England. You could say it is a well-established brewery, it has been brewing for over 3 centuries.

Officially it was established in 1698, but there are records that brewing on its site date back to the previous century. I think its fair to say that they know what they are doing and produce some great beer. Other beers from this brewery, but not in the Bear Island range include The Spitfire range and Bishops Finger which is a Kentish Strong Ale.

These are both great beers, and I must drink them again soon, just to refresh my memory.

There are many other beers produced by Sheperd Neame Brewery and they export to over 40 other countries, so their beers are available somewhere near you, probably. They are not just a brewery either, with over 300 pubs and hotels in London and the south-east.

Rumored as Britains oldest brewer, they know how to make beer, and Bear Island East Coast Pale Ale is worth a try.

Apparently there was once an Island within the grounds of this Faversham based brewery. One day a Bear and its keeper landed on this island, among other strange cargo.

We can guess then, how the Bear Island range got its name.

The pour of the beer is pleasing, and the deep golden beer settles with an impressive frothy head, which sticks around. The Amarillo and Cascade hops from America go hand in hand with the Boadicea hops. This gives a result with a sweet caramel and citrus nose that somehow describes the bitterness in the taste.

The first sip hits you with that malty caramel flavor that has the fruity citrus background. Every mouthful carries this same delightful experience, which then turns bitter.

This is bitter in a good way, the caramel hints almost turn to a bitter coffee, with the citrus fading in the background. At the same time it feels light and crisp, which was perfect after a tasty butter chicken meal.

The bottle was a generous 500ml, so didn’t’t disappear too quickly. It weighs in at a 4.8% vol, being a good middle of the road ale, that is easy to drink. I did enjoy this same beer on tap a few months ago, and it does have a richer body and flavor to it.

It doesn’t hit you with a punch like Brewdogs Punk IPA. Overall though, it is a decent beer that comes from a very renowned brewery, I would drink it again and again because it’s an easy beer to drink. It does have that great bitter-sweet twist after the citrus fades, which makes it worthy of a 4.2 – 5.0 rating.

The Bear Island range only consists of three beers and obviously the East Coast Pale Ale is one of them. The other two consist of a lager and a golden beer that is light on alcohol.

The Triple Hopped Lager from the Bear Island range is bursting with tropical fruit, such as mango and passion fruit. The three hops are well traveled with the mosaic hop from America giving that fruity note. The Saaz from Europe provides the classic earthy flavor, while the Challenger from the UK brings its smooth bitter floral properties.

This gives the lager bitter-sweet crisp taste that is clean and refreshing. Just the kind of experience you would expect from a decent lager. It weighs in at a middle of the range 4.6% vol, so could fit comfortably into the session beer bracket.

On a lighter note we have the newest addition to the Bear Island range. A gleaming golden beer that has the floral notes of pine coming from the UK challenger hops. There is a big hit of fruity citrus which comes from the American cascade, Amarillo and Citra hops.

The citrus hit runs through mango, passion fruit and grapefruit giving it that sharp light and refreshing taste. It’s a light beer on other fronts too, with its 0.5% vol and only 70 calories per bottle. It’s a slim trim option that is packed full of flavor.

The Sheperd Neame brewery have a history of brewing good beer, and good beer is the case with their Bear Island range. This range has something for everyone, with the bitter-sweet East Coast Pale Ale. The Triple Hopped Lager and the light on the alcohol and light on the waistline Noughty Bear.

For me the East Coast Pale Ale is not a contender for beer of the year, but it is a good middle of the road pale ale. It delivers a rich caramel body with a citrus hit and bitter ending, When you drink this beer, the experience is a chilled out one.

I look forward to seeing if there is a future bear that will add to this range of beers. Maybe, you have tried this beer or the Triple Hopped Lager, if so then share your thoughts on this or any other bear.