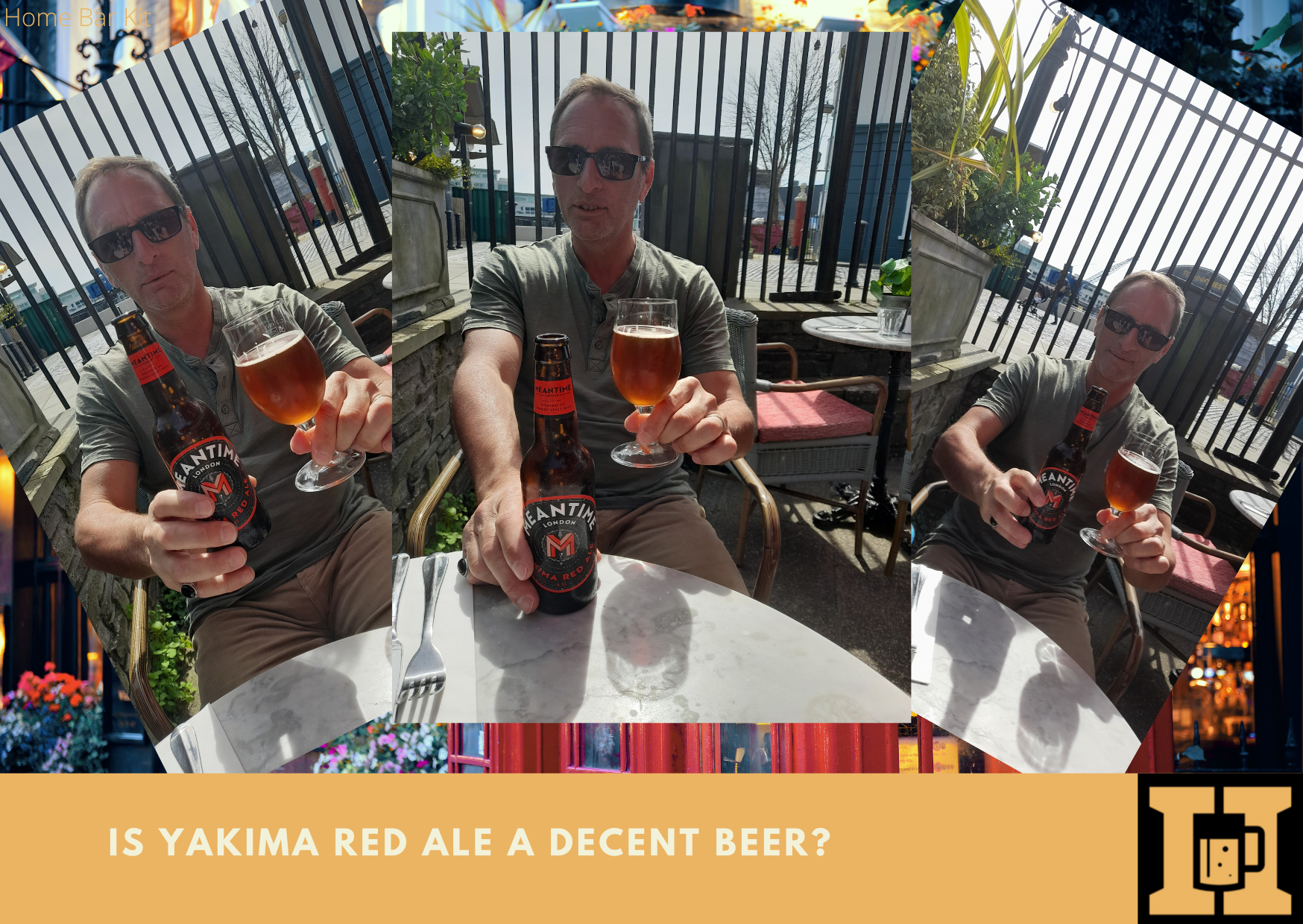 I do love a red ale, and Meantime beers are fairly good. So when I saw it on a menu, it made sense to give this one a test drive. However is Yakima Red Ale a decent beer?

When meantime sold out to a large brewery, for me their London pale ale and lager seemed to lose a bit of oomph. I hope the Yakima red has not fallen to the same fate.

It has to be said, yes it is a decent beer. However it hasn’t got the full body I expected. It settles in the glass to a deep amber and reflects a slight red tinge. The nose is lively with undertones of roasted coffee and caramel malts. This is topped with a wild array of tropical citrus and fruity notes. The taste is a similar story with a base of dark malts that take the weight of a fruity citrus frenzy. The disappointing thing is the body, I expected a full bodied beer. But it is too light and a bit thin, which lets it down a little. The rate my beer score hits 3.9 – 5.0.

Like I said I love a red ale, and although Yakima red is good, it is not as good as my expectation of it.

Founded in 1999 by Alistair Hook a university graduate with a degree in brewing, Meantime Brewery has humble beginnings. However along with Nick Miller CEO it soon grew and was then sold out to a larger brewery, which I cover in my London Pale Ale review.

This happened in 2015 and it then changed hands again and is owned by Japan’s Asahi Drinks Company. I think Alistair stayed on as managing director, but seems to have resigned at the end of 2019.

Hook is said to have sold the brewery for a cool £120 million, nice. So although it is sad to see a craft brewer sell out to a drinks giant, who can blame him.

I have to say I do like Yakima, it lacks body, but its still a decent beer. The malt bill is impressive with the German Caraaroma and Carafa giving that roasted malt base. Then you have the lighter Melanoidin and pale malts sweetening things up a little.

The same goes for the hop bill with Amarillo, Cascade, Centennial, Citra and Simcoe bringing an array of fruity citrus notes.

All the hops come from the Yakima Valley in America, hence the name of the beer. So with that combination I expect the beer to be fuller in body, but it just falls short of the mark.

It’s a shame because it could be an outstanding beer if it just had more guts to it.

I had this at a restaurant whilst enjoying a little lunch. The label is the typical Meantime tag designed by Bristol based Outlaw, this one aptly in red of course.

It pours a deep amber colour with a slight shade of red. The head is moderate, but quickly fades to a thin cover.

On the nose it is fairly lively with an undercurrent of roasted malts sharing flavours of coffee, caramel and a hint chocolate sweetness. Riding on top of this is a fruity citrus party waking up the senses. It is hard to pin down the fruits, but peach and grapefruit came to mind.

It supplies a nice taste with a roasted nutty malt base that carries a little sweetness. In flies a hoppy party of tropical fruitiness and an orange and lemon tang. A medium carbonation pops around the mouth with a moderate bitterness finishing things off.

It feels a little thin in the mouth and just lacks a bit of body kick. Apart from that it is a pleasant beer to drink, and 4.1% Vol it’s a session dream.

Meantime produce a decent range of core beers which include lager, IPA’s and a chocolate porter. The range isn’t vast, but they do seem to have pulled a few out of the bag recently. A lager called Donut Dunk and a black treacle stout called Half Back.

London Lager is a crisp and refreshing beer that is said to beer full in flavour. It has a hoppy hit and a pleasing bitterness.

It is an all English affair with East Anglian Malt and Goldings hops. At 4.5% Vol it could be a session favourite among the lager lovers.

I guess its an any time kind of IPA. A four hop combination should deliver a full on hoppy experience and a tropical bitter edge.

It weighs in at 4.7% Vol so is a moderate sessionable IPA

I think this is a special edition beer from Meantime to mark the clocks recently going back an hour in the UK. Dark bitter malts are balanced out with sweet treacle, its a black full bodied stout (well I hope so).

It jumps over the session fence weighing in at a respectable 5.2% Vol. Sounds like a brew to sample before its gone.

Meantime brewery produce some good beers, but it is a wonder whether they are as good as they use to be. Under the control of Alistair Hook there was an excitement around this brewery.

Has the fire gone out and been replaced with mediocre?

I hope not, however I just wish Yakima Red Ale just had a bit more body.

What is your view on Meantime beers, if you have sampled any, then do leave your thoughts below. It will be interesting to see if you think Yakima lacks body.