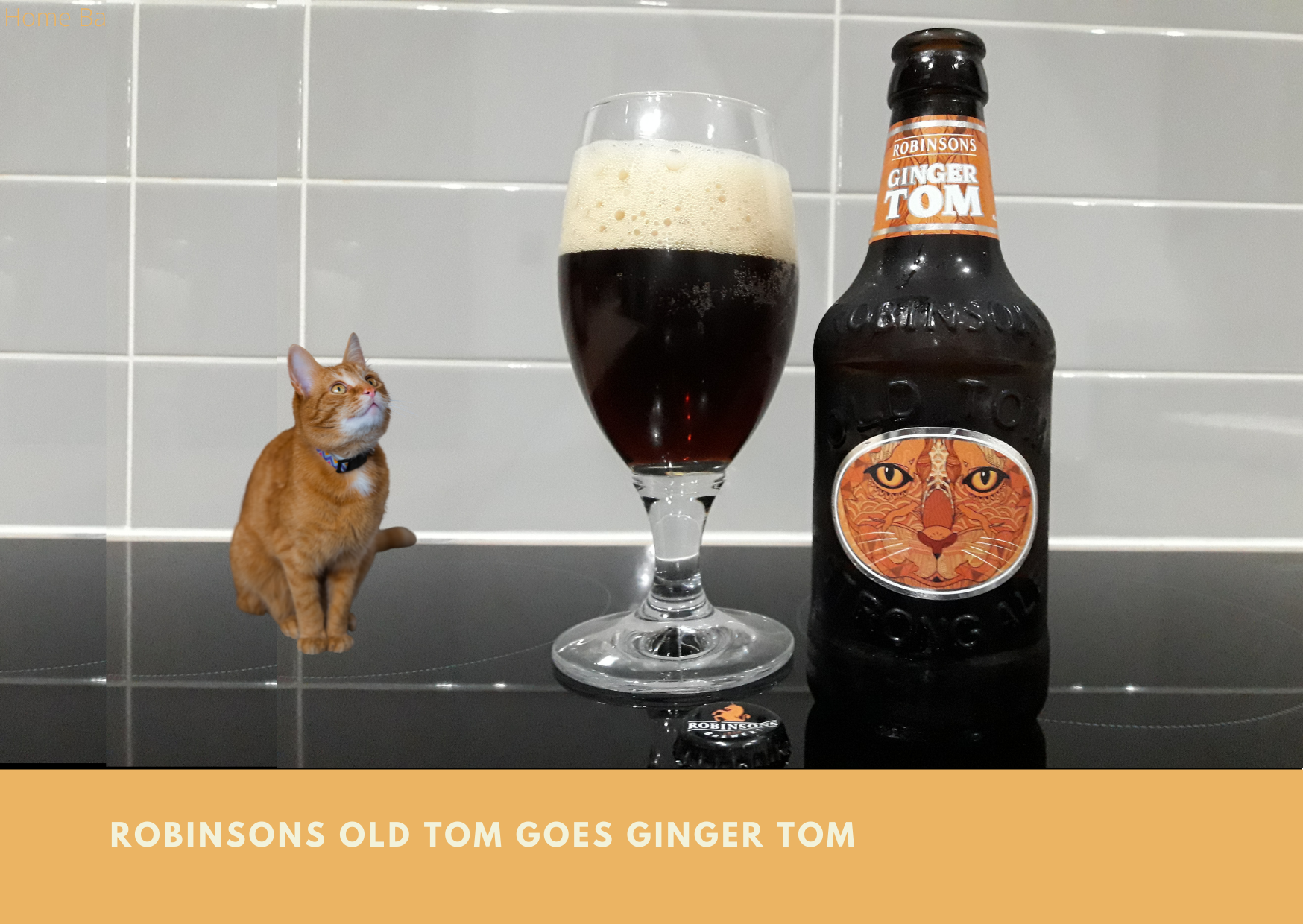 The legend that is Old Tom, the strong ale from Robinsons Brewery has gone ginger. It is not a recent transformation, but the first time I have tried this spicy beer. With a ginger version of the famous cat face on the bottle, it draws you in, those eyes. Robinsons Old Tom goes Ginger Tom, but why?

Old Tom strong ale is world famous and been around for over 100 years. It has more than 50 awards under its belt including Worlds Best Ale in 2007 and 2009. It’s and old cat with experience, so how does Ginger Tom fair against it’s much older brother?

If you like ginger, then you are in for a treat. It pours a beautiful dark body housing a rich creamy head that produces an ornate lacing on the drink down. The nose is a gift of ginger (wasn’t expecting that) with hints of malty caramel and a spicy backdrop. The taste is a similar affair reminiscent of ginger beer. A spicy peppery hit builds as you drink leaving the tongue tingling. A sweet caramel aftertaste is weaved with a bitter note. A decent beer if you like ginger, rated 4.0 – 5.0.

It’s a ginger treat, but it’s not Old Tom.

The story starts way back in 1838 when William Robinson acquired the Unicorn Pub in Stockport, England. Eleven years later Williams son George takes over the running of the pub and begins to brew ale. Move on another decade and Frederic the younger son of William is involved. Brewing is expanded with the purchase of a warehouse.

Moving into the 1870’s and Frederic continues expansion with the purchase of more pubs. This amounted to around a dozen by the time of his death in 1890. The turn of the century see Frederic Robinson Ltd is formed and a few years further sees a new build. A new brewery is built complete with a bottling plant.

The early 1940’s saw the Robinson brand expand into North Wales with the purchase of the Black Lion pub. The 50’s saw a Knighthood, while the 70’s saw a new packaging center. By the turn of the next century Robinsons is run by the sixth generation of the family.

A £7 million pound investment results in a new brew house in 2010, which resulted in Robinsons ales being distributed worldwide. Fast forward to the present day and we find that Robinsons has a rich history spanning over 184 years. It is one of the largest family brewers and has around 260 pubs in the North West of England and North wales.

Old Tom is a vintage beer that has been around for over a 100 years. It’s fair to say that it is an established beer with numerous accolades to its name. However it has a younger brother that wears a ginger coat and gives old Tom a bit of spice.

Those rich dark malty flavors of the old timer have been combined with a special spicy brew oozing Ginger and pepper. It has an infusion of Chinese ginger root with botanical extracts and pear juice. The spice and pepper are evident, but the pear did not make an appearance for me.

The bottle is as attractive as Old Tom himself who went through a rebrand several years ago. The original cat on the label was a sketch of the old brewery cat Tom drawn by head brewer of the time Alfred Munton. Today it is just the cats face with those eyes that just draw you in.

The anticipation of something special is in the air as you snap the crown off the top. The pour sees a rich dark oxblood beer cascade into the glass. It settles with an ample frothy cream top that lingers and dresses the glass wall with a handsome lace.

Ginger spice caresses the nose and alerts the senses. A sweet malty caramel comes through with a sprinkle of pepper. Lou experienced the aroma of ginger biscuits, which is a fair point.

The nose sets up the taste buds for a similar experience with the spicy ginger in the forefront boldly expressing itself. A modest pepper hit comes through that builds with every sup leaving a warmth in the mouth and throat. Finally there is a sweet caramel offering that comes through in the aftertaste with a light bitterness.

On the whole a decent beer that you will either love or hate. If you don’t like ginger then it will be the latter. However, even if you do like ginger, the latter could still stand. I do like ginger, but I couldn’t drink a lot of this beer.

For this reason it wouldn’t be a session beer and at 6.0% Vol the strength reflects this too. Likewise a rating of 4.0 – 5.0 reflects this also. It stands for me as a try out beer, but not one I will be visiting often.

A brewery as old as Robinsons know what they are doing when it comes to brewing beer. So it would be rude not to try more of their offerings. From the old timer Tom to a dizzy blonde pale ale, both of which will be heading my way soon./

I have to start with the original Old Tome Strong Ale, it’s a legend among beers. Dubbed the original craft beer, it is still brewer the same way as it ever was. A rich malty beer with dark fruit aromas, this beer is a historic masterpiece.

A deep rich color with a burgundy hint, it is strong, full of flavor with a hoppy bitterness that has a port like finish. At 8.5% Vol it lives up to its Strong Ale label. I had Old Tom some years back, but need to refresh my taste memory. Hence it will be featuring in my cooler soon.

Robinsons teamed up with Iron Maiden to produce a beer named after the bands song Trooper. The song was inspired by the charge of the light brigade. A middle of the road 4.7% Vol puts this premium beer in the session bracket.

It pours a deep gold with subtle malt and floral notes. A well balanced beer with malt and citric flavors and just a twist of lemon to boot. Pour yourself a glass of trooper and hit the play button and listen to what you are drinking.

Dizzy Blonde is a light refreshing beer with a modest flavor and a modest 4.4% Vol. A straw like gold pour reveals subtle aromas of hops and citrus. It’s a cheeky zest fest in the mouth with a lemon hit and a little sweetness ending in slight bitterness.

It won’t wow the senses, but it is a good middle of the road beer. It promises to refresh the palate on a hot day, when a light crispy beer is in order.

As far as Ginger Tom goes, I can only say it is an acquired taste, it’s pleasant beer with a definite ginger character. But with a big brother like Old Tom himself, I don’t think any one will pick on this beer too much.

If you don’t like ginger, then don’t get involved, why put yourself through it. On the other hand, if ginger is your thing, then this will be a beery treat. For me it was okay, however we won’t be striking up a meaningful relationship, more an occasional visit at best.

Be careful if you see it on the shelf at the store because those eyes just draw you in. Before you know it, the bottle is sitting comfortably in your fridge. What the hell, give it a go and share your thoughts below.