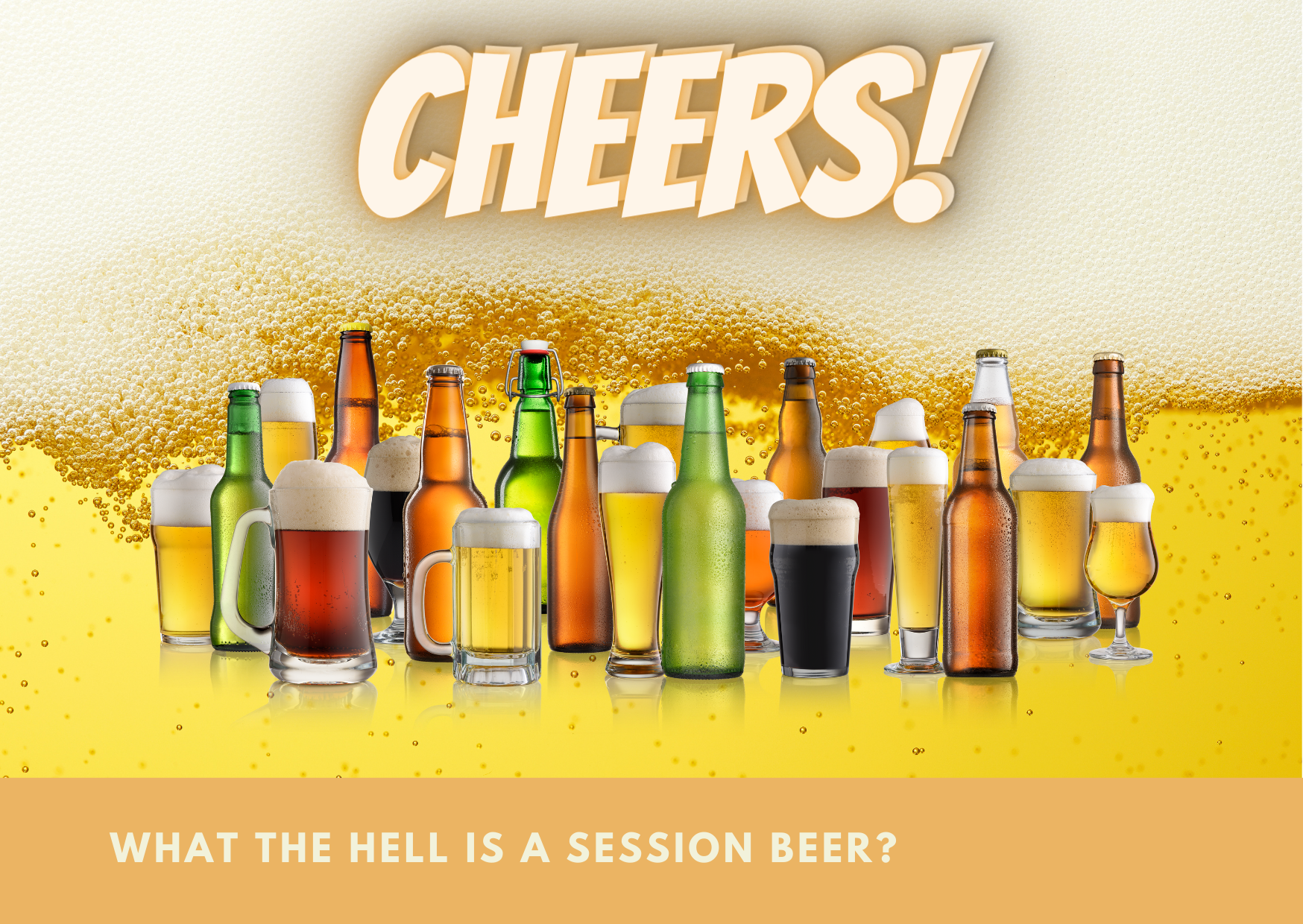 The term a ‘session beer’ is a very debatable subject, what it is? What defines one? Where did it come from? There are many opinions around the world, which can differ from country to country. From your everyday beer drinker to industry experts, opinions can differ, so what the hell is a session beer?

You may have heard the term, you may have not. It is surprising how many people haven’t heard the term, especially with the recent trends. Some brewers are even marketing beers as session beers. The term is on the label, or even in the title. Another term used is ‘all day beer’ which seems to amount to the same thing.

If you like to enjoy a beer, then chances are you would have had a session beer, whether you knew it or not.

What The Hell Is A Session Beer?

In my opinion a session beer is a beer that you can drink over several hours without losing your faculties and falling over. It’s the type of beer that will get you through a party or wedding reception, which span several hours. This means it will need to be under a certain strength or ABV, if you are going to last the duration.

Now you know, you can choose your beer accordingly. Choose the right strength for the length of the drinking session. This could be deemed as responsibly drinking and we should all practice responsible drinking.

What Defines A Session Beer?

I guess the strength of a beer defines whether it is a session beer or not. This is where some of that debating surfaces. People just can’t agree on the level of strength a beer should be for it to fall into the session bracket.

There seems to be two levels of strength that pop up the most, one is Alc 4% vol and the other Alc 5% vol.

Alc 4% vol is alcohol by volume or ABV, they are the same thing, a guide to the strength .

Here are a few examples, starting off with the lowest first.

This is from Bellfield Brewery and the name says it all, it is clearly made as a session beer. A beer you can drink several of over a period of time. It’s described as bright and citrusy, and is Alc 3.8% vol. For your information it is also gluten free and suitable for vegans, Bellfield are pleasing the crowds here.

Okay this one is not in the name, but it clearly states under the name on the can, ‘Session IPA’. Again made for surviving a drinking session unscathed. This one weighs in at Alc 4.1% vol which has gone over the 4% mark. Goose Island who are based in Chicago describe the beer as ” a go to, have more than one, easy drinking IPA”.

ShinDigger Brewery based in Manchester, England hit the session thing on all levels. A Shindig in the UK means party or event where lots of people gather to party. This brewery not only brew beer, but hold Shindig events (parties) which they call ShinDigger Sessions.

The beer ShinDigger Session is described as “All day drinker session IPA. Session by name, session by nature”. It comes in slightly higher again with a Alc 4.2% vol.

This contribution comes from Founders Brewery in Michigan, USA. It’s marketed as an all day IPA, which there is no getting away from because it’s the name of it. Not only that, but under the name is the term ‘session ale’. It is the strongest among these examples, with an Alc 4.7% vol, which is creeping towards the Alc 5% vol lid.

Here is a short video of Brewmaster Jeremy Kosmicki who explains what Founders session IPA is all about.

Should we rely on the breweries to define the strength of a session beer? That would be okay if they all agreed and set an industry standard with a clear strength bracket. One thing that is clear, people are different, so their opinions on many subjects are different.

You may decide a Alc 4.8% vol beer is your go to beer, the one that is the perfect contender for a session. On the other hand I might fall off my stool after two of your chosen beer. We are all different, so we need to choose our own strength beer for a session.

What defines a session beer is you, not the breweries and not your mates. You are the only one that can define the right strength session beer for you.

When did this little term come about? May be it is and old term from years gone by, or may be it is a fairly young term only used in recent years. It’s a bit of a minefield, but we do love to know the origin of things.

There are references to when British pubs had two sessions of opening times. One at lunchtime and one in the evening. Workers would visit the pub in their lunch breaks and swill down several pints, before returning to work. Now if they were drinking several pints of a Alc 6.5% vol beer, there would not be much work done in the afternoon.

That would not only affect business, but also be dangerous too. If on the other hand the beer they consumed in their lunch break was a lower strength, then that would be better. Could this be where the session beer started?

Where Are The Facts?

There are no real facts to support that theory, so it can’t be an official starting point. The term ‘having a session’, or ‘going for a session’ are common in British culture, which means drinking for several hours. May be that is where it comes from.

Who Knows The Truth?

I have search for the truth, and believe me it takes you down a rabbit hole. You could spend the best part of day, or even a week and still be none of the wiser. I did find an interesting article by Martin Cornell from his website Zythophile. The article is about trying to find out where the term ‘session beer’ comes from. Also when it was first mentioned.

It is a long article, but did he get to the bottom of it? No.

His readers even went away and did their research in the hope of cracking it. Again nothing, except some theories that have no facts attached to them. Good effort Martin, I will check back to see if you ever find the source. You can read the article here – How Old Is The Term ‘Session Beer’?

Whether Martin or anyone else can ever reveal the history of the term ‘session beer’, it is here and now that matters. And more importantly, how session beer goes forward.

So session beer is here, and I think it is here to stay. In fact it has been with us all along, there have always been beers that are below Alc 4% vol, they just haven’t been referred to as session beers.

The difference is that breweries are actually thinking about the whole picture. They are producing beers with a lower alcohol content that have more flavor. More complex combinations to dance on the taste buds, but with a great depth of flavor. All this while keeping them within the session bracket (whatever that is).

We as the consumers are becoming use to session beers, we like them. So the race is on to produce session beers that will keep the punters interested.

I think going forward we will only see better session beers for us to drink. The pubs and bars across the world will offer more and more choice as time goes on.

Well if you didn’t know what a session beer is, you do now. As for the history of it and when it first came about, like me, you are none of the wiser. If I do find out, then I will report back, if you find out then share your findings below.

As I mentioned earlier, you find the right strength to suit you. Don’t just pick up a bottle or can that says session beer on it and accept it will be fine. Always check the ABV percentage and stick within your own limits. The goal is surely to enjoy a good beer and have fun, not be bouncing off the walls.