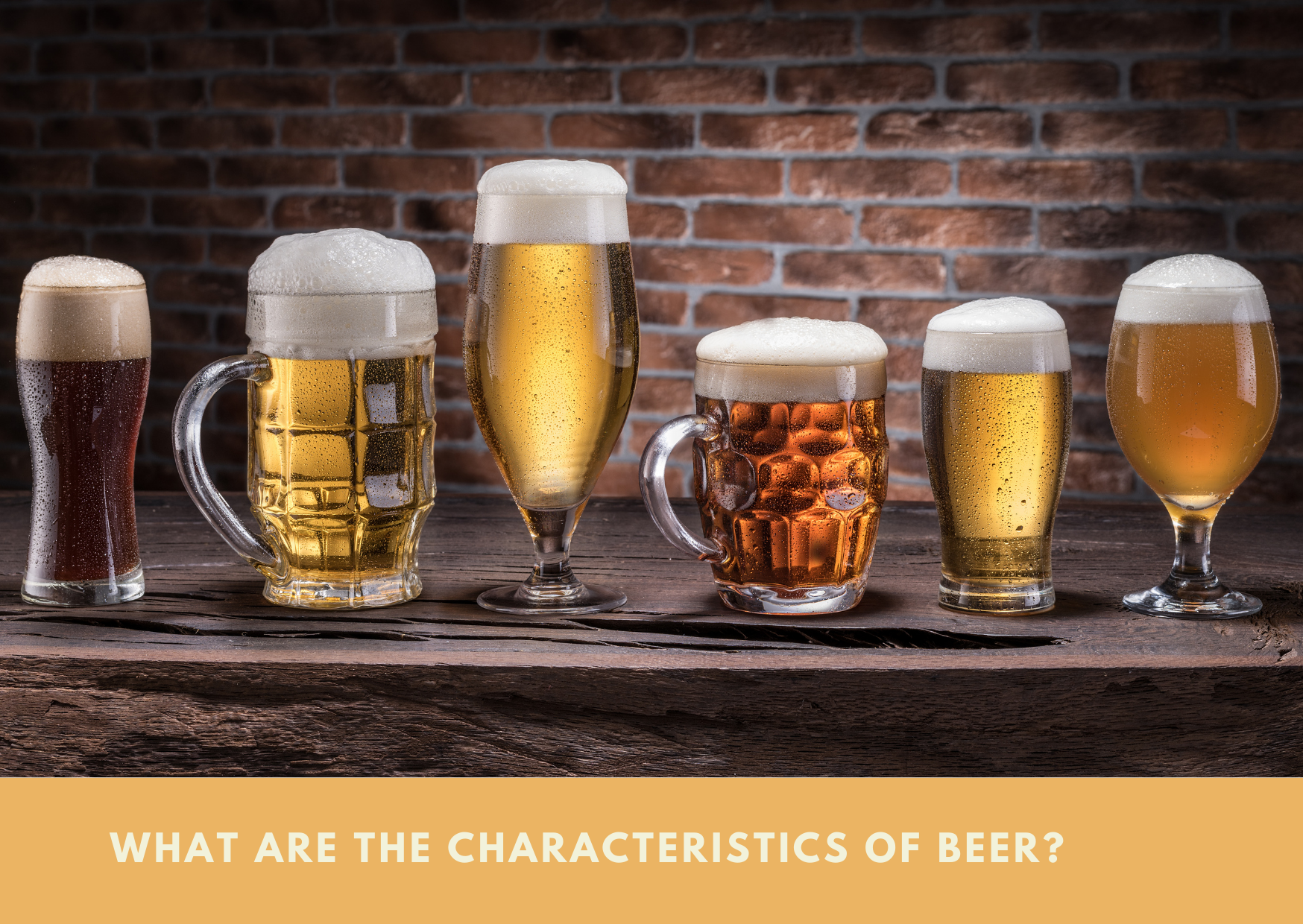 Beer is one of the most consumed drinks in the world, it is up there with tea, coffee and of course water. We are a world of beer lovers, but can we describe the real elements of a beer.

No one wants to come over as a beer snob, but it enhances the experience when you know what to look for in a beer. I am no Cicerone, but I do like to go through the characteristics of a beer, especially when trying a new beer.

What Are The Characteristics Of A Beer?

It is an alcoholic drink that is brewed using malts, hops, sugar and water, which is fermented with yeast. There are many styles of beers, especially with the boom of the craft beer industry. But they all fall into just two categories, with the exception of those that use wild yeast, such a Lambic, which I won’t into here.

The two main categories of beer that we know and love are ale and lager. You will find many styles of beer in each category. What is the difference between ale and lager.

Ale is the oldest type of beer that has been around for centuries. It is said to date back between 5000 to 7000 years ago depending on the source you read. Although that was blown out of the water with a discovery several years ago of beer dating back 13000 years. I think it is fair to say, it’s an old drink.

An ale is brewed by fermenting at fairly warm temperatures, around 20 to 22 C (68 to 72 F). It is brewed with a strain of Saccharomyces Cerevisiae yeast. This yeast will float at the top of the tank and are known as top fermenting yeasts.

An ale can be brewed in less time than a lager, which is probably why micro breweries choose to brew ale over lager. There are many types of beer that fall under the ale category. These include pale ale, Indian pale ale (IPA), brown ale, porter and stout.

Whereas ale dates back thousands of years, lager is a lot younger and dates back just hundreds of years. It’s the new kind on the block then, and is brewed slightly different from ale.

Lager is brewed by fermenting at lower temperatures, around 7 to 13 C (45 to 55 F). A lager is brewed with Saccharomyces Pastorianus yeast. It differs from the yeast used in ale because it settles at the bottom of the tank. known as bottom fermenting yeasts, they ferment at cooler temperatures which slows down the brewing time.

This is why lagers take longer to produce and need to be stored longer in their tanks. This where the name comes from, lager is taken from the German word lagern, which means to store. Again there are many types of beers that fall into the lager category. Including the pale lagers like American lights and the pilsners, amber lagers such as Marzen and Vienna lager. Then there are bocks like Maibock and Doppelboch, and dark lagers such as Munich Dunkel and Schwarzbier.

The Four Elements Of Beer

There are four general elements of a beer that let us understand it or describe it. In terms of judging a beer, there are a few variations to this, such as an overall impression of a beer or alcohol content.

For now we will stick with the four general elements, which are

What Do You See?

To get the best out of the appearance, a beer needs to be in a glass. The glass used needs to be clean, otherwise you will end up with dead beer. Once you have a clean beer glass, then it is time to pour the beer.

This part is exciting, especially if you are trying a beer for the first time. The beautiful liquid cascades into the glass swirling around creating a white foam top as it settles.

The first part of the appearance is the color, it may be a light gold and have a light body and low bitterness. Or it could be a dark brown like a porter with light fizz and a high bitterness.

We then look at the fizz or carbonation of the beer. A subtle flow of bubbles will create the head and release the beers aromas. The carbonation also contributes to the taste and mouthfeel. The bubbles should rise to the top, if they stick to the side of the glass, then it may not be a beer clean glass.

It is good to have good head on the beer, but not so much as it forms half the glass. A head that lasts the duration of the beer is also good, and is responsible for leaving the lacing around the glass.

A quick search for a Beer Color Chart will show the types of beer that fall within each shade.

What Do You Smell?

The second element is how the beer smells, what aromas do you get from it? The smell of a beer comes from the blend of yeast, malts and hops used to brew it. During the brewing process the yeast can produce some fruity. sweet or spicy notes.

The malts can bring a smoky, nutty, roasty or even chocolate aroma to the beer. Whilst the hops are a major player in the aroma of a beer. A combination of how many hops are added and at what part of the brewing process they are added can determine is distinctiveness.

The variety of hops used will also contribute to different aromas you may detect. Amarillo will has a citrus aroma like grapefruit, orange or lemon. Calypso gives a more fruity aroma like pear and apple. Chinook can add the aroma of spice and pine. These are just a few, there are many more, but you get the idea.

The smell of a beer can enhance the flavor, it sets you up for what to expect. It can be different for everyone, we will not all pick up the same aromas, but it is worth taking time to smell your beer.

What Do You Taste?

The third element is the taste, which is the best part of any beer. Having gazed at your beer and sniffed those aromas up, it’s now time to find out how it tastes.

A heavy malt will give a sweet taste, it may scream caramel or chocolate or give that smoky, nutty taste. If the beer has a heavy hop presence then it may come across citrusy or fruity. There may be a spicy element or the taste of orange, lemon or grapefruit.

Just like the aroma of a beer that can be complex if several varieties of hops are used. The same goes for the taste a layered affect my take place. Several flavors come through and its a taste explosion. A lighter beer might taste refreshing and crisp, whereas a darker beer might taste strong and full bodied.

The taste is unique to you as is the aroma, it’s a personal experience and one that should be enjoyed and savored.

What Do You Feel?

By this, I mean how does the beer act in your mouth? How does it feel? What tastes are you left with when it has gone?

The carbonation has an impact on mouthfeel, the more carbonation the more the beer will dance on your tongue. A light beer may have strong carbonation and give the feel of a refreshing crisp feel to the mouth. A darker beer or a beer with less carbonation may not dance so fast, but can feel smooth and creamy.

Taste a crisp fresh lager, then try a porter or stout and you will experience a totally different mouthfeel with each. They cat differently in the mouth and the feel different too.

Once the beer has given you that mouthfeel and it is swallowed, it’s not all over. The beer will leave you with a little present to savor. The after taste, a flavor or three that lingers in the mouth. It may be a fruity pear, or the citrus of grapefruit. A sweet caramel or that bitterness of coffee, it may not just be one flavor either, you may be left with a combination.

Like a fine wine, beer can also be enjoyed in a more thorough way. These four elements help experience the beer in full. The look is pleasing, the smell sets you up for the taste, you can often taste what you smell. Finally the after taste leaves a lasting reminder of the whole experience.

I use these four elements to rate my beer, it adds to my enjoyment and helps me to describe the beer. How do you enjoy your beer? Share your thoughts below on how you experience the appearance, aromas, taste and after taste of your beer.