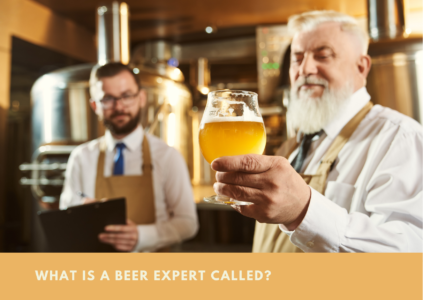 We are familiar with the term Sommelier, the wine professional, trained to know about wine and found in many fine dining restaurants. The Sommelier will pair wines with foods and can enhance your whole dining experience. They will also have knowledge of spirits and even beers, but wine is their real game.

What Is A Beer Expert Called?

A beer expert is called a Cicerone, and just like the Sommelier who is a master in wine, a Cicerone knows all about beer. There are four levels of certification, level 1 being a certified beer server, and the highest level 4 is a master Cicerone.

The skills that you learn to become a Cicerone are similar to that of a Sommelier. How to keep and serve beer, right up to pairing beer with food, and a whole lot more in between, which we will explore.

Before we learn all about what a Cicerone does and how to become one, it may be interesting to take a look at the Sommelier.

First off, how do you actually pronounce Sommelier and what does the word mean?

Say these three words “suh·muhl·yay” (sum o yay) and you have nailed the American pronunciation of Sommelier. The British pronunciation is a little more involved, “suh·meh·lee·ay” (sum el e a). The French pronunciation is “so·moe·lyé” (so mo lea), you are now multilingual.

There are different explanations as to where the word originates and what it means, the most common being it originates from an old French word saumalier, which meant a driver of pack animals. A person that transported supplies using pack animals as the engine.

It has also been referred to as an old word that means ‘Butler’, today we know it as wine steward or wine expert. A qualified professional that has an extensive knowledge of wine, and can advise, store and serve wine to the highest standards.

You will find a Sommelier in many fine dining restaurants, they will advise customers what wines will go with the foods they have selected. Although most will associate a Sommelier with wine, which is true and probably the part of their job they are involved in the most, they know about much more.

They know about spirits and beer too, and it may surprise you that they also have knowledge of tea and coffee.

What Is A Beer Sommelier Called?

We now know that a Sommelier has knowledge of beer, so why do we need a different name for someone that wants to become a beer expert. Why not just make use of the same word, instead call them a beer Sommelier or a Sommelier that specializes in beer. The same would go for wine, spirits, or tea and coffee too.

It has come about that there was a need to separate beer and give it its own experts, I can only imagine that with the increase in craft beers and breweries over the last decade or so, this was probably why a beer Sommelier has developed into the Cicerone.

First thing’s first, how do you say it?

The American/British pronunciation is “si·sr·own” (sis er own), I have heard it pronounced “si.sr.owny” (sis er owny), which makes it a little more European.

The word originates in old English and was a guide, someone who leads sightseers around museums and galleries, and who answers questions on those subjects. The word is now being associated with a beer expert, that is a hospitality professional certified in selecting and serving beer.

Just like a Sommelier is to wine, a Cicerone will know all the beer styles, know how to store and serve beer, and also be able to pair the right beer with the right foods.

Next time your home bar is open to friends, tell them you are the resident Cicerone, get a sign made up saying you are the head Cicerone, have some fun with it.

Or perhaps, you are intrigued and instead of just having fun with your buddies, would actually like to find out more about becoming a Cicerone.

How To Become A Cicerone

You may know a lot about beer, but you can’t just take on the title and announce you are a Cicerone. It is an official title that requires studying, taking tests/exams and becoming certified as a Cicerone.

That should not put you off though, amateur brewers have been known to end up with their own successful breweries. There are some with home bars that have ended up owning their own bars and pubs. If you are passionate about beer, then why not pursue it and become a Cicerone.

There is only one place to get the official certification and they do provide all the study material to pass all the tests needed at each level.

It is called the Cicerone Certification Program and the starting point is to register an account on their website and then go from there. The thing’s you will learn about are how to store beer, how to serve beer, all the different beer styles, beer tasting and flavors. You also learn about beer ingredients and the brewing process, as well as how to pair different beers and foods together for the best experience.

There are four levels of certification.

This level includes beer clean glassware, how to handle beer properly, beer language and flavors, and of course how to pour the right way. The exam for level 1 is an online exam and it contains 60 multiple choice questions of which you have to get 45 right in order to reach the 70% required pass rate.

There are 125,000 plus people that have achieved the level 1 certification.

This level is where it gets serious, it is about acquiring the skills of a professional Cicerone who is proficient in all thing’s beer, including flavors and tasting. This level will see you as a certified Cicerone and you are able to include the official logo on your business material. You will also be added to the certification directory list.

This exam is a bit more in depth lasting four hours and includes a written section, a tasting section as well as a some demonstration section. There are 4000 plus people that have around the world that are Certified Cicerone.

To take the level 2 exam, you must have passed the level 1 exam.

It continues to get even more serious, this level is about gaining extensive knowledge of the beer trade, from brewery processes to the glass. Identify beer styles and ingredients within a beer, blind tasting will be part of the exam.

The exam is a whole day and includes written, oral and tasting sections. There are several written sections multiple choice, fill in the blanks as well as essay style written papers. There are two oral sections involving discussions about the level 3 study material. The tasting part of the exam include flavors, beer types and describing beers from blind tests.

The exam requires an 80% pass rate and you must have passed the level 2 exam to be able to take the level 3 exam.

As, of 2019 there were only around 120 people that had gained the Advanced Cicerone certification.

This level is the highest level of certification and you will be exactly what it says, a master in all thing’s beer. You will be highly educated in brewing and all the processes of brewing, a master in all thing’s to do with beer, storing, handling, serving and be able to answer and explain anything to do with beer. Your beer and food pairing skills will be at master level.

This level can see your career in beer explode as you will converse with breweries, chefs and demonstrate your knowledge of the whole beer industry. At this level you will serve the industry as a consultant, educator or become the highest knowledge within a beer organization.

You are looking at an 85% pass rate for this exam. The amount of people that have gained Master Cicerone is pretty small, which makes you realize how highly this certification is seen within the industry. Just 18 people are Master Cicerone in the world.

To Sum It Up

This would get you on the road to a career in beer and it is the easiest level to complete. On the other hand if you love beer and you have a home bar, then the level 1 will also be a great course to study and pass, just to give you a better understanding of beer and how to store it and serve it in the right way. If nothing else, your knowledge and beer skills will impress your guests.

I think we have answered the question ‘what is a beer expert called?’ So, now you know what a Cicerone is, and that it can help you progress in a beer career, what are your thoughts. Share them below, whether you want to become a Cicerone or maybe you are one and can share your experience of the exams and industry.