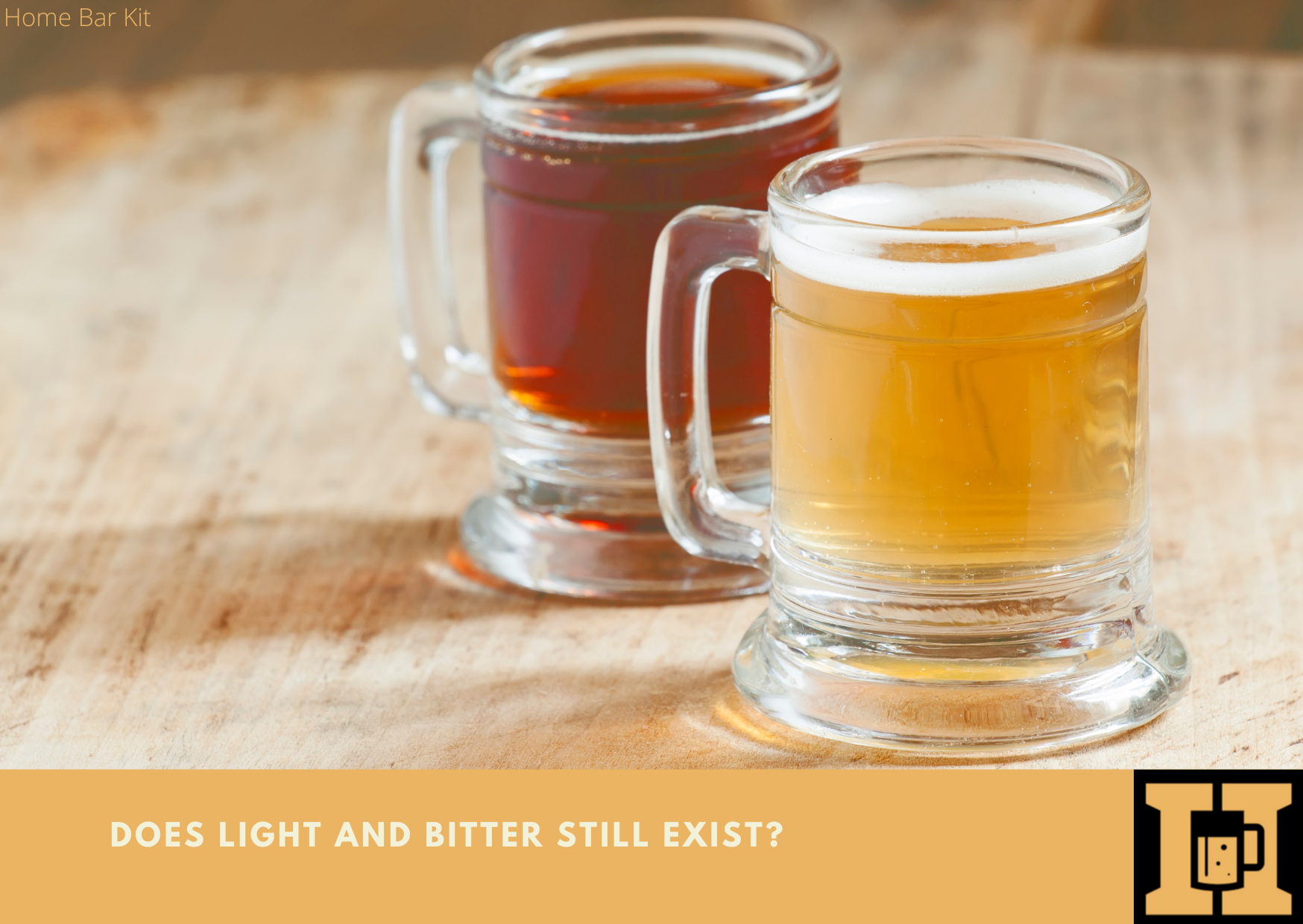 This subject is going to do two things. First, take me on a trip down memory lane, and maybe some of you too, and second, show my age. This is going back to pub culture in England back in the 80’s and beyond. I haven’t had a light and bitter since the 80’s, but does light and bitter still exist?

Unless you are of a certain age like me, then you may not know what I am talking about. Light and bitter is a mixture of two different beers. Take half a pint of draught bitter and a bottle of light ale. Add the light ale to the bitter and you have a light and bitter. No I haven’t lost the plot, this was an actual thing back then.

Does Light And Bitter Still Exist?

Try going into a pub and asking for a light and bitter and see what the response is. The bartenders look maybe something of a confused one. And even if they did know what it was, the chances of them stocking light ale is slim. I am not sure if anyone actually makes light ale anymore, but I am going to find out before the end of this post.

Light ale mixed with bitter is not the only beers we use to mix, there are others too. But more of that later.

What Happened To Light Ale?

Light ale as I remember it was not often drunk on its own, most would mix it with bitter, or even lager. However going back further it was consumed with meals. Because it was light with relatively low alcohol volume, it would be drunk with lunch or dinner. It was also known as a dinner or luncheon ale and some even labelled it so.

Why Would Anyone Decide To Mix Two Beers Together?

There are two main reasons for mixing a light ale with a bitter. First, in times gone by, lets say the 50’s and 60’s, ale on tap was not the best quality. Not that I know first hand, I am not that old, I’ve just been told this by an older generation.

A bottle of light ale which was a malty beer with a little hoppiness added a bit of life to a lacklustre bitter poured from the tap. A light ale would make a less than average beer more drinkable.

The second reason was a bonus for the drinker, unless you had a mean strict landlord or bartender. It wouldn’t happen now, but back then when you asked for a light and bitter this is how it went down. The bartender would pour a half pint measure of bitter into a pint glass. Then they would open a bottle of light ale and present that next to the half glass of bitter.

So comes the good part, the half pint of bitter was almost always more than a half pint measure. So you end up with more than a pint of beer when you add the light ale. This was definitely the reason my friends and I would drink this mix. You get more beer for your money.

Where Did Light Ale Go?

That is what I would like to know, but I guess like most things there is probably a combination of reasons. One could be that cask beers gradually improved so there was no reason to try and pump some life into them. A second reason may be the Campaign For Real Ale (CAMRA), an organisation set up in 1971 to, well campaign for real ale.

Whilst they went about their campaign for quality cask real ale, they are said to have ignored bottled beer. The poor little bottle of light ale may have suffered as a result. The thing is that beer in Britain has got better and better over the years. CAMRA deserve some of the credit for that, as well as the breweries too.

So it was inevitable that the mixing of beers would eventually fade out and little light ale would die a lonely death. Or has it?

Can I Still Get Light Ale?

Ask for a light ale in any drinking establishment today and they would probably serve you a pale ale. Light ale was like a lighter version of pale ale, especially by today’s pale ales. So you are not going to get a light ale in any bar nowadays. Having said that, you never know there may be some die hard old school publicans that still serve it. If that is the case, they would probably serve you a light and bitter without any questions.

Light ale is still available, I can hear the cheers from here. It’s not as easy to get it as it use to be, but there are still a couple of breweries making this forgotten beer. Well, I only found two breweries that still make it. However it is way more expensive than it use to be, probably because it is so rare now.

The two I found were from Courage and Youngs, both of whom use to make it back in the day. The Courage and the Youngs brand are now owned by Marston’s, but their light ale is still available.

Courage describe it as Britain’s most popular light ale and fully balanced with a malty flavor. Pale amber in color and a light, crisp and refreshing beer. At just 3.2% Vol it is an easy drinking session beer. It is tempting to go back in time and get me some of this old favorite. First, to try it on its own, I don’t think I ever had a bottle on its own, it just went in my bitter. Second, to give that old light and bitter another outing.

Young’s say it is light traditional beer and Britain’s most favoured light ale. So they are both claiming theirs to be the best, could they be the same? I don’t know, but Young’s also say very similar to Courage. It’s pale amber in color, has a complex but clean and fruity nose. However they do say that theirs is more bitter than the average light ale.

Interestingly, Young’s also state that it is often mixed with Young’s bitter. And what does that give you, light and bitter of course.

Of course with the amazing beer market we have today. And with the abundance of beers available, I don’t think light ale is going to make a comeback any time soon. There are too many hops and malts about for light ale to even compete. Nevertheless it is nice to know that it is still available, if only for a trip down memory lane.

What Other Beers Were Mixed?

I knew you would ask that question, so I am going to list the ones I know of. This doesn’t mean these are the only ones that were mixed, there could be many more. Also these are old style beer mixes from yesteryear.

Today we mix beer with other ingredients, we just call them cocktails now. The Black Velvet comes to mind (stout and Champagne), or a Chalada (lager, lime and salted rim) which is basically a salty lager and lime. I guess you could call a light and bitter a cocktail of beer. Maybe I should write a post about beer cocktails. Anyway moving on with the list.

Pour half a pint of a beer like pale ale into a pint glass and then top up with a stout. If you pour the stout carefully the bottom half will be the lighter ale and the top the dark stout. Guinness is used a lot for this drink. It can also be mixed as lager and stout.

Brown and mild, also known as a Boilermaker, is a half pint of draught mild bitter topped up with half a pint of bottled brown ale.

This one is now self explanatory, half a mild (a young ale) and half a bitter in a pint glass. It is often referred to as an AB, which stands for and bitter. At the time the most common draught beer was a mild, so most people wanting a mild and bitter would just order an AB.

One I use to drink now and again back in the 80’s, was snakebite. It consists of half lager and half cider in a pint glass. Just don’t have too many, they can be lethal.

One other I recall, but can’t remember what the mix was, is one we called Thames Water, because it looked like the color of Thames water. Of course there is a dash of lemonade in lager, named Lager Top. Add a little more lemonade and you have a Shandy or Radler. Add a touch of blackcurrant and you have a Lage and Black, or a Guinness and black.

So these are the beer mixes I can remember, but like I said there are probably more from days gone by. And of course there are many modern day beer mixes too.

So does light and bitter still exist? No, not in modern day pub culture, although you can ask. However we can seek it out and try it at home if we choose. And of course I will at some point, as well as light and lager, snakebite, and Thames water if I can remember the mix.

I am not saying these are the best mixes when it comes to tasty beer delights. Especially with the variety of beers around today. But it has to be worth trying these mixes out just for the fun factor. If you do share your experience and thoughts below. Also if you have any other weird and wonderful beer mixes to share.

2 thoughts on “Does Light And Bitter Still Exist”