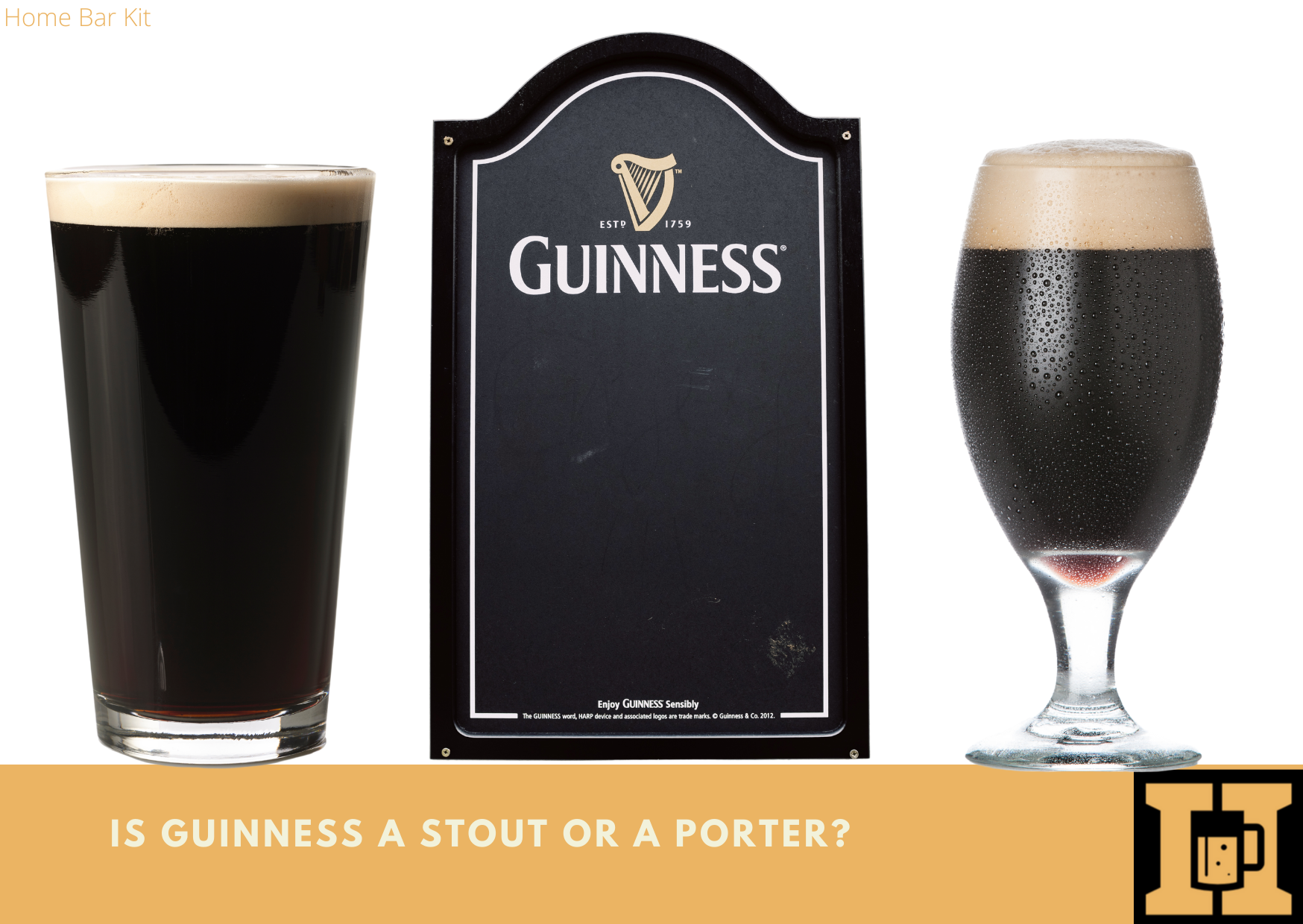 The black pint that has a thick creamy top balances the sweet with the bitter and has a roasted character. An Irish brew loved by millions of people worldwide that has been around since 1759. It is fair to say that this beer is well established and popular. However, is Guinness a stout or a porter?

The first beers produced by Arthur Guinness were not the black stuff we know today. It wasn’t until 1799 that the growing popularity of a dark beer in London known as porter caught Arthurs eye. He ditched the brewing of his ales and set about perfecting his own porter style beer.

Is Guinness A Stout Or A Porter?

So Arthur Guinness, hooked on the London style beer, decided to brew his own. This tells us that the Guinness we know today started out as a porter. Guinness then made a stronger version and referred to it as stout porter (stout referring to it as being a strong beer). Eventually the porter was dropped and Guinness became just a stout. So Guinness then is a porter that morphed into a stout and is now just Guinness draught.

So is a porter a stout? Or is a stout a porter? Or are they the same thing?

What’s The Difference Between A Stout And A Porter?

It’s a bit if a debate that doesn’t really matter now because of the many different styles of porters and stout that are brewed today. The real difference between the two is that traditionally a porter is made from malted barley. On the other hand a stout is made of roasted unmalted barley. This is not always the case today with the many varieties of both.

One thing that is certain is porter came first and it was born in 1700’s London. As the beer developed over time, some brewers started making stronger porters which became known as stout porters. The use of the word stout just referred to the beer being stronger (stout, meaning strong).

Stout then just meant a strong beer, but eventually became expressive as a dark beer. In time a stout porter just became a stout, a stronger version of a porter. Today there are porters that are stronger than some stouts, so the whole thing has blown up into a free for all.

Ask ten people what the difference is between a porter and a stout and you may get ten different answers. My answer is they are the same beast just in different outfits.

So we know that the beer style porter was born in London in the early 1700’s. It is said that London brewer Ralph Harwood was the inventor of the beer. Attempting to replicate a concoction known as Three Threads which is a mixture of three different beers. These three beers were served from three different casks in the drinking hole.

Harwood did just that and mixed three different beer styles and called it Entire Butt because it was served from one cask. The drink was popular with the porters of London carrying goods from the docks to markets and warehouses. However many dispute this as the real origin of the London Porter.

There is another account which was earlier than the story about Harwood being the inventor. In the early 18th century the brewers of London sold a heavy brown beer. With the influx of the Gentry coming into the city and their preference for paler beers, put these breweries under pressure to produce a better quality of beer.

Their answer was a better quality brown beer that was aged for longer to become more mellow than their previous brown beer. Said to be the Intire Butt Beer it eventually became a popular drink with the porters and the working class. It then became known as a beer style called porter.

So Arthur Guinness may have called his beer Guinness, but it was a steal from a popular style in London. He did not invent porter or stout if you define the two as separate entities. Arthur just took a beer style and developed his own version.

There is no doubt though that he did create a beer that would become the most popular of its style in the world. His version exploded and has become an icon of beers, the black stuff with the creamy head a 263 year old beer.

Of course Guinness have come full circle and now produce other beers apart from the black stuff. There is Hop House 13 Lager, Guinness Rye Pale Ale, a cold brew Coffee Beer and a Golden Ale. As well as the Dublin Porter and the West Indies Porter. A growing collection of different beer styles all worthy of a try.

Porters and stout eventually fell out of fashion and lagers took over. Obviously Guinness survived and is still a winner to this day. But over recent years porters and stouts have made a big comeback. Many craft breweries are producing some great and interesting versions of this beer style.

Northern Star from Northern Monk brewery is a chocolate caramel biscuit porter, which is very nice. Station Porter from Wickwar Brewery also a nice rich porter with a smokey bitterness. These are two great porters I have enjoyed in recent months.

So Guinness then started first as a porter, second grew in strength and became a stout porter. Thirdly it dropped the porter guise and became a stout. Finally it is simply known a Guinness Draught. So the answer to the question “Is Guinness A Stout Or A Porter” is simply YES. It is both and lovely it is too.

I’m glad I have cleared that up, but I am sure not everyone will agree with me. The difference between porter and stout divides opinion. And when it comes to Guinness, well there are many opinions. This is just my opinion from the research I have done. What is your opinion? Share your thoughts below and lets see where we all stand with porters, stouts and Guinness.

4 thoughts on “Is Guinness A Stout Or A Porter”