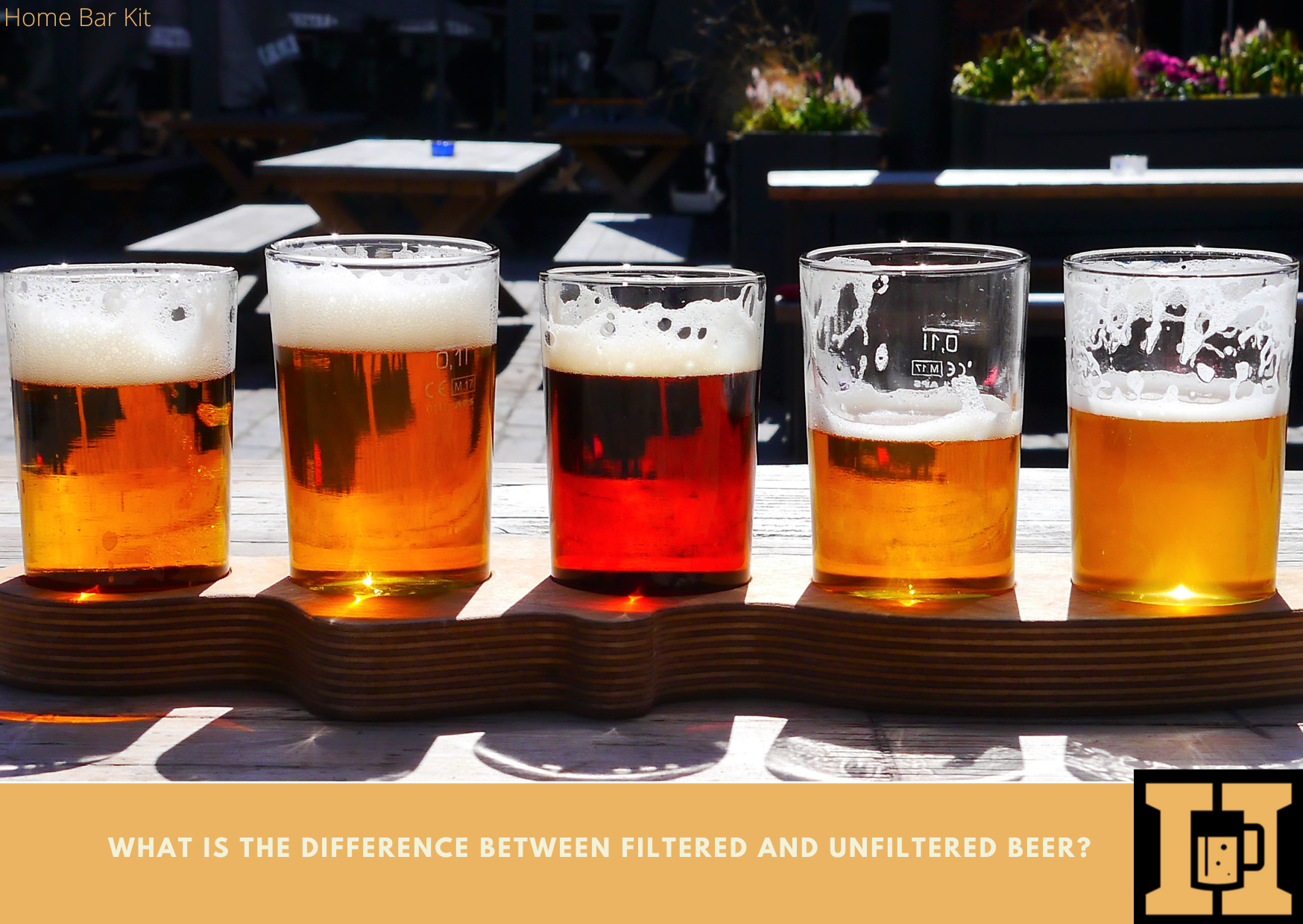 There are of course differences between the styles of beer. Mainly as the question suggests, one has gone through an extra process of being filtered, but what does that mean for the beer?

What Is The Difference Between Filtered And Unfiltered Beer?

In short a filtered beer goes through a process (filtering) which removes the sediment from the beer. This renders the beer stable and finished, which can prolong its shelf life. An obvious advantage when shipping and storing beer before it is presented for sale. An unfiltered beer is still active and can continue to mature in its retail vessel such as a bottle. Some say unfiltered beer has more aroma and taste, but a lesser shelf life.

The common opinion of why beer was ever filtered in the first place is to clean it up. The expectation of a beer was for it to be crystal clear and free of sediment.

Filtered beer led to a brighter clearer beer that retained a perfect foam head. It also cleared out fermentation products that could effect the taste of the beer and prolonged the shelf life.

So all that makes sense and clear bright beer without sediment did become the expected product. Also commercially it makes sense for beer to have a longer shelf life.

A beer can go on a long journey from country to country and then sit in a warehouse until its final destination, the customers hand.

So why then is there a trend for beers to be unfiltered?

An unfiltered beer may be hazy and can contain sediment. This was seen as unfinished or dirty beer, however that is not true, it just hasn’t been filtered.

This points to a beer being better if it is filtered. However many breweries, especially craft breweries are making unfiltered beers.

Some say that filtering can strip out some of the color, aromas and flavors of the beer.

An unfiltered beer will give a deeper color and have a hazy appearance, more aromas and more flavors, which is obviously a good thing.

Not everyone agrees with this though, and opinions differ considerably.

Maybe some smaller breweries don’t filter their beer because of the cost. Extra equipment and time is needed to put beer through a filtration process.

There even those that say an unfiltered beer has certain health benefits over a filtered beer. I know, I couldn’t believe that one either. Obviously this is as long as it is consumed in moderation.

Apparently unfiltered beer is rich in antioxidants and can help fight against bad cholesterol. There is even a mention of help against the big C, which is some bold claim.

B vitamins and folic acid which help with body cells. A high fiber content aids digestion and unfiltered beer is mineral rich which helps with many things in the body.

I have found no scientific proof of this, so am not saying any of this is true. But I have found many websites that explain these health benefits of unfiltered beer. I am not saying their information is false either, but I am sceptical.

Which Is Better Filtered Or Unfiltered Beer?

So which is better? Filtered beer gives us a clean crisp product, but could be stripped of some of its qualities. Unfiltered beer on the other hand may be hazy and contain sediments, but keeps the qualities of aroma and flavors.

I believe there is some truth to these two differences. If I drink a mass produced beer that is filtered, there isn’t always much of a nose to it. The same goes for flavor, a lot of them do lack flavor.

The opposite is true for a lot of beers I have tried that are unfiltered. Some of them are really lively on the nose and bursting with flavor.

There is another dimension to filtered or unfiltered beer. In between the two can be varying levels of filtration. Depending on what type of filtration method is used will determine how close the beer is to unfiltered or sterile filtered.

However that is a story for another day, the article I linked to earlier (health benefits) explains the different filtration methods.

There are definite differences between filtered and unfiltered beer. Whether it be for commercial reasons and shelf life, or for maximum aroma and flavor.

Filtered beer has dominated for many years, but now with a trend for unfiltered beers we have a choice. Everyone will get something different from each type, so it does really come down to personal choice.

I don’t think it can be said that one is better than the other or that one produces a more superior beer to the other. It depends what characteristics an individual wants in a beer.

It will be interesting to know what you think of the filtered vs unfiltered beer. Why not drop your opinion below and share your thoughts on the subject.

It must be beer o’clock, now what shall I have filtered or unfiltered?