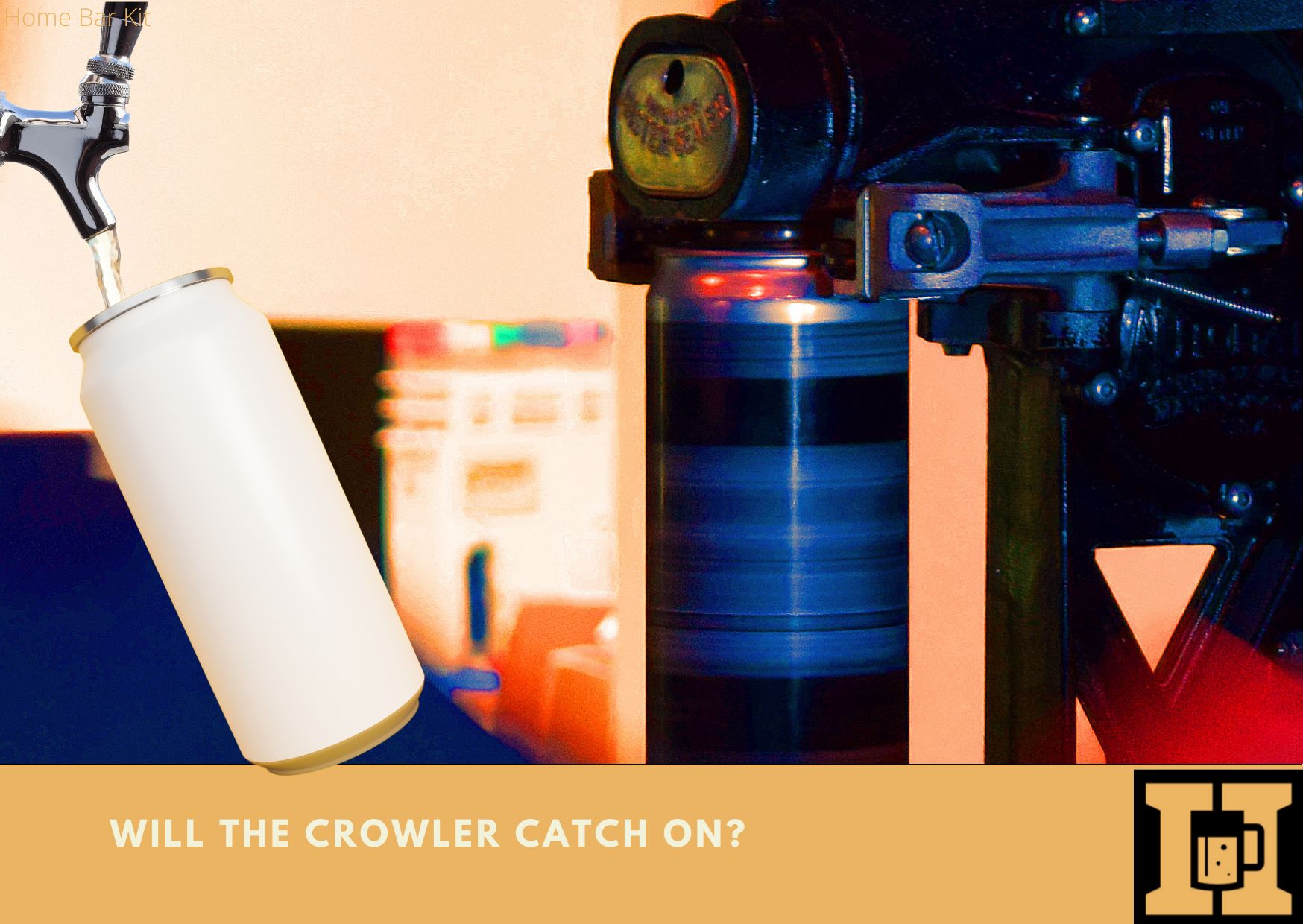 If you are lucky enough to live near a brewery or tap room, then you will probably be able to purchase beer to go. A beer fresh from the tap packaged to enjoy at home. These are known as Growlers which are large bottles filled for take out beer. But what about the Crowler? And will the Crowler catch on?

The crowler is the same concept as the growler, however instead of a large glass container, it is a can. A super sized can that gets sealed at the source, right there in front of you. Sounds cool, but why aren’t all breweries and tap rooms selling them?

Will The Crowler Catch On?

It already has, if you live in the US anyway. A crowler is not a new thing, it has been around for several years. A now popular way to buy beer to go in America, however the UK is lagging behind. We have only just got to grips with the growler, but the crowler is finally filtering through. Hopefully it will catch on here and become as popular as it is in the US.

I won’t hold my breath though.

What Is A Crowler?

It is a large 32oz (946ml) can produced for filling and sealing one at a time. And it is hot on the heels of the growler as the best option for beer on the go.

Imagine you pop into a taproom to try a beer from the brewery. You fall in love with their popular IPA and would love to take a couple of pints home to enjoy later. This is where the crowler comes into play. The giant can is filled with that IPA and sealed on a small machine right there.

Take it home, pop it in the cooler and later on, crack the can just like you would a normal can. Beer from the tap enjoyed at home. It’s a great concept and a great way to keep tap poured beer fresh for days or even a couple of weeks.

A well used container in the US and one that is in the UK, just not as wide spread. You can purchase your own growler and take it to your local brewery or tap room and get it filled with your favorite beer. A growler is normally a large glass jug style bottle with a screw cap lid.

However there are many designs of growlers including stainless steel and carbonated ones with tap delivery. They also come in a variety of sizes too. From a 64oz (4 pints) to a mega 170oz (10 pints), that conversion works out a little less in the UK.

The growler has been used for many years in the US and they even have howlers and bombers, which are smaller than growlers. The howlers being half the capacity of a growler at 32oz, while the bomber is smaller again at 22oz.

So which is best, the growler or the crowler?

The Growler Vs The Crowler

Both get filled with beer at the brewery or tap room to take home and enjoy. Or to take to a barbecue or park for a picnic. Whilst they both do the job well, the crowler comes out on top for keeping the beer fresh for longer.

Until it is opened of course, because you can’t reseal the can as you can the growler. So it needs to be consumed in one go, which shouldn’t be a problem. Having said that, even though a growler can have its lid put back on. You wouldn’t want to keep it for long as the beer will start to deteriorate from the word go.

The growler is a personal vessel, take it with you and get it filled, easy. But do you want to carry a growler with you on the off chance you see a tap room and want to get it filled. You can of course buy a new growler on site, but your collection of growlers will soon grow.

The crowler lends more to the spontaneous because they are filled on site and sealed to go. You then recycle the can, responsibly obviously. No need to carry a vessel with you, it is part of the purchasing beer deal.

You get all the advantages of a beer in a can with the difference of it being filled in front of with fresh beer.

Where Did The Crowler Come From?

Oskar Blues Brewery of Longmont, Colorado are said to be the first craft brewery to can their beers. This was back in 2002 and now the can packaging for craft beer has become mainstream. In 2012 they got together with the Ball corporation a manufacturer of beverage cans and sealing machines.

The result of that get together was the crowler can and sealing machine. A small machine that seals a can one at a time. This allowed them to fill and seal a large can in front of the customer. The crowler was born and has become a popular alternative to the growler.

The only downside is that you have to not only buy the cans, but also a machine to seal those cans. Oskar Blues went to to promote and sell those machines to other breweries. And now there are several manufacturers making and selling their own versions too.

Will The Crowler Catch On?

Like I said earlier it already has in the US. The great American beer lovers can get a take away crowler of beer fairly easily. It is not so widespread in the UK, although there is evidence that some breweries are catching on. Abbeydale Brewery announced the arrival of a crowler machine, as have Brewdog as well as Camden Town Brewery.

I just get the feeling that the crowler will take a long time to catch on in the UK, which is a shame. The cost to supply and sell this system in the UK may be too much. Plus the culture of purchasing beer to go is not as popular in the UK.

Although having said that, I think it is becoming more popular. Especially with the amount of craft breweries popping up all the time. I just think the UK take longer to embrace an idea, making it a longer journey to popularity.

It is hard to tell if the crowler will catch on to the extent it has in the US. It will either fail before it has even gained much ground, through expense or lack of interest. Or gradually build in popularity over several years.

Personally I love the idea of a crowler system in every bar across the land. It would be great to order one to take home, so convenient. Especially if you try a new beer and love it, just order a crowler to go and you take that beer home with you.

I guess the argument might be that you just buy the beer in cans from a store. That way you get smaller cans that can be consumed one at a time. The crowler idea may just be seen as a novelty in the UK, however I would like to see it take off.

I am yet to see the option available, maybe I need to travel to more breweries and tap rooms. What about you, if you have seen crowlers available or had one yourself. Then share your experience below, share your thoughts on crowlers, and indeed growlers. Hopefully it is going on more than I realise.