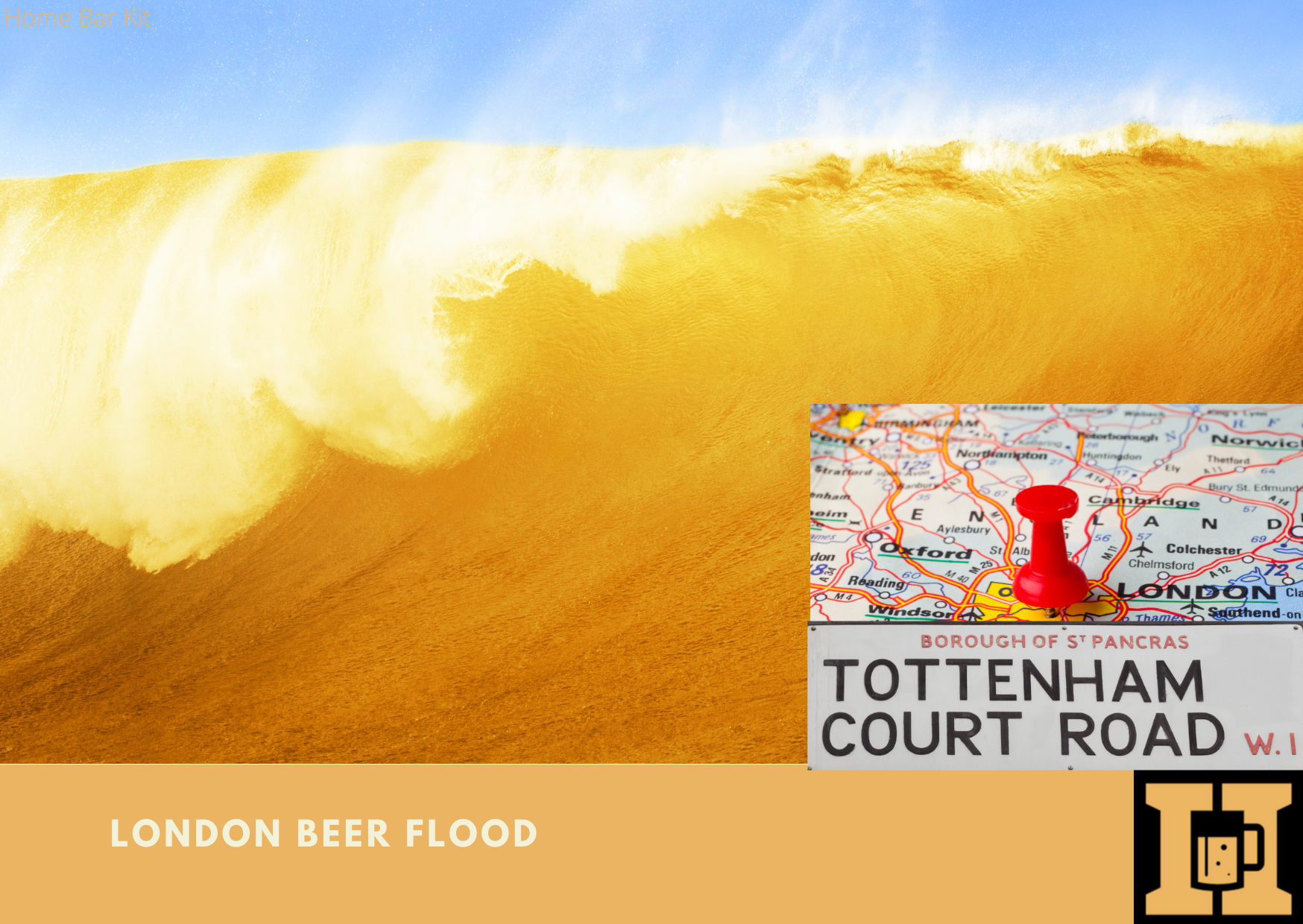 Can you imagine the city of London flooding with beer? It just isn’t going to happen, right? Well it did, but not in the way it can come across. In fact the London beer flood is a dreadful tragedy that London did suffer in 1814. As a result eight people lost their lives. So is this the worst beer accident of all time? I guess it has to be.

It is hard to believe that the streets of London could be flooded with beer. Some of the titles that cover this awful disaster do lend themselves to London being flooded with beer. However although it was a terrible accident, with terrible consequences, London did not flood with beer.

Is This The Worst Beer Accident Of All Time? London Beer Flood

It is known as The London Beer Flood, but it only affected a very small part of London. A small area was awash with beer, which had deadly consequences, killing eight people. It was caused by a giant beer vat failing and flooding the area around the brewery. The force of the beer blasted through walls and flooded nearby houses and cellars. This is the worst beer accident of all time, or is that the Baldock Beer Disaster?

Surely this couldn’t happen twice in history could it?

What Is The Baldock Beer Disaster?

In 1904 at Simpsons brewery in the town of Baldock, Hertfordshire, England another beer disaster happened. The floor of a beer storage room gave way and three hundred barrels of beer descended. These barrels crashed through three floors crushing eight workers to a fatal end. Furthermore the contents of the barrels drowned another five people and a dog. Leaving at least another fifteen injured.

The flood of beer that reached the surrounding streets also destroyed three houses. This led to the brewery eventually going bankrupt and the building being demolished some years later.

A definite beer disaster, however it never actually happened. A complete hoax that emulates the London beer flood. The only truth is the brewery did close and was demolished. But it was sold in 1954 to Greene King, then closed in 1965 and demolished in 1968.

This leaves the London Beer Flood as the worst beer accident of all time.

What Caused The London Beer Flood Of 1814?

During this period in London the most popular drink was Porter and it was produced on a large scale. This led to giant sized beer vats being introduced. The largest being some 25 foot (7.6M) high and nearly 200 feet (60M) in diameter. It was said to hold around 20,000 barrels of beer.

The Horse Shoe brewery stood on the corner of Tottenham Court Road and Oxford Street, now the home of the Dominion Theatre. It was owned by Meux & Co with Sir Henry Meux at its helm. It was one of the largest breweries in London at the time and owner of some of the largest beer vats.

These huge beer vats were together by massive iron hoops. The vat in question was some 22 feet (6.7M) in height and held around 18,000 barrels. On 17th October 1814 George Crick a storehouse clerk noticed that one of the iron bands securing the vat had slipped.

Although it would need replacing, it did not alarm Crick as this happened from time to time. He notified his supervisor with a report for repair. Nothing ever came of a securing iron hoop slipping. Until now, about an hour later the vat failed. The contents gushed and the forced released the valve from another vat close by, which also released its contents.

The vast amount of porter ale crushed the back wall of the brewery and slammed into the neighbourhood. It was reported that a wave reaching 15 feet (4.5M) swept the streets, crashing into houses and doing untold damage.

You can imagine the carnage, which ending in the death of several citizens.

How Many Died In The London Beer Flood?

The wave of porter burst into New Street directly behind the brewery demolishing two houses and damaging a number of others. A young 4 year old girl Hannah Bamfield in one of the destroyed houses lost her life. In the second house a wake was in progress for a two year old boy who had passed the previous day. His mother Anne Saville along with Catherine Butler, Elizabeth Smith, Mary Mulvey and her young son Thomas Murry all lost their lives.

A 3 year old Sarah Bates was later found dead in another house the was damaged. A neighbouring Tavern, the Tavistock Arms also suffered a fatality. A young 14 year old girl Eleanor Cooper was washing pots in the pubs yard when the brewery wall collapsed. She was buried under the immense rubble and found later.

A number of other people were injured including a few brewery workers. However the death toll numbered to eight people, all of which were women and children. The men were all still at work when it happened around 4.30 pm.

A tragic incident that seemed to go without penalty. However it did see the eventual end of the vast wooden beer vats.

So did Meux & Co get punished for the failing of their giant beer storage vat?

No, but they did a lose lot of beer and copped a fair amount of damages to their property. However the damage to the surrounding buildings, injuries suffered and the loss of lives went without penalty. No compensation and nothing to answer for.

The inquest into the incident saw the coroner and the jury record a verdict of an act of God. Those outside the brewery that suffered injury. The loved ones of those who lost their lives and those that lost their houses received nothing. No compensation from Meux & Co and no compensation from the government.

The brewery lost a lot of porter and suffered damage to the building as well as losing beer storage vats. The cost of the damages came to a hefty £23,000 which took them close to bankruptcy. However they were awarded over £7,000 for the loss of all that beer.

In 1914 Meux & Co bought the Nine Elms Brewery in Wandsworth, London. And in 1921 moved all production to this site, closing the Horse Shoe Brewery. It was later demolished and the Dominion Theatre built on the site.

As you can imagine with such a disaster, there were many rumours that circle at the time. Or perhaps were added on to the story in time. We have a tendency to dramatize a story for better impact.

One such story was of crowds of people drinking the free flowing porter. Collecting it in what ever vessel they could get their hands on. Mass intoxication swept through the area, with a death by alcohol poisoning.

Another story was of brewery workers charging people to view the remains of the beer vats that failed. The families of those that died displaying their bodies to the public for financial gain. One such story included the floor in a house collapsing under the weight of those paying to see the body of one that died.

There were no such reports at the time to confirm these stories either officially or otherwise.

Unlike the Baldock Beer Disaster, the London Beer Flood was real. A very real and horrible incident that wrecked havoc through the streets of St Giles Rookery. A poor overcrowded area that the brewery sat within.

Though some may joke of beer flowing through the streets, and what a way that would be to go. It is hard to imagine the havoc caused by this, how a river of beer could destroy houses and take lives. More than 320,000 gallons of dark beer gushing through the streets. The scene afterwards must have looked like a hurricane had passed through.

The next time you pour a glass of your favorite beer, especially if it happens to be a porter. salute the people of St Giles Rookery. Remember those that fell in the great London beer flood.