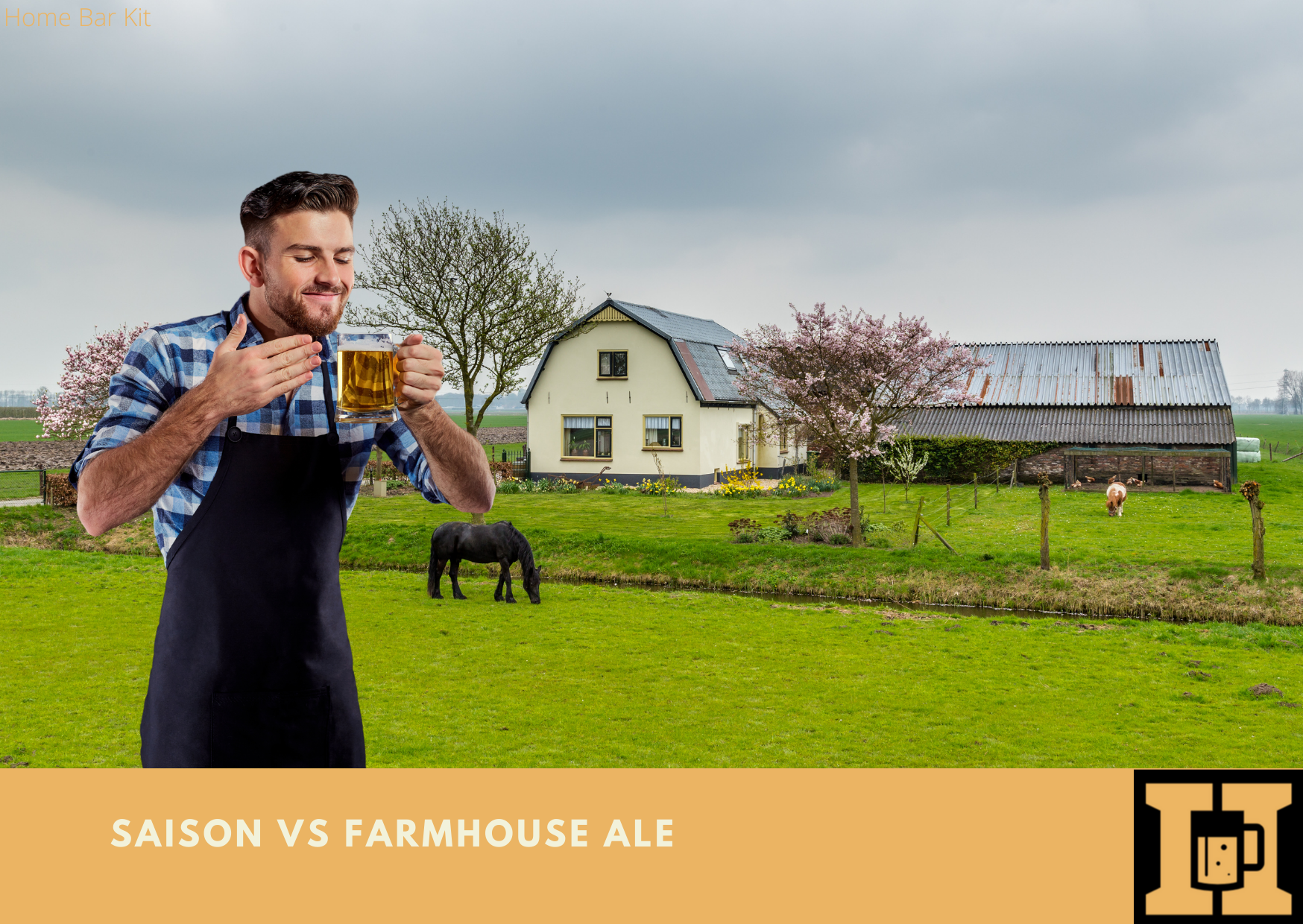 There are many different styles of beers from lager through to porter. Just like the Porter Vs Stout debate, it can get a little confusing. Especially when breweries use different names to refer to the same thing. These beer styles can have a blurred edge with either slight or considerable variations. A Saison or Farmhouse ale is an example of this confusion. So what’s the difference? Saison Vs Farmhouse Ale.

Is Saison a farmhouse ale? Is a farmhouse ale a Saison? Or are they completely different? Maybe they are the same thing, whatever they are, we need to take a closer look.

Saison is traditionally a farmhouse ale originating in Belgium and brewed on the farm for seasonal farm workers. This means that a farmhouse ale can be a Saison, but it can also be another beer too. Any beer brewed on a farm using ingredients from that farm is a farmhouse beer. Consequently they are the same, whilst being different.

Well that’s cleared that up.

What Is A Saison Beer?

Originally a Saison beer was a farmhouse beer. It derived from Wallonia an area of Belgium that borders France. A French speaking area, hence why it is called Saison, which translates as season.

A beer that was brewed on the farm in the winter months and stored for consumption in the summer. The aim of the beer was to satisfy the seasonal farm workers in the hot summer months. A thirst quenching refreshing drink that would keep them going.

It does sound a bit weird to think a farmer would brew beer to serve his workers during the long hot days in summer. However with the option of potable water a slim one because of infectious agents, beer was the answer. And it was brewed to be fairly low in alcohol for obvious reasons.

The recipe would vary from farm to farm depending on what they were growing or had to hand. This saw spices and herbs find there way into the brew. They were also unfiltered giving them the slight hazy appearance.

So a Saison beer is a farmhouse beer.

What Is A Farmhouse Beer?

Actual farmhouse brewing is not that common although some do still exist. But many breweries that have nothing to do with farms produce Saison’s and other farmhouse ales. Can they truly be called farmhouse ales?

Technically no, for a beer to be a true farmhouse beer would mean it is brewed on a farm. Brewed using ingredients from the farm as well as locally sourced. So modern day Saison’s or at least the majority are not farmhouse ales. And nor are other farmhouse ales that are made in large breweries.

Instead they are brewed in the style of a Saison or farmhouse beer. Using similar ingredients and similar processes. Just like IPA’s there is a vast range of other ingredients played around with to produce new exciting beers.

There is no real difference between a Saison and a farmhouse ale. Except that a Saison is a farmhouse ale, where as not all farmhouse ales are a Saison. Most of the beers that you will find with the words Saison or Farmhouse ale on the label are not authentic.

However there are some real farmhouse breweries around the world producing all kinds of beer. Old Farmhouse Brewery in St David’s Wales is one example, using their own well water and malting barley.

Hill Farmstead Brewery in Vermont, US is another one that operates from a farm producing beer. Jester King Brewery in Austin, US is also a farm brewery.

These are just a few, I am not sure how many real farmhouse breweries there are around the world. My guess is that it is a very small percentage up against the thousands of other breweries. A lot of which brew farmhouse ale, just not in the traditional sense.

Initially these beers were brewed for farm workers during the hot summer months. They needed to be refreshing and thirst quenching. At the same time they could not be too strong and had to survive storage.

The result is a pale ale that is a hoppy, fruity fresh beer. They can be peppery or spicy depending on what was added during brewing.

Modern day Saison’s are a little bit more experimental as you would expect and some are pretty strong too. You may find an array of herbs and spices make there way into the brewing of Saison. This is what makes them so interesting, giving a different kind of edge to the beer.

Saison normally is a pale orange, however there are many lighter and darker ones today. Traditionally they were also hazy, but I am sure there are some with more clarity now. It’s a beer to try.

Although we can all go to the store and buy a farmhouse ale, remember it may not be a real one. However it will be based on the real style of beer. I recently bought one myself, La Goudale which I must say was pretty good. It will appear in Rate My Beer very soon.

Breweries are doing a good job bringing us new and exciting beers all the time. Their take on Saison’s and other farmhouse ales are worth trying. I will certainly be indulging in these styles of beer, they do make a refreshing change.

Next time you fancy a beer, why not try a farmhouse style beer, you may like the refreshing difference. Then share your thoughts below.