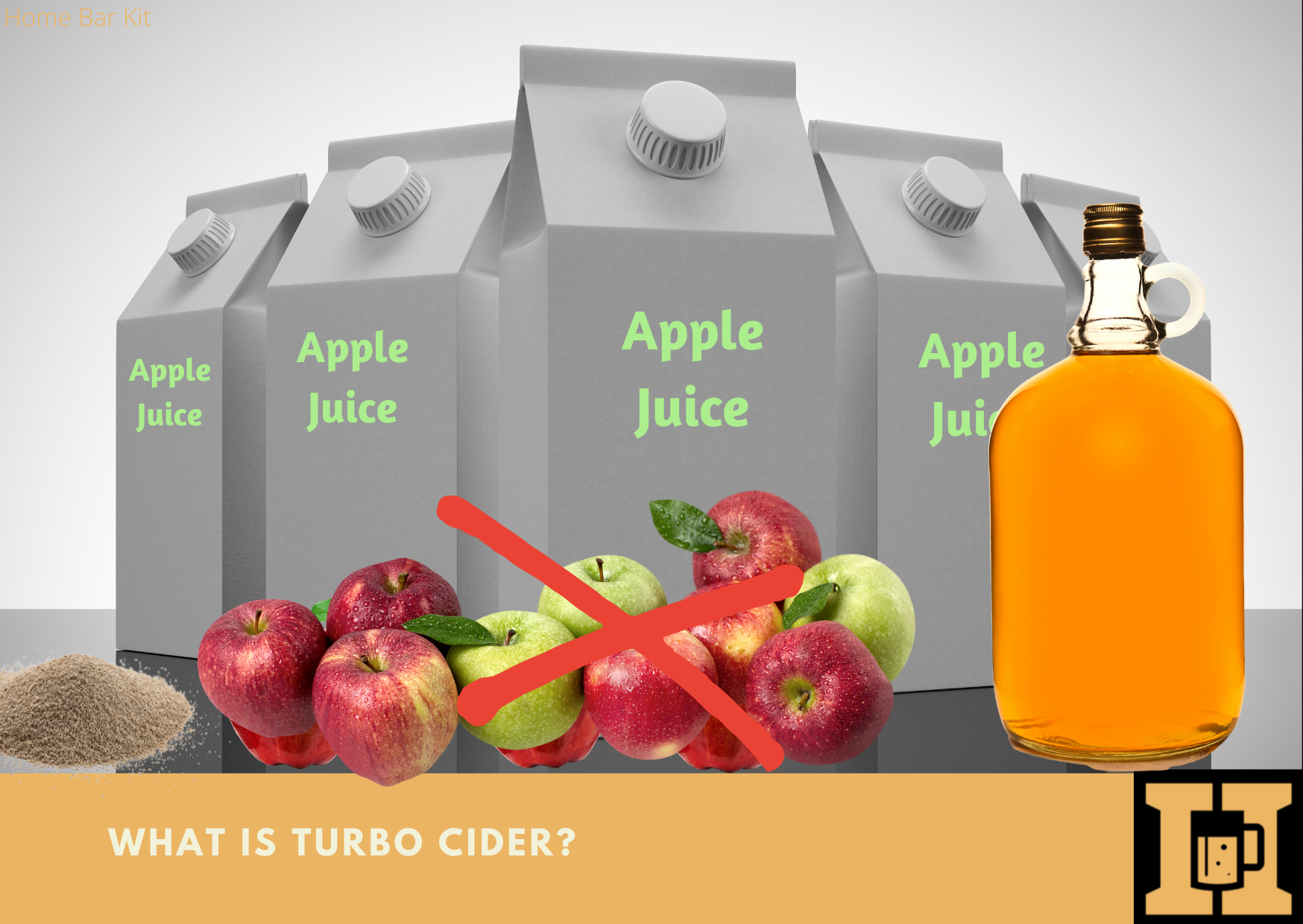 A nice refreshing glass of cider is a great drink on a hot day, or any other time too. However brewing your own cider can be somewhat laborious. Picking, chopping and extracting the juice from a pile of apples is a big task. But there is an alternative and its called turbo cider. So what is turbo cider?

Imagine brewing cider without having to pick, chop and extract the juice from all those apples. It would be so much easier and no where near as time consuming. But how is it done?

What Is Turbo Cider?

Turbo cider is a quick easy way to make your own cider. The cider is made with apple juice bought from a store. This cuts down the labour element hugely and the cider is mixed and ready to ferment in a matter of minutes. All that’s needed is a demi john, 4.5L of apple juice and some yeast. Ferment for 7 – 10 days and it is ready to bottle. That is turbo cider.

That is the basics of brewing turbo cider. Surely it can’t be that easy?

Is Turbo Cider Any Good?

It really is that easy, but you may not get the same quality of cider that you would get from fresh apples. Some might say this is a crude way of brewing cider and the results are inferior to say the least.

However many who have brewed it this way have had some good results. Also the basics have been added to with other ingredients to refine and improve the cider.

Going beyond the basics can then produce a cider to an individuals taste. Making it sweeter or stronger, and incorporating other flavors too, will refine the cider to taste.

Turbo cider is quick and easy to make, how much we do to it along the way is up to personal taste.

Not only is it quick and easy to make, it is also cheap too. Just five cartons of apple juice and some yeast, and it is done.

Start with this basic set up and see what it is like, if it is good stick with it. If not then tweak the second batch to taste. I will explain a few tweaks further on that will enhance the cider.

How Do I Make Turbo Cider?

The basic brewing process is really simple, in fact it seems too simple, yet it does produce cider. The video shows just how easy it is to make your own turbo cider.

It is actually amazing how 4.5L of cider is mixed on a tiny table in a matter of minutes.

What Do I Need To Make Turbo Cider?

This is what you need at hand to make turbo cider.

That is all you need and the process is just as simple.

It is important not to be tempted to fill the demijohn to the top with the half litre of apple juice that’s left. Room is needed at the top for the fermentation. Fill it up too much and the liquid could pass through the airlock. That will be messy.

That is it, now it is just a waiting game, but how long will it take?

How Long Does The Cider Take To Ferment?

Once it is in situ leave it for around 7 – 10 days by which time it should have stopped bubbling. Also it should have started to clear too. However it may still be a little cloudy, but can be decanted into another vessel or bottles.

At this point it can be consumed as long as you don’t mind your cider a little cloudy.

The alternative is to leave the cider another week or two so it can completely clear.

Make sure the syphon tube, container and or bottles are all sanitised. Syphon carefully so as not to disturb the sediment at the bottom of the demijohn. Try not to take any of this into your new container.

The turbo cider can now be chilled and enjoyed.

How Strong Will My Turbo Cider Be?

A basic method like this will probably produce a cider with around 4% ABV. It could be a little higher, but probably not over 5% ABV.

The use of a hydrometer at the time of brewing and at the end of fermentation will indicate the strength of the cider. It will also make sure the cider has completely finished fermenting.

Related: Do I Need A Hydrometer For Brewing?

How Can I refine My Turbo Cider?

The method I have explained to make turbo cider is the most basic. Although it will produce a cider, it may well be really dry. It might also be a little harsh too.

However if you like a sweeter version, then there are a few ways to achieve this.

Artificial sweeteners can be added instead as these are non fermentable and will sweeten the cider. However the problem is they are artificial.

Alternatively stopping further fermentation by adding Potassium Sorbate and Sodium Metabisulphate will allow sugar to be added for sweetening.

If neither of these methods float your boat, then add something sweet to the glass on pouring your cider. A little apple juice, lemonade or even sugar will sweeten your cider. Bear in mind sugar may make the cider fizz up a little, so be aware.

Another way to sweeten the cider at pouring time is to add a flavored sugar syrup.

Another way to refine turbo cider is to add other ingredients when brewing the cider. Add a 3.5L of apple juice and 1L of another flavored juice.

Cranberry, blackcurrant or strawberry will add another dimension to the cider. Raw fruit can add flavor too, as well as fruit extracts.

There are many ways to experiment with adding other flavors to the cider.

How Do I make a Stronger Cider?

As a guide to increase your cider by 1% ABV add around 10g of sugar per litre. Bear in mind this will not make it sweeter, but stronger.

The yeast will turn this sugar into alcohol, so the more sugar you add the stronger the cider.

These are the types of things that can be done to refine the cider and get it to where you want it.

Turbo cider is the easiest way to brew your own cider. There is nothing complicated about the basic method. However the more you decide to tweak it, the more involved it will become.

Making the basic cider first is a good way to know where to take it for the next batch. Hopefully the basic version will be just fine, but if not then trial and error is the name of the game.

Try different tweaks until you get it how you like it, sweeter, stronger or add other flavors too. Just remember to record the tweaks you make because if you don’t and make the perfect cider. You may not remember exactly what you did to get it that way.

Plus if you record each step it will provide a map of which direction to go for the next batch. Also little tweaks are better than drastically changing anything too much.

The main thing is to get brewing and enjoy the process. Just don’t go mad with the ABV and end up with a super strength cider, you might regret it.