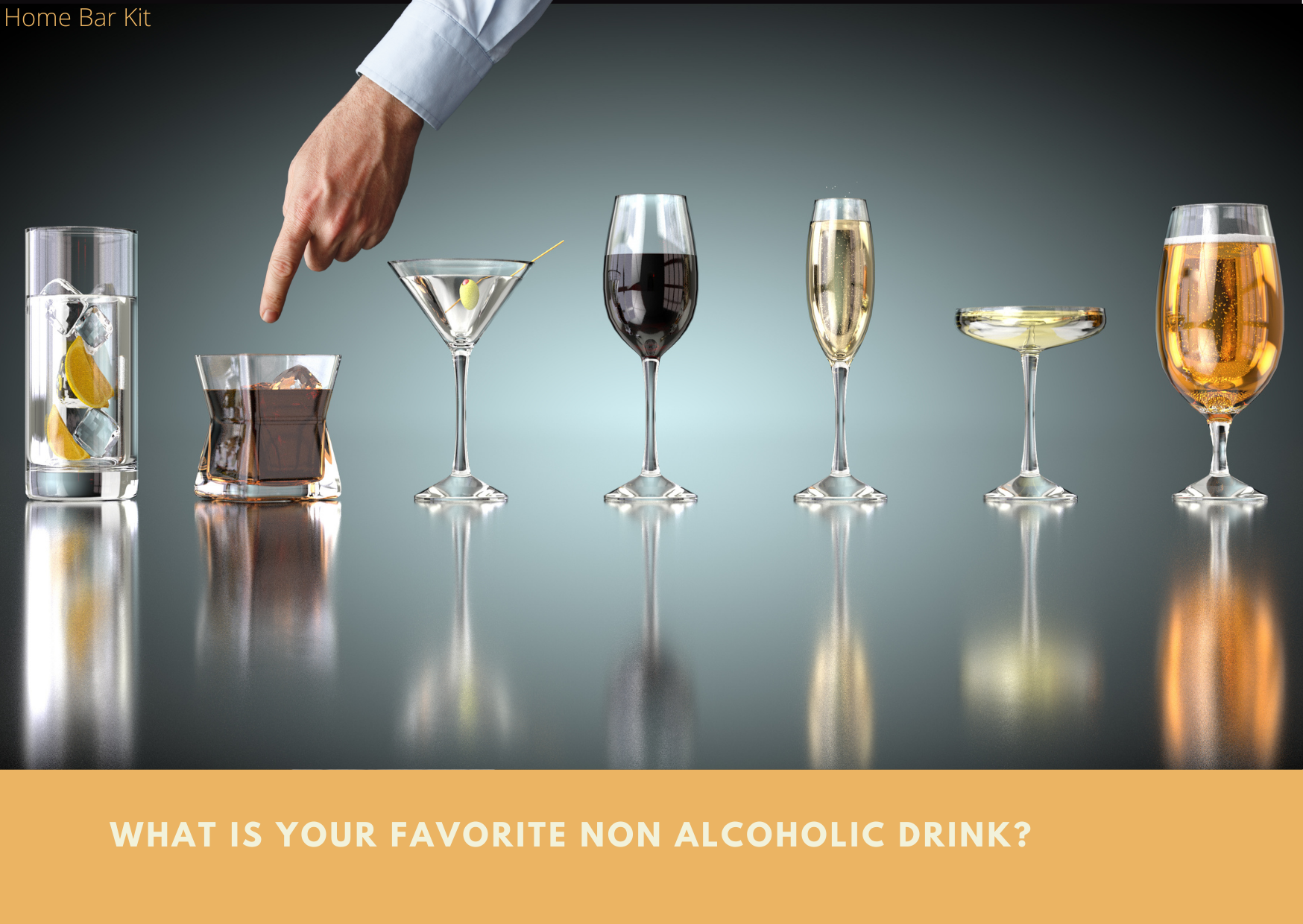 The drinks industry has seen its trends over the years, most recently the explosion of gin is one to acknowledge. Gin infused with flavors never dreamt of before saw bars with rows of different types of gin lined up behind their bars. However, it’s the turn of alcohol free drinks to take center stage and they have hit the market with a bang. So what is your favorite non alcoholic drink?

I for one have not tried many, but it is something that has to be explored. And with many drinks companies jumping in and producing alcohol free beverages, the choice is vast. Gone are the days of one lonely bottle of AF beer sitting on a fridge shelf. They are now being produced on a large scale and interest is high.

What Is Your Favorite Non Alcoholic Drink?

Like me, you may have only tipped your toes into the AF pond. However you may have immersed yourself into this new drinking scene. Consequently you may already have a favorite zero tipple like gin, vodka or whiskey. Perhaps you are a zero wine connoisseur, or enjoying the many beers on offer without the bite. Likewise we cannot forget the many cocktails that are emerging using AF spirits.

One things is for certain non alcoholic drinks have truly hit the bar scene. Similarly, they are making their way into many home bars too.

Non Alcoholic Trends In The Bar Scene Are Gaining Momentum

During the last few years a lot of things have happened, the whole world has been turned upside down. We have all been affected by a global pandemic. This hit the hospitality industry hard with many bars and restaurants closing.

However, the production of beers, spirits and wine does not seemed to have slowed down. And the production of alcohol free drinks is on the rise. So much so that there are even AF bars opening around the world.

An alcohol free bar, also known as a dry bar, or temperance bar is nothing new. The late 19th century saw a rise of AF bars spring up and many towns had a least one. Eventually their popularity declined and gradually they all disappeared.

However in England, one remained and is still in operation to this day. Fitzpatrick’s, a temperance bar in Rawtenstall, Lancashire has been quietly serving non alcoholic beverages all this time. It is said to be the only original bar of this type built in the 19th century.

But they are making a comeback, and one that could be bigger than it ever was back then.

The dry bar is making a comeback then, but this time with the back up of drinks companies. Many breweries, wine makers and distillers are emulating alcoholic drinks for AF versions. Big hitters like Heineken have their 0.0% Vol lager. Gordons have their gin in zero guise and Hardys have their AF Chardonnay. Not forgetting Cider with Kopperberg who do a variety of AF ciders.

These are just examples and not the only drinks makers that are following the zero trend. Even large craft brewers such as Brewdog and Beavertown have their range of AF beers. Whatever your tipple, you are sure to find a similar zero version.

Alcohol free bars and restaurants are popping up in the UK, the US, as well as the rest of the world. They are not just frequented by non drinkers either, those that consume alcohol are participating too.

There are some obvious advantages to drinking AF drinks, especially when going to a bar. You can take your car and drive home, instead of the expense of a taxi. No sore head in the morning if you happen to have a few more than you should. Also there must be health benefits too.

So the non alcoholic bars are here, whether they will stand the test of time is yet to be seen.

How Are Non Alcoholic Spirits Made?

A non alcoholic drink is about enjoying your favorite tipple without the alcohol. But how do they achieve this and are they any good?

First, a non alcoholic spirit can’t really be a spirit. A spirit is a strong distilled liquor such as whiskey, vodka or brandy. These contain a high volume of alcohol, which is also a flavor carrier, take out the alcohol and you lose flavor.

So how do you achieve a spirit substitute without the alcohol?

One method is to distill the product with alcohol as normal, but then remove the alcohol through a second distillation process. Or maceration in which the origin of the flavors desired are soaked in cold liquid. This can be done without the use of alcohol.

How Are Non Alcoholic Wines Made?

Some people think that non alcoholic wine is just grape juice. Although they both started out as grapes they are made differently, so AF wine is not grape juice.

Non alcoholic wine starts out as wine, it goes through the same wine making process. However at the end it will go through a process to remove the wine. Vacuum distillation is one method, in basic terms the wine is heated to evaporate the alcohol.

Reverse Osmosis is a filtering system that separates the wine, including the alcohol before putting it all back together without the alcohol. Spinning cone is another method that gently removes the alcohol from wine through a tower of upside down cones. This method is also used to reduce the alcohol level in wine, but not all of it.

Just as with spirits the alcohol gives the wine body and texture, take it out and you lose flavors, aromas and textures.

How Are Non Alcoholic Beers Made?

Non alcoholic beer is made in the same way, in other words the beer is brewed normally. Once the beer is ready, it is then stripped of its alcohol, before being filtered, carbonated and bottled.

Just like wine, beer can have its alcohol removed with similar processes as wine. Such as vacuum distillation and reverse osmosis. However there are other methods too.

Gas stripping is a method where the beer is gently heated and then water or gas such as nitrogen is passed through it. The water or gas takes the alcohol out of the beer.

Limiting Fermentation is also a way to end up with alcohol free beer. The beer is still brewed in the same way. However by limiting the amount of sugar the brewer can limit the alcohol content. The less sugar the yeast can ferment the less alcohol.

Special yeast strains can produce less alcohol. A yeast strain that doesn’t ferment maltose which is one of the main sugars produced by malted grain will result in no alcohol beer. However this can lead to a sweet beer because the sugar has not been fermented.

Stopping the fermentation can also have the desired affect. Heating or cooling the fermenting wort can slow it or stop it. Another method is to not ferment the beer, but a beer is not a beer without fermentation. But methods are used to tweak the liquid to taste and feel like beer.

Dilution is also used, a beer is brewed in the same way, at the end it is diluted with water. This will dilute it to the point of 0.5% ABV. It is then re-carbonated and packaged.

What Is The Cost Of Alcohol Free Drinks?

On the face of it we would expect alcohol free drinks to be cheaper than their alcoholic equivalents. After all there is no alcohol and no duty on them. Nevertheless, they are not always cheaper and sometimes more expensive.

How does this work?

The problem is that there is more involved with producing a non alcoholic drink. The makers are either having to prevent the presence of alcohol or taking a further step to remove it. This takes special equipment and and of course time. The process is more complex which reflex in the cost.

In short it is more expensive to produce than normal alcoholic drinks.

I am sure that the zero trend will further grow and there will be more and more inventive ways to produce it. But this could produce more and more artificial drinks, using processes that are not natural. It is clear that trying to emulate an alcoholic drink like for like is near on impossible.

Removing the alcohol will also remove body, texture, aroma and flavor. The result being a watered down version of the original. That said, just as meat substitutes have moved on, so will alcohol free drinks.

So do you have a favorite?

If you are already into AF drinks then share your thoughts below. What is your favorite non alcoholic drink? Do you prefer them to their alcoholic counterparts? Or are you averse to the AF culture? Whatever you have got, share it below.