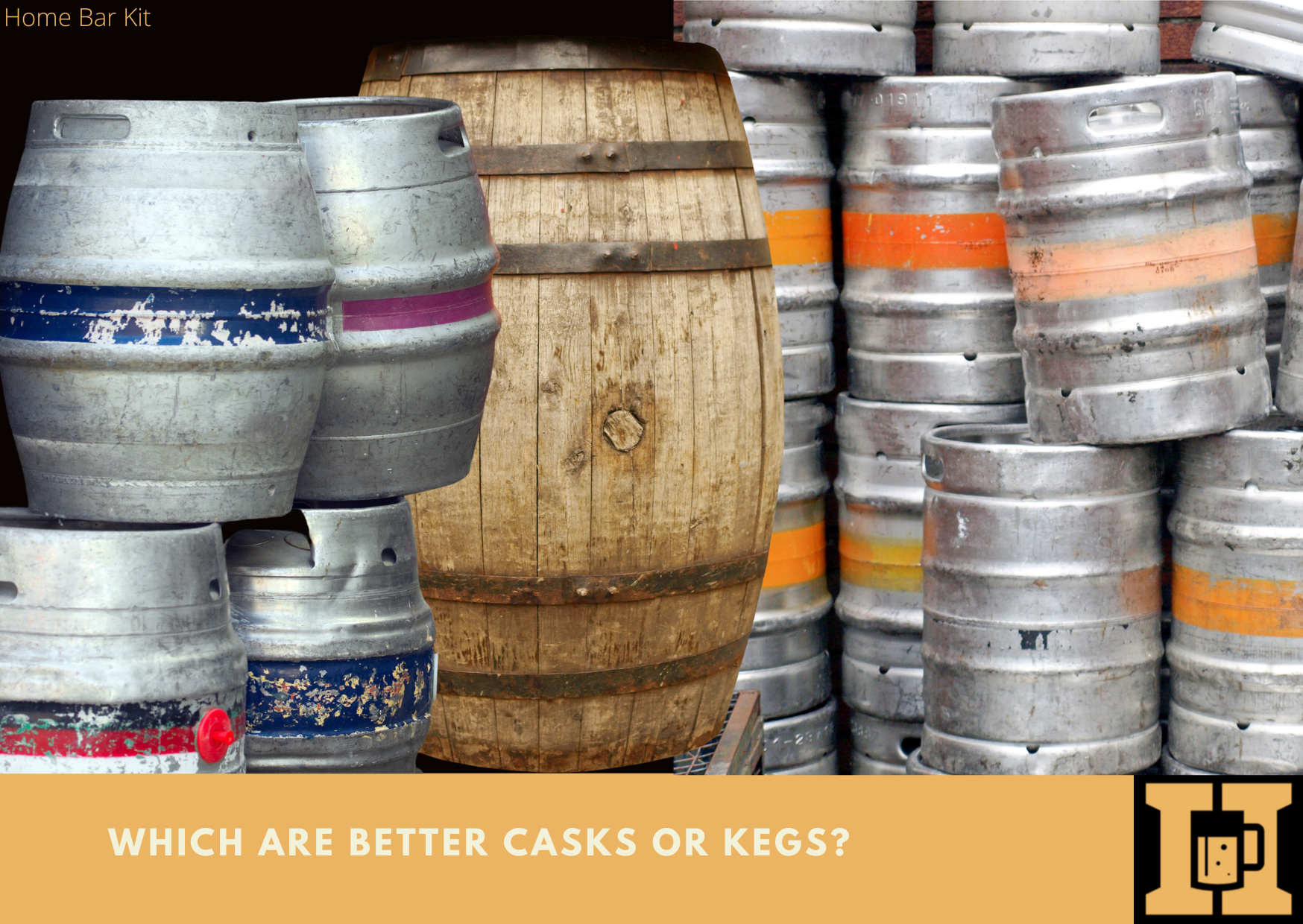 Casks and kegs are filled at a brewery to transport and store beer ready to be dispensed to the glass. Both do the same job, however there are slight differences. So which are better, casks or kegs?

Some say cask is better, while others say keg is better and the subject often comes up for debate. Passions can run high between the two camps. Whereas others enjoy both ways in which beer is stored and dispensed. In this article we will look at what makes these two containers different and which is better.

Which Are Better Casks Or Kegs?

There is not a clear winner, for me it is a draw, but it depends on what beer you like. A real ale lover is always going to prefer cask served beer. For them a room temperature beer with natural carbonation makes the cask a clear winner. On the other hand the keg is the winner for those who love a beer served colder with a bit of added fizz. Then there are those that enjoy both as the mood takes them.

They both have their well earned place on any bar top around the world.

What’s The Difference Between Cask And Keg Beer?

There are a few differences between casks and kegs. One being the shape, a cask is the traditional barrel shape with the middle being wider than the ends. A keg on the other hand has a straight body, both come in different sizes.

What goes on inside the vessel also differs, with cask normally holding beer that continues to ferment. A keg contains beer that has normally finished fermenting and ready to drink.

The dispensing methods of a cask beer as opposed to a keg beer are also different. As are the temperatures they are served at.

Casks And The Beer Within

Casks are older than kegs and traditionally made from wood housing real ales as well as other drinks like whisky and wine. They also come in metal too, but have the same barrel like shape as the wooden ones.

A cask is normally used for housing beer that is live, unfiltered and unpasteurised. So the yeast is still active and the secondary fermentation actually happens in the cask.

This means that more care is needed when the cask is delivered to the place it will be dispensed. The cask needs time to settle and can’t be connected to a pump and drawn straight away. The temperature of the cellar needs to be right too around 11°C to 13°C (52°F – 55°F).

The cask must be secured properly on a rack on its side and a tap fitted as well as a vent to allow gas to escape.

A cask beer is drawn to the glass via a manual beer pump and has no added gas. The carbonation is natural from the fermentation process. As the beer is drawn oxygen gets into the cask and the life of the beer is limited. It is said a cask of beer would not last much beyond three days once it is opened.

As long as a cask has been properly treated at the premises it is served. Then it will deliver a great pint of beer.

Kegs And The Beer Within

Kegs are straight in design and made from metal, they have been around from about the 1960’s. Just like casks, kegs can house other drinks too.

Normally a keg beer is filtered and pasteurised, meaning the are no active ingredients in the beer. The secondary fermentation has already been carried out at the brewery.

So a keg beer is ready to be connected and poured as soon as it has been delivered. A keg is stored upright and has one opening. A coupler is attached to this opening which incorporates two tubes, one is the beer line and the other the air line.

This system means no oxygen enters the keg and the beer has a longer life within the keg. The gas also adds carbonation the beer too.

The kegs are either stored cold or the beer goes through a cooler before it hits the beer tap.

What Size Are Casks And Kegs?

Both casks and kegs do come in different size. This helps a pub or bar to get the right amount of beer for the consumption in their premises.

A quieter pub may not get through the same amount of beer than a really busy pub (obvious). This is particularly important with cask beer because of the limited life of the beer once opened.

There are a number of sizes of casks and many of them would not be seen in a pub cellar. The larger ones would be used to store and mature whisky, brandy or wine.

This is the biggest cask and holds 252 imperial gallons, which is around 1145 litres and over 2000 pints. It would have to an extremely busy pub to hold one of these monster casks.

A butt cask is half the size of a tun cask and is used for maturing wine and sherry. Again way to big for a pub or bar.

A hogshead is probably one of the most well known casks and is a quarter of a tun in size. It is related to beer, cider, whisky and even tobacco.

A barrel is an eighth of a tun and associated with wine. However just like all the cask it can be used to store and mature any alcoholic beverage.

The kilderkin is half the size of a barrel and the largest container used and delivered from breweries to pubs. Although these are not as common as they used to be and now pretty rare.

A firkin is half the size of a Kilderkin and quarter the size of a barrel. These are the main cask used by breweries and delivered to pubs and bars.

A pin is the smallest of casks and as you may have guessed is half the size of a firkin. Ideal for a smaller outlet and used for outdoor events.

They also come in a plastic version known as a polypin used by breweries for off sales. Home brewers also use these polypins for their beer.

Like the casks the keg comes in different sizes. However there are not quite so many sizes to choose from. Each size is suitable for home use and just depends on how much beer you drink over time or how much space there is to accommodate a keg.

A half barrel keg as the name suggests is half the size of a barrel, which holds 248 pints. The half barrel keg holds 124 pints and is the largest of kegs and most used commercially.

Although it can be used for home bars too and will fit most home kegerators.

A quarter barrel keg is half the size of a half barrel and will hold 62 pints. Also known as a stubby or pony keg it is possible to get the short stubby version or a taller slim version.

As the name suggests this holds a sixth the amount of a full barrel, which is 42 pints. Ideal for outlets that don’t have the space to hold the larger kegs or don’t sell as much product.

This keg which is better known as the corny keg is just a little smaller than the sixth keg. A corny keg will hold 40 pints and is ideal for home bar use, very popular with home brewers. A great way to get beer on tap at home.

A mini keg is a popular size for home bars and the type that fit into small draft beer systems. These can be purchased from breweries as well as many supermarkets too.

A min keg holds around 10 pints, so is ideal for a casual home drinker. However they do not last long in a party situation.

Final Thoughts On Casks Or Kegs

So it is not about which is better a cask of a keg. It is more about personal choice, what kind of beer we like and in my case what beer I am in the mood for.

I think it should be celebrated that we have the choice and both cask and keg beers are readily available. Take your pick and enjoy the beer you love (responsibly of course).