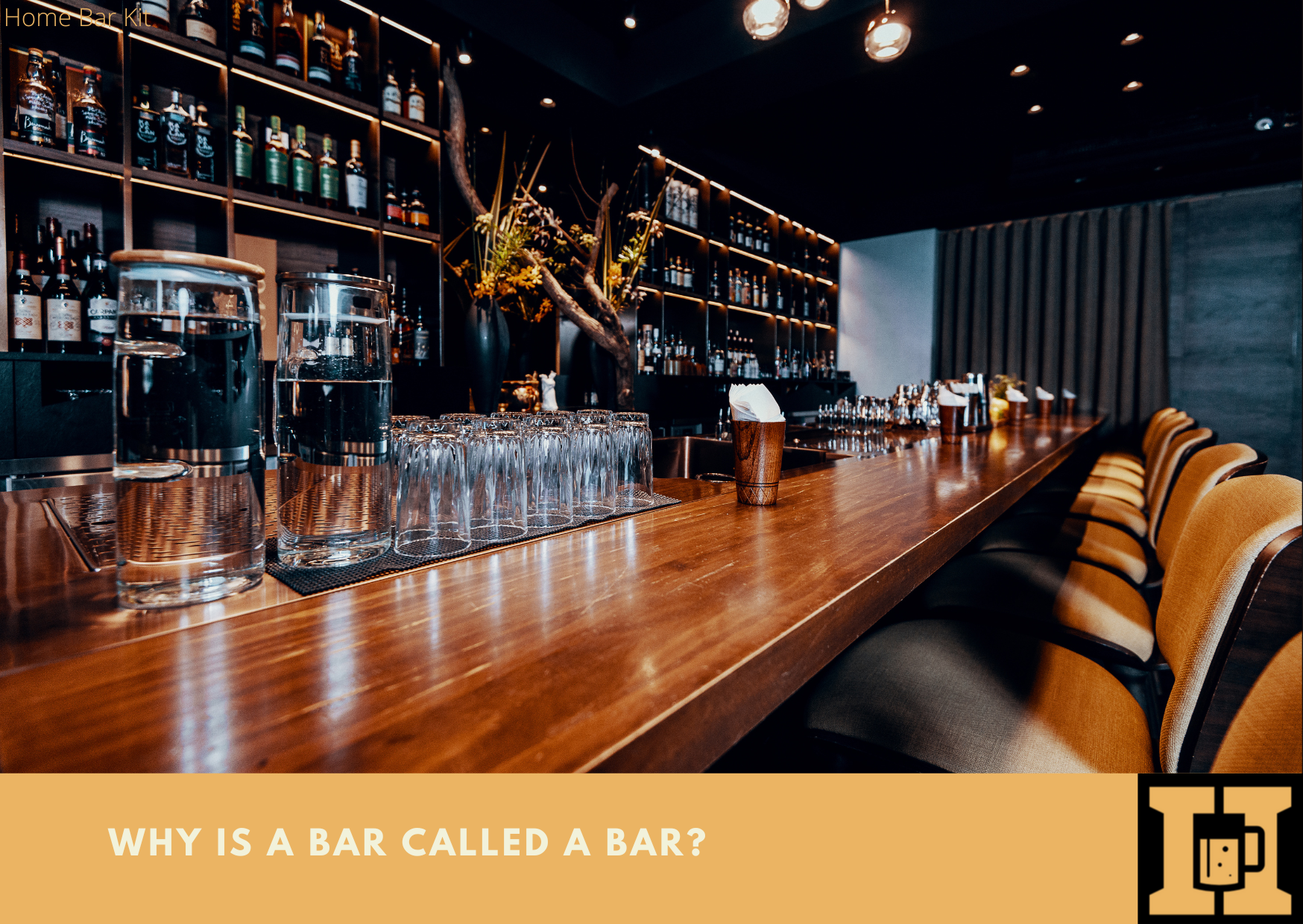 When I say bar I mean the counter that we stand at to order a drink in the pub. Why is it not referred to as a counter? So why is a bar called a bar?

Of course some places that have a bar in them are also called a bar and not a pub. Some restaurants have bars, football stadiums have bars, we even use to have milk bars. There are lots of theories to the origin of the counter becoming known as a bar.

Why Is A Bar Called A Bar?

I tend to lean towards the first theory as the most logical and the most widely accepted one too. However knowing for sure would be a good talking point next time we are down the pub, or at our own home bar.

What Is The difference Between A Pub And A Bar?

A tavern, saloon, ale house, pub or bar, they all serve alcohol, but what is the difference between them?

It is all just names used throughout history that mean the same thing.

There are of course other meanings for some of these. A saloon can also be a car or a large cabin on a ship. A bar can be a unit of pressure, being prohibited from somewhere (like a pub) or just a long narrow piece of metal.

Which is where all this started.

These days when we think about going out to meet friends for a drink, we think either pub or bar.

A pub is normally seen as a complete building in which there is one or more bars. A bar on the other hand is seen as one unit within a building. A bar could be a shop front within a high street, where as the pub would be its own building on the same street.

We could go into old thoughts of a pub selling beer, wine and food. Whereas as bar would sell hard liquor and cocktails.

However things have changed and whether it is a pub or bar, they serve whatever they choose.

The Metal Bar Along The Bar

An ale house or tavern would be a counter where drinks were served. The rest of the room had tables and chairs for the patrons to sit and enjoy their drinks.

At some point and I can’t pinpoint the exact time and date, the bar started to get used for consuming.

This is my theory.

It probably happened by accident, a customer orders a drink and instead of taking a seat, stays at the counter. They obviously had to stand as there were no chairs tall enough to sit at the counter.

It obviously caught on an with customers standing at the counter. The savvy Inn keeper gets the local furniture maker to make some tall chairs. The bar stool is born.

Now the customers can sit at the counter and enjoy the ale. But their feet are just dangling, why not fit a bar along the counter for our feet to rest on.

Hey presto, the bar is born.

The Counter Becomes The Bar

Over time the long bar running the length of the counter became the reference to the counter that serves the drinks.

And over more time it became the reference for the actual premises that sells the drink. A simple footrest has become the whole bar.

Not all pubs and bars have the long footrest running along the bar. However they are still in many drinking holes around the world.

There are even long bars that run along the top of the counter too, but they are for a different day.

It is a logical theory of why a counter became known as the bar.

The Bars That Secure The Liquor

The second theory is going way back in time when a tavern would be solely run by one person. If that person had to leave the counter unattended for whatever reason, they needed to protect the beer and liquor.

Apparently there would be a set of iron bars that were suspended from the ceiling over the counter. These bars could be lowered when the bar was unattended and protect the stock.

Can it be that this set of bars used to secure the counter are the reason why the counter became known as the bar?

It is feasible of course, but I am still going with the footrest that runs the length of the bar.

The Counter Is A Barrier

The third theory is that the counter is the barrier between the bartender and the customer, hence the name bar.

This comes from and old French word ‘Barre’ which also relates to the word ‘Barrier’.

Ballet dancers use a Barre during exercises, the horizontal bar that is around waist height.

So could it be that the counter in a pub refers to the barrier between the bartender and the customer. Over time this has been shortened to the bar.

Which is just as well because an establishment that sells drinks would sound odd if it was called a barrier.

Again a feasible theory, but I am still with the first theory of the footrest.

Another theory which has no substance to it at all is that bar is an abbreviation of ‘beer and alcohol room’. I am not buying that one.

Like I said, while they all have some logic behind them, I see the long footrest as being the most probable.

How about you, which one would you go with? Share your thoughts below and let us know which one and why. Or if you know the real reason with some facts to back it up, then please do share.