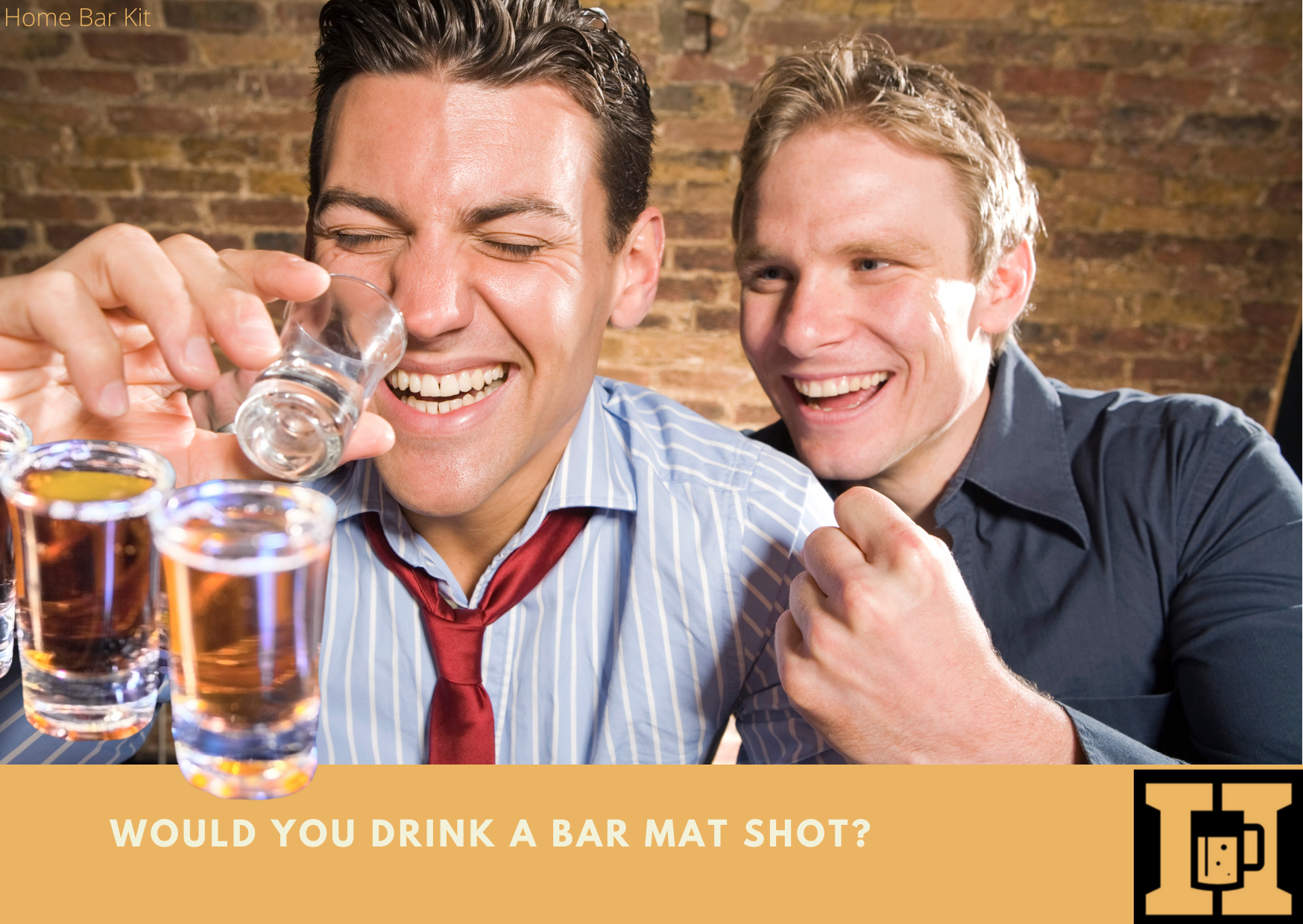 It’s all about the fun factor, a few drinks with friends in a bar and the shots start flowing. This can end up bad enough. But when someone says to you ‘would you drink a bar mat shot’, what are you going to say? My advice is to run and don’t look back.

Before I get into the bar mat shot, I would just like to apologise for this post. It is nasty and gross and something I suggest you never do. Think of it as a post about what not to do when you are enjoying a drink with friends.

Would You Drink A Bar Mat Shot?

I would hope the answer to that question is a big fat no. Why would you drink a bar mat shot? After all it’s just nasty. You don’t know what you are drinking, likewise you don’t know what else could be in your drink. Therefore never even consider it, turn it down flat and walk away. The answer to the question is ‘no I would never drink a bar mat shot, but thanks for asking’.

It really is a pretty horrid thing to drink. However there are other disgusting drink pranks too, some of which I will touch on later.

What Is A Bar Mat Shot?

Firstly the bar mat is that rubber or silicone mat on the bar top that your bartender will pour and mix drinks on. It is design to accommodate spills so the bar doesn’t get awash with liquid.

The mat has a reservoir that is filled with prongs to allow liquid to accumulate but the surface to stay free of access liquid. They do the job they are designed for well. However like a lot of things are open to interpretation by the minds of pranksters.

The bar mat should be emptied regularly and rinsed. The end of a busy day, they should be thoroughly cleaned for the next day.

A bar mat shot is when the contents of the bar mat is poured into a shot glass and some unfortunate person drinks that shot.

Think of what is in the shot glass. A mixture of drinks that have been recently mixed. This could be several liquors, juices, soda’s or beer. However on top of that there could be nasties like fruit flies and an array of bacteria.

It wouldn’t be my choice of drink.

What Is A Bar Mat Shot Called?

Obviously it is called a bar mat shot, but there are plenty of nicknames for this horrid drink.

Jersey Turnpike, gorilla fart, sweaty bartender, dirty cow, oily doily, secret shot or grey snail. There are probably many more including what I would name it ‘Sloppy Shot’. Because that is what you are drinking a shot of the slops.

You just don’t know what you are getting. But I guess it is a surprise and every bar mat shot is unique.

Why Would Anyone Drink A Bar Mat Shot?

Like I said at the beginning, when a group of friends go out for a drink things can sometimes get messy. The shots start to circulate, and then some bright spark has a light bulb moment.

How about a bar mat shot.

Other times it might be introduced for a dare, this always ends up badly. A hen/stag or bachelorette/bachelor party may get the bar mat shot featured. Birthday celebrations, a forfeit or the loss of a bet (like the video) might instigate the bar mat shot.

There are many situations where it could happen, the trick is to not let it happen. Or get out quick if it does happen.

So the bar mat shot is a pretty horrible drinking practice and one that could make us ill. However there are other so called drinking games that are just as rank.

I have seen this one done a few times, and although I can’t say for certain, I am pretty sure I haven’t done it.

Underneath the draught taps at a bar there are what I know as drip trays. They do exactly what you would think. They collect all the drips from the beer taps. If a beer is a bit lively and the bartender has to let some beer out, it goes in the drip tray.

There are normally several beer taps behind a bar. So a drip tray drink is the collection of all the drip trays poured into a pint glass.

This is obviously a mixture of several types of beer, which could be stout, lager, bitter and cider. Imagine that lot combined in one glass, it makes for a lovely drink.

Although the drip trays should be clean at the start of the day, and rinsed out several times during service. The beer sitting in them could have been sitting there for a while, it doesn’t bear thinking about.

This is similar to a bar mat shot, just a little more disgusting. Some bars also have beer cloths on the bar, these are for customers to place their drinks on. It stops the condensation on the outside of glasses pooling on the bar top. Or soaks up any spillages from all drinks.

Obviously they become saturated after a while and have to be changed for fresh ones.

Hold on a minute don’t throw that in the wash just yet, we don’t want to waste all that lovely drink.

Wring it out into a glass and you have a drink to be consumed by some crazy fool.

Just to make it more interesting, sometimes the bar is mopped up of any spillages before the wringing happens.

How disgusting, would you drink a beer cloth drink? No thank you.

I have seen this one performed at a wedding, organised by the DJ.

The pour person who is drinking now drinks through the sock.

Oh no please stop it.

Now that is pretty disgusting, and no I haven’t tried it and will not be trying it, like ever.

Equally disgusting as the sock is to consume a drink from a shoe. Pour the drink in a shoe and drink away.

This is not a new ritual, it does go back in history and it is said to be a popular Australian prank. In fact in 2016 the Aussie F1 driver Daniel Ricciardo filled his boot with Champagne on the German Grand Prix podium and drank it.

Since then he has pranked several of his fellow competitors, included fellow Aussie Mark Webber into doing the same.

Just think they have done a few hours of racing in those boots, hot sweaty foot juice combined with Champagne.

Now that is disgusting.

So now you know what a bar mat shot is, would you drink one?

Actually would you drink any of the drinking pranks I have included here?

I hope not, but whatever floats your boat, that’s fine. You have to admit though, they are pretty disgusting drinking games. Apart from the health aspect, they can’t taste too good.

I know there will be more, I have probably forgotten a few myself. However why not share your drinking games below. Could they be worse than this collection of horrid drinking stunts?

Don’t get any ideas about pranking your friends at your home bar. This wasn’t supposed to encourage you, your pour guests.