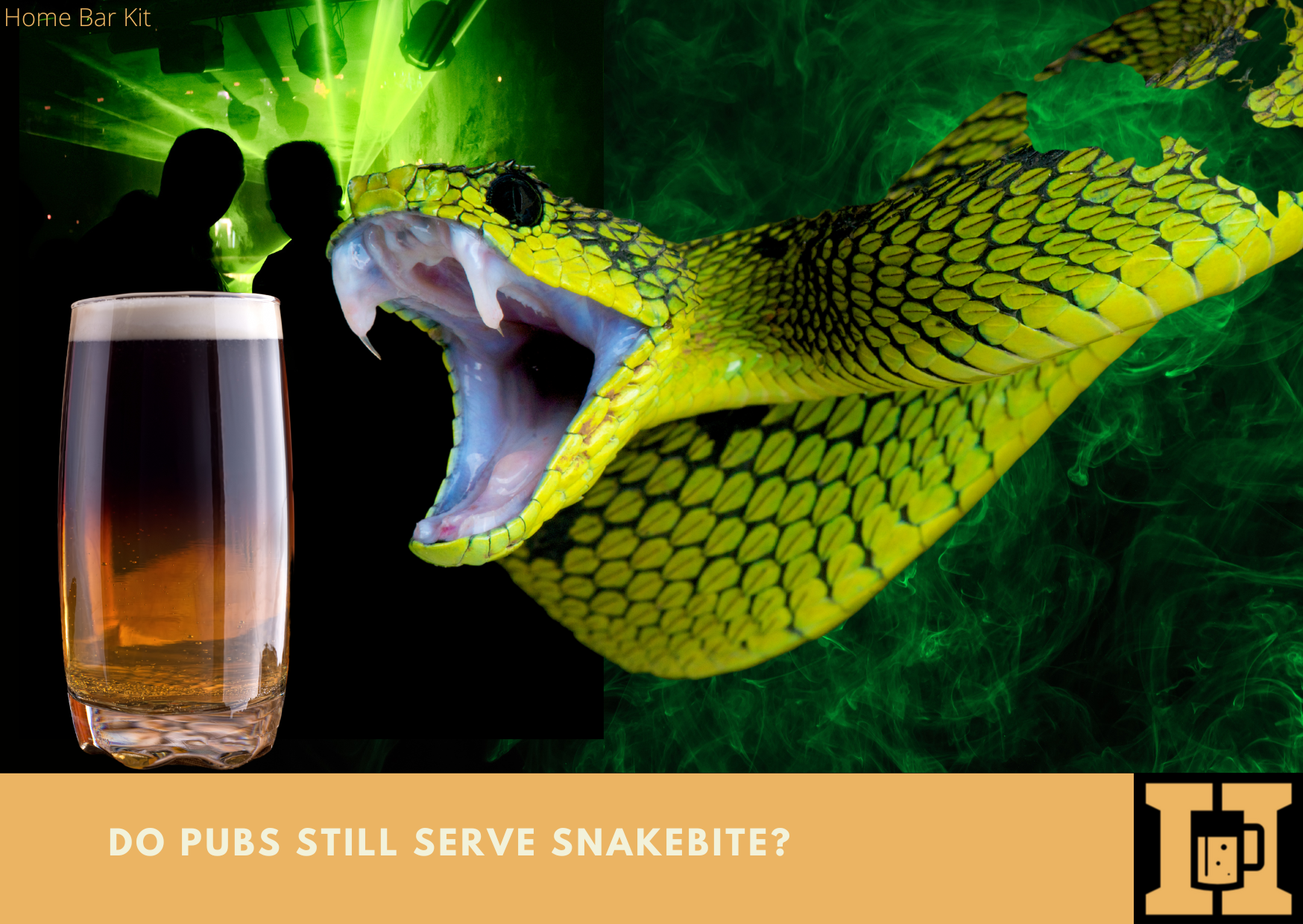 There are a lot of myths about the drink known as Snakebite. With a name like that you tend to think it is going to be a lethal drink. But is it really that potent as many believe it is? And do pubs still serve snakebite?

Snakebite was a popular drink in the 1980’s in the UK and consisted of just two alcoholic drinks mixed together. However over the years there have been many variations of this drink. Along with those variations came different names too. The original snakebite evolve into many other drinks.

The answer is yes and no, it depends on the pub, or the publican. One of the myths about snakebite is that it is illegal to serve in a pub. However this is not true, although it seems to be served by discretion of the publican. Some pubs will serve it, others won’t. Snakebite does have a certain reputation, which is why some pubs will not serve it.

Does the snakebite deserve its reputation?

In this article we will find out if it really does bite you.

What Is A Snakebite?

The original snakebite was simply cider and lager mixed in equal measures in a pint glass. The fruitiness of the cider mixed with the crisp fizzy lager made for a pretty cool drink.

In the early 80’s in London it was readily served over the bar in any pub, just like light and bitter. I never got refused a snakebite, it was a popular drink. The bartender would pour cider first to halfway, and then top up with lager, happy days.

It did go down rather easily which meant it was easy to consume a lot of it. This could have something to do with why it gained a reputation as a dangerous drink. Also maybe why it became known as snakebite too.

Why Has Snakebite Got A Bad Reputation?

Like I said it is easy to drink, so there are two sides to its bad reputation, one leading to the other in many cases.

Being so easy to drink meant you could get carried away with how quickly you drank it and how much you consumed. Intoxication is the result and that has consequences.

On the one hand it could see many consumers vomiting through the sheer speed and volume of the drink they have consumed. It is never pleasant cleaning up after that kind of behaviour.

On the other hand this intoxication can lead to aggression and fighting would often be the result. Again not something a publican wants in their pub.

Hence the bad reputation that snakebite quickly gained, and why some publicans banned it from being served.

Well it is definitely not illegal to drink, you can mix any number of concoctions at your home bar. This is probably the best place to try it, if you have never had it before.

Is it illegal to serve it in a pub?

I don’t think so, there is no actual evidence that cider and lager mixed in a pint glass is illegal. Even though some publicans may say so when asked for it. It is probably easier to say they can’t serve it rather than to say they will not serve it.

What some bartenders will do is serve you half a pint of cider and half a pint of lager along with an empty pint glass. It then becomes a do it yourself job.

What Are The Snakebite Variations?

This is a bit of a minefield as a lot of the variations are down to geography, as are the names.

I know a snakebite as cider and lager mixed in a pint glass.

I believe in America a snakebite is half hard cider and half stout, Guinness being the common one.

The first variation I know is the addition of a splash of blackcurrant cordial. I know this as a snakebite and black, or a diesel.

Other names for snakebite and black are Purple Nasty, Blueharts ,Snakey B and Red Beer, but there are bound to be more.

The American version of cider and stout is also known as Poor Man’s Black Velvet. The original Black Velvet is stout and Champagne mixed together.

Other drinks added to a snakebite can be orange, vodka and Pernod amongst others. When adding a spirit shot on top like vodka, it becomes a Turbo Snakebite.

I guess you could add anything to a snakebite and call it what you like.

Why Is Snakebite So Strong?

The standard snakebite is not that strong, whether you mix cider with lager or stout. However this can be ramped up by using strong cider and lager.

But there is a misconception that mixing cider and lager together has some kind of chemical reaction. This is why snakebite is so dangerous and has got a bad reputation.

I don’t believe there is any kind of chemical reaction at all, it comes down to the way we think. Snakebite gained a bad reputation for reasons I explained earlier. This then evolved into a purely psychological effect, its reputation for being lethal was stronger than the drink itself.

I was always told by my elders you know the wiser ones (I’m one now), that mixing drinks was bad and would end up in certain intoxication along with vomiting and a violent headache. Snakebite then is the perfect drink for the job.

So snakebite is a simple fruity light crisp drink that was a victim of its own success.

Typically back in the 80’s it was younger people that consumed snakebite. It was a favorite among college and university students.

Your general go out and get drunk on a Saturday night youth favored it as a go to drink for the purpose.

Punks used to like it too (I know I was one), as well as goths (I was one of them too, I evolved). The latter often added the blackcurrant for the red blood like appearance, it went with the attire.

These days the snakebite is not so popular, although older people drink it too. Probably because they were the young scamps that were drinking it in the 80’s.

Nothing like a trip down memory lane, in fact that’s a good idea. I must buy some cider and lager this weekend. I promise I won’t dress up as a punk or goth though 🙂

It is fair to say that the original snakebite didn’t actually bite you. Unless of course you drank copious amounts so it, in which case any alcoholic drink would bite you too.

I also think it is fair to say that snakebite doesn’t deserve the reputation it gained in the 80’s. It was built on crazy youngsters (I was one of them), consuming way too much. This possibly then turned into a psychological effect rather than it being a lethal drink.

Have you had a snakebite?

Try ordering one in your local pub and see what reaction you get, then share you thoughts below. It will be interesting if the snakebite still holds its reputation to this day. Also if you got one did you like it?

Remember drink responsibly, don’t get bitten by the snake.