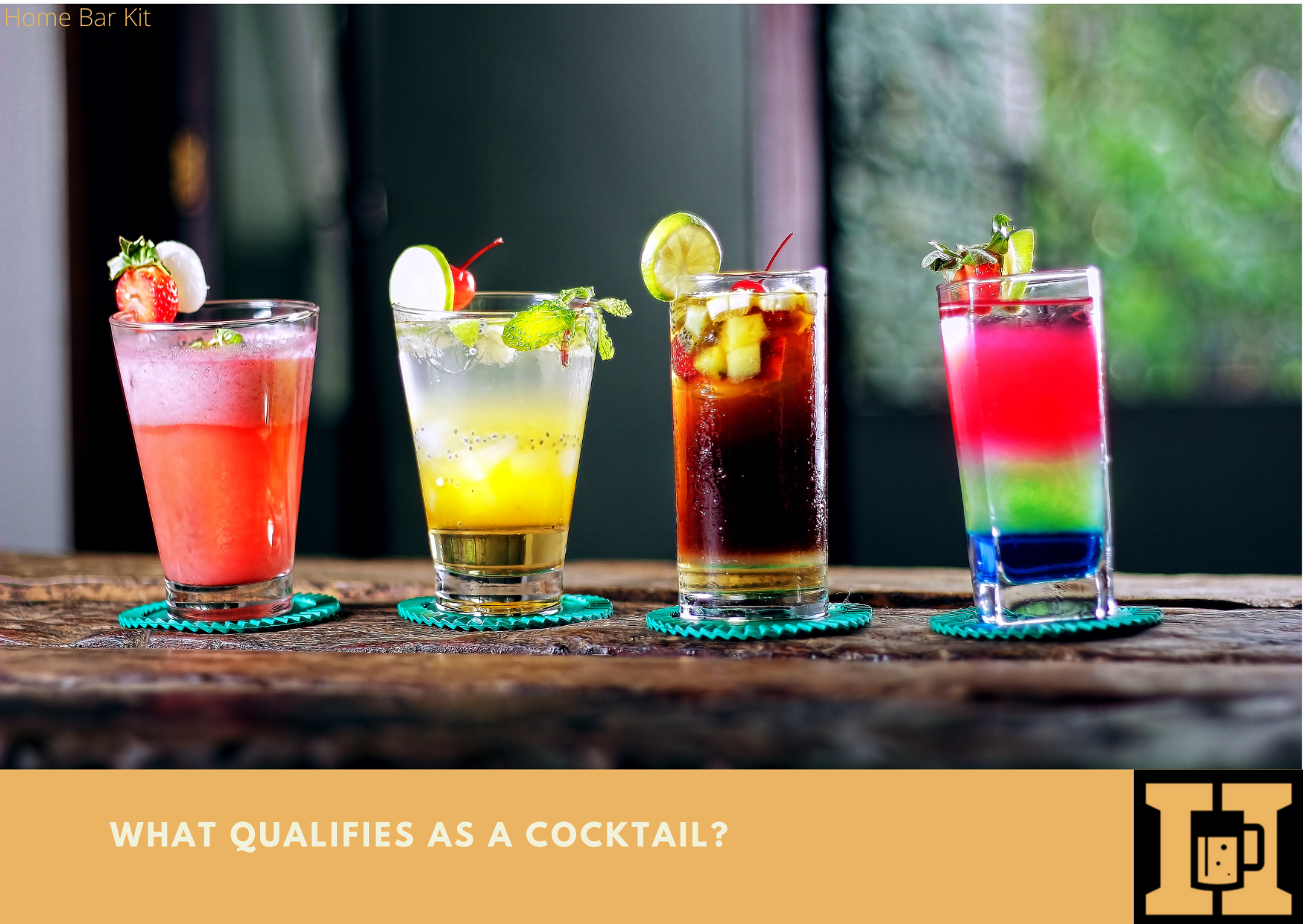 A tricky subject split by debate with different opinions over what a cocktail actually is and its origin. Many questions arise when we look into the world of cocktails. Some are not really bothered and will mix what they want. Others constitute a cocktail as several specific ingredients for it to be a cocktail. So what qualifies as a cocktail?

What Qualifies As A Cocktail?

In general a cocktail is seen as a spirit mixed with other ingredients such as fruit juices or creams. It can also be a small mixture of food ingredients such as the prawn cocktail. A cocktail expert may describe a true cocktail as being made up of certain elements. A spirit base, a modifier such as another softer spirit or fruit juices or creams, and the bitters or syrups for flavoring and coloring. Anything else is just a mixed drink.

If a cocktail has certain elements, then those I mention above are just mixed drinks.

The Definition Of A Cocktail

When we want to know what something means we usually get out the dictionary. Nowadays we tend to Goggle it (or use other available search engines). More often than not these searches land us on a page with a list of online dictionaries. So here are the results.

I can hear the screams from those that will not accept it. I am no cocktail expert and I understand those that are shouting in the wings with a clench fist raised. They might be saying that all cocktails are mixed drinks, but not all mixed drinks are cocktails. We may call them pedantic, but we can all be pedantic sometimes.

What Is A Hoover?

I haven’t gone mad, it’s just an example of how I can be pedantic sometimes, and we all are sometimes.

A vacuum cleaner is an appliance we use to suck up dirt from our floors, or upholstery. Myself and M’lady vacuum our floors regularly, as does everyone. However when I hear the vacuum cleaner referred to as a Hoover, when someone says they are going to Hoover their carpet. You will see me shouting in the background waving my fist in the air.

A Hoover is a vacuum cleaner, but not all vacuum cleaners are a Hoover. I know it doesn’t matter, but it has become a hobby of mine, it amuses me.

Definition Of A Cocktail Part 2

Okay so back to the subject in hand and the definition of a cocktail. What else can it mean?

A mixture of a number of things, a combination or blend of different things put together. We have a fruit cocktail, a prawn cocktail and a seafood cocktail served as an appetizer. A cocktail of drugs used in medicine, the ladies even have cocktail dresses, an attire for sipping cocktails.

In years gone by it may have referred to a horse with a docked tail. Horses that were not thoroughbreds had their tails docked. Also a man of little breeding that passed of as a gentleman. Thank goodness things have changed.

Where Is The Cocktails Origin?

Another can of worms opened. This is also up for debate, who invented the cocktail. It has been penned as an American invention, or was it a British creation originated from old punch recipes. France gets a look in, as do the Romans. Even the Egyptians have a claim to the first cocktails ever to be mixed.

Tom Cruise as an Egyptian, now there’s a blockbuster film.

All the origin claims are about mixing different ingredients, whether that be two, three or more. The common theme is at least one of them was alcohol of some kind. In the 17th Century the British Navy encouraged their sailors to drink ‘Grog’, basically rum and water. I wouldn’t class that as a cocktail, but it is still a mixture of drinks.

The debate will go on, but the bottom line is that a cocktail as we know it in hospitality is a mix of drinks. Merchant & Makers have written ‘A Brief History Of Cocktails’ which is interesting. Take a look if you want to find out more of the history.

What do you call someone who makes cocktails? Yet another can of worms opened. I know I can’t help myself, but is there a clear definition of what a cocktail makers is called?

Bartender is the obvious one, but there is a division among those that mix drinks (sorry cocktails). To me a bartender looks after the bar as a whole, it is not just about serving drinks. A bartender makes it a great experience for the customer.

Not all bartenders may be skilled in mixing cocktails, but does that mean someone that is skilled is not a bartender any more.

What about a ‘Bar Chef’ or a ‘Drinks Chef’, no they won’t do, it’s a ‘Mixologist’ of course. I am by no means putting this title down. I do see the sense in differentiating between a bartender and someone that specializes in mixing cocktails.

Just a little confused, apparently not all mixed drinks are cocktails, they are just mixed drinks. So who came up with the term ‘Mixologist’ as a title for a cocktail maker. It screams someone who mixes drinks, which are not all cocktails.

Surely ‘Cocktologist, would be a better title for a skilled cocktail maker.

I see a cocktail in general as a combination of ingredients put together. Whether this be drinks, food or medical drugs. So to me a ‘Light & Bitter’ is a cocktail of two beers. I might need to keep a low profile for a while after that comment.

However this does not take away the skill of a person that can mix cocktails. I have a Nephew in Australia who is a bar manager. He runs the bar (manager), serves drinks (bartender) and mixes cocktails (?). I have enjoyed some of his cocktails and he is good at it.

I am sure I will be corrected at some point, and I am not saying I am right, but we all see things differently. How do you see things? Share your thoughts below.