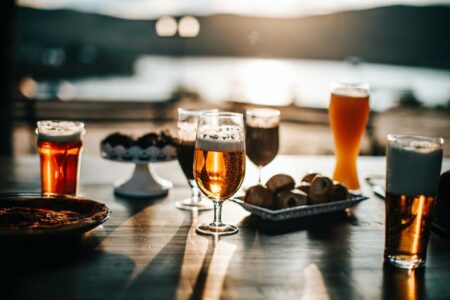 A beer is a beer and the glass it is served in does not matter, just pour the beer.

There will be some people that agree with that statement, but I suspect the majority of beer lovers will not, and probably have a few stern words to say on the subject. Whether you are enjoying a beer in your favorite bar, or at your own home bar, then you need a vessel of some kind to pour your beer into.

When I say vessel, I mean a glass of course, but what is the best glass for beer? Let’s investigate.

Bottle, Can Or Glass 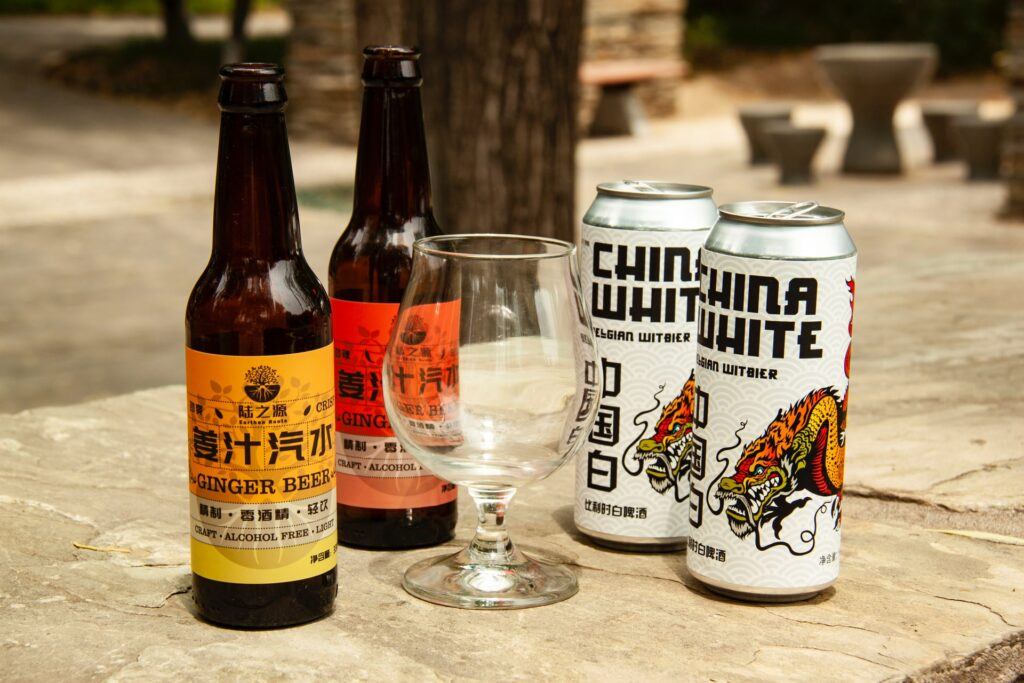 Just like a beer, we are all different, in the things we like or dislike and also in the way we do things. So, which is your favorite way to drink a beer? Is it bottle, can or glass?

Does it really matter whether you drink your beer from a bottle as opposed to a can, or is a glass best?

But what about the can?

The can is probably the easiest way to mass produce and ship your beer around the world, if you were a large brewery that is. No matter what the beer, from a light lager to a deep stout, you can get it in a can.

There has been an increase over the last few years in the amount of canned beers being supplied and the sale of them too. A can will protect the beer from sunlight as well as oxidation, which some say can affect the flavor of the beer.

There are those that won’t even buy a beer in a can because they say it gives the beer a metallic taste, but because the way the cans are lined, apparently this is not so.

There has long been a debate between these two vessels, where most people say beer is better from a bottle instead of a can. But, blind taste tests have in the past revealed that there is no consistent difference between the taste of beer from a bottle as opposed to a can.

There has been an increase in the craft beer industry using cans to ship there beer, if they are doing it, then surely a can must okay.

I think we can all agree that a beer from a draft pump is a better beer than that from a bottle or can. Is this because a draft beer is always served in a glass?

I think the reason that a draft beer tastes better is that it gets a different carbonation level than you get from bottles or cans. The beer is fresher, normally out selling bottles and cans in a busy bar.

Forget the draft/glass relationship for now, and lets just address whether beer tastes better in a glass.

Just like wine glasses pouring your beer into a glass will give you the aroma of the beer which can play a big part in how the beer tastes or how we perceive the beer to taste. We all know our sense of smell plays a big part in what we taste, we kind of partly taste through smell.

Then there is the carbonation that is activated when you pour your beer into a glass, that creamy white head that forms on top all play a part in the aromas and the taste. It’s about what we see too, line up a perfectly poured beer in a glass next to a bottle and a can of beer.

Which one would you drink?

I know which one I would grab and I am sure you know too, the beer in the glass. The thing is, if we have decided that there are a few advantages to drinking our beer from a glass, then it might pose the question.

If a glass, then which glass?

That is true, a beer glass is a beer glass, but they are not all created the same. Basically there are many types of beer glasses, each one designed to give you a different experience. There are glasses that have been designed specifically for a certain beer, just to get the most out of it.

One that pops to mind is Spieglau the Bavarian glass maker who designed a glass specifically for IPA’s, working with Sierra Nevada and Dogfish who tested several of Spieglau designs, and ended up choosing the same one.

This means a beer glass is more than just a beer glass, there are different shapes, which will give you a different experience with your beer.

I guess it makes sense to have a look at some popular beer glasses available for us to enjoy our beer. 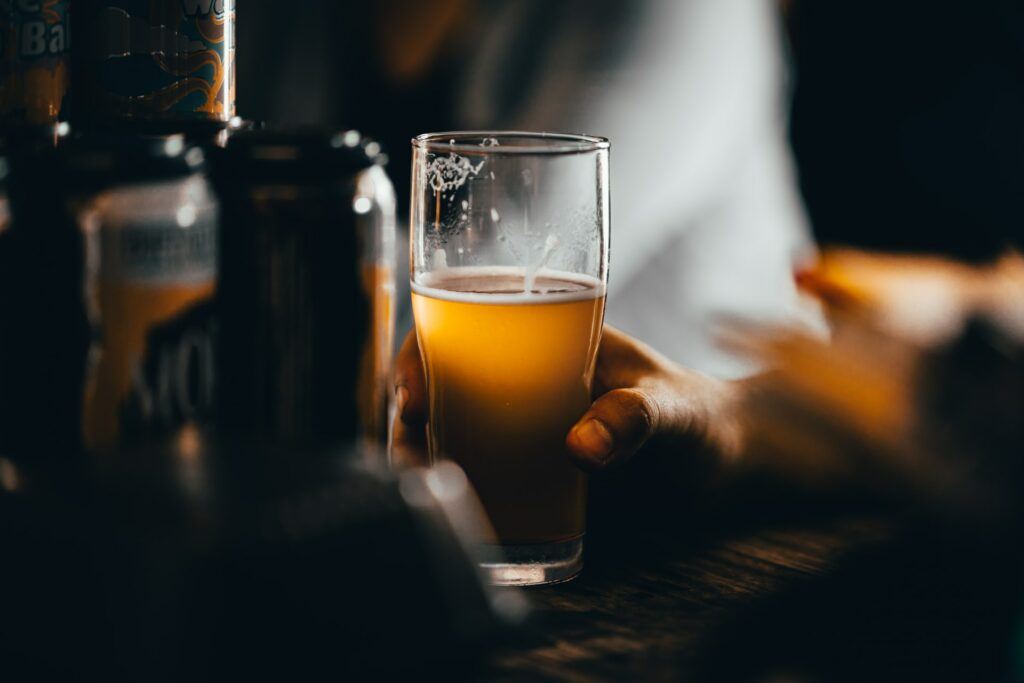 The most common beer glass is the 16oz straight pint glass which is conical being slightly wider at the rim than the base. This is known as the shaker pint in America and serves many beers, even though many say it shouldn’t.

You will see pretty much any beer being served in this glass, mainly because it has become the most commonly used glass for beer around the world.

Many breweries have their own branded glasses in this design, which you will find in most bars, as long as they serve that beer.

There are many variations of this glass, some being almost completely straight as opposed to the more exaggerated cone shape. There are those with ridges and bulges near the top, but overall they all resemble the straight beer glass. 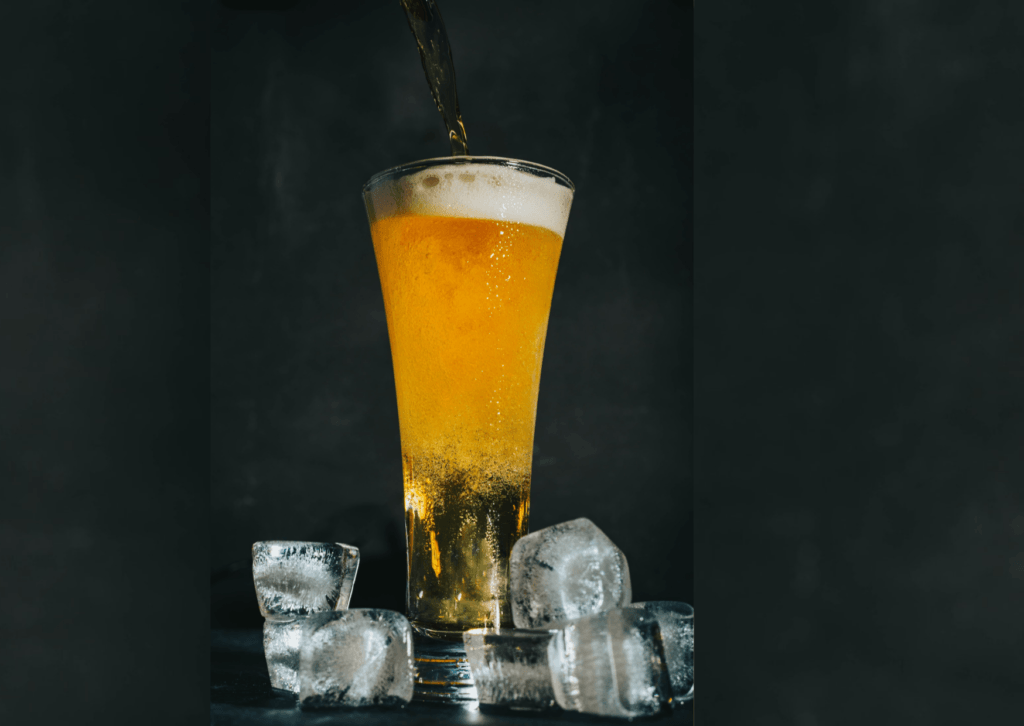 This is another glass that was designed for a particular beer, obviously that beer is pilsner, the very pale lager. The glass is smaller than a pint glass and has a narrow base and a wide rim to make the most of those aromas at the nose.

Being tall and lean this glass will hold the foam for longer and let the aromas flow to the wider rim. There are slight variations to the pilsner glass, with some designs introducing subtle curves, and even stems, pure madness.

On some pilsner glasses (as with some other tall glasses) you will find a small design that is etched into the base. This is to bring a steady flow of bubbles to the rim, bringing with them those beautiful aromas and maintaining the foam head. 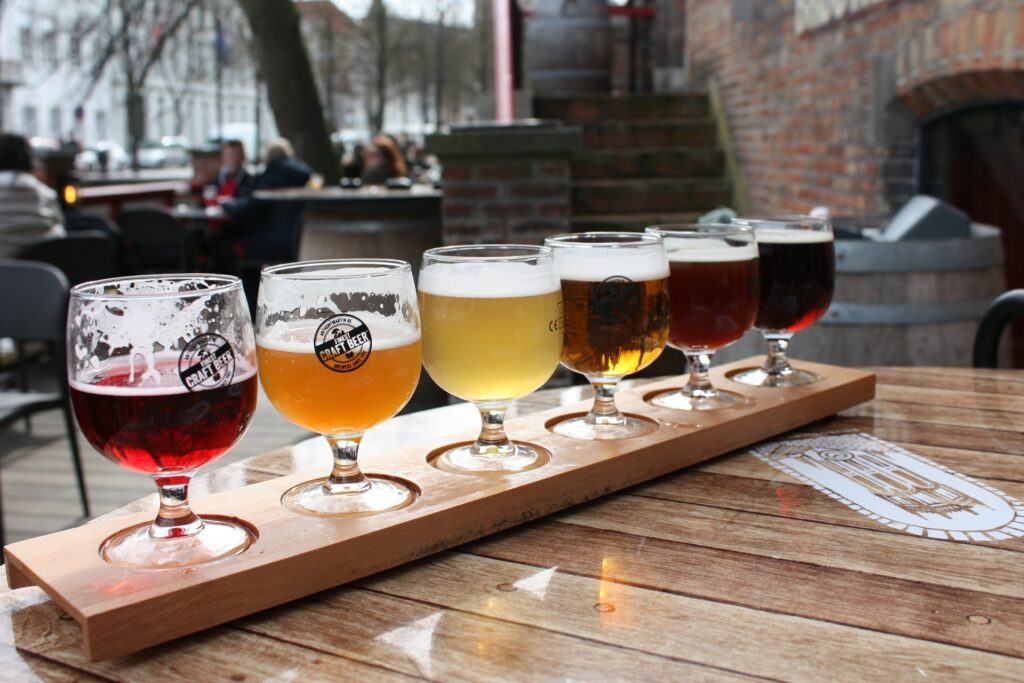 The goblet or chalice glass is a large bowl type design on a short stem, which are suitable for Belgian ales and German bocks, or any heavy or dark beer.

The wide rim makes for big gulps of beer if you choose and helps to retain the head. Again there are many variations in design, but the overall shape remains the same.

A world renowned beer has this design for the drinking of their beer, and the reason is to enhance the beers flavor through optimal release of the aromas and the maintenance of the white head. The beer is of course Stella Artois.

I do like this type of glass, it makes for a great beer drinking experience, plus the beer feels a little more special than in your standard straight glass. 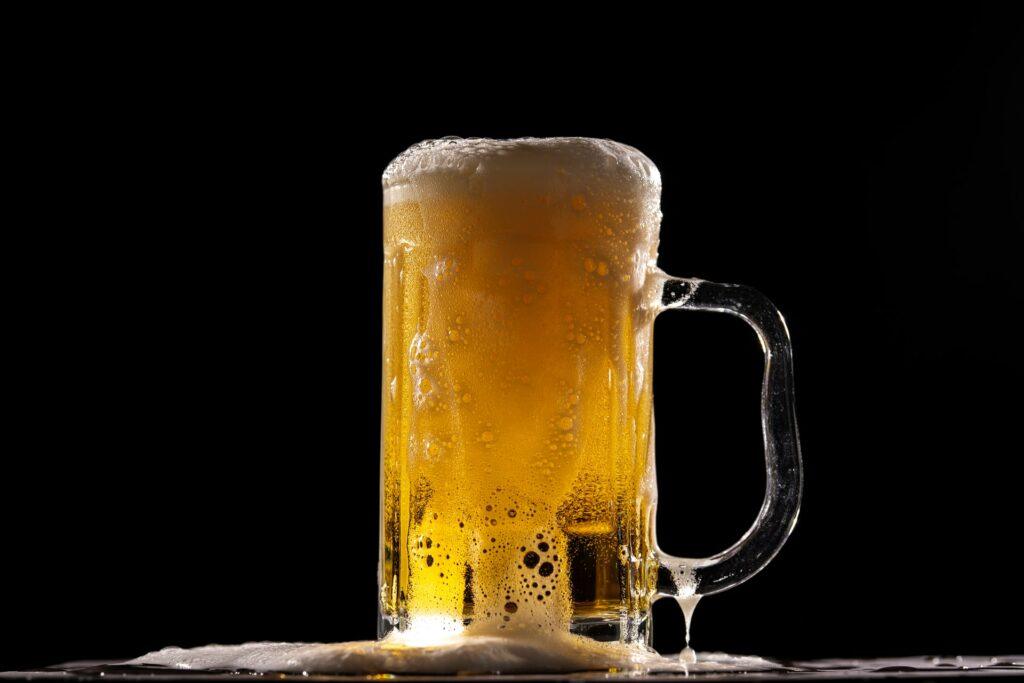 The Stein which started out as a stoneware jug in Germany has since been copied with slight variations into glass jugs emulating the original stoneware. The original stein through time ended up with a lid, said to keep the flies out of the beer.

The glass versions which you can get in a standard half litre or a full 1 litre version do not have lids. These are thick heavy glasses and when full of beer the 1 litre glass can be heavy to lift, you may need 2 hands.

There is a similar type glass that has been popular in Britain for many years, known as a mug or jug of beer, which come in half pint or full pint versions. They do vary in design but the most recognizable one has a slight roundness to it and dimpled glass walls.

You could say the American and Canadian pitchers are along the same lines, although you do not actually drink out of a pitcher. 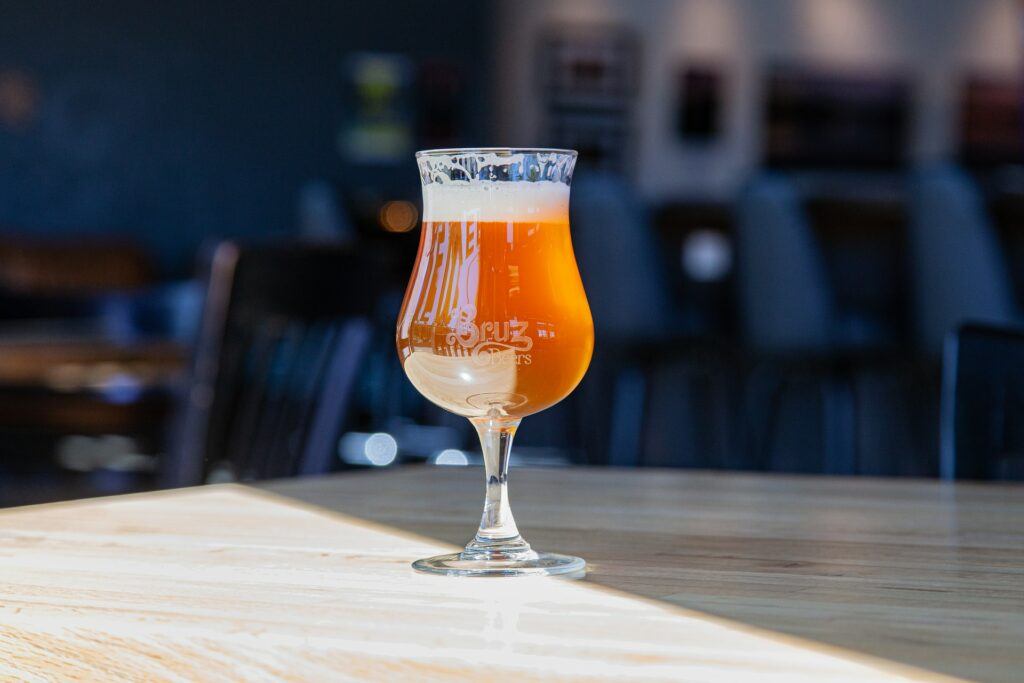 As the name suggests, the tulip glass is just that, the bowl is the shape of a tulip flower. The glass has a short stem and is best for strong aromatic beers like Belgian or Scottish ales. The Belgian ale Duvel has its own tulip design glass to enhance the brews flavor.

A tulip glass is quite similar to the goblet and chalice designs, and does a similar thing in bringing the aromas to the surface, while maintaining the head.

Although I love the tulip flower, I prefer the rounder goblet glass to the tulip shaped glass.

I could go on with more types of beer glasses, such as the Flute, which is ideal for fruit beers and Belgian lambics, and of course Champagne. We have the Weizen designed for wheat beer that produces a frothy head. The Snifter known for its service to brandy can be used for big flavor beers with plenty of aromas. The Stange which is a smaller straight glass and for more delicate beers like Kolsch.

This list could go on, and maybe I will come back and add to it.

If you are a true bottle or can person, then maybe you might now try your beer from a glass. With the explosion of the craft beer market and all the different types of beer we now have access to, then it makes even more sense to pour the beer into the glass.

Remember you are getting the look, the aromas and the fluffy head to see before you even taste the beer.

Now on top of the choice to drink your beer from a glass instead of a bottle or can, you have a generous amount of glass designs to chose from, each one might give you a different beer drinking experience.

When you have tried some different beer glass designs, then share your favorite beer glass below and how it enhanced the beer, or not. We may even be able to figure out what is the best glass for beer from the most popular choice. The main thing is, whether you drink from a bottle, can or glass, just love the beer you drink.